The Wire Troll: Zac Gallen is Ready For a Shot 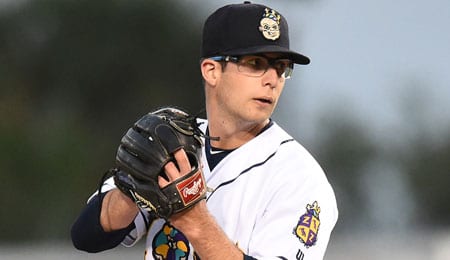 Zac Gallen is ready for a big league shot. (Milb.com)

Welcome back to another week of Fantasy baseball. With the first month of the season nearly over, we’re starting to get a better idea of just how good or bad our teams are, and how we need to use the wire to fill any holes.

This week, Mets reliever Jacob Rhame earned a two-game suspension and fine for trying to remove Rhys Hoskins‘ head with a pitch; the Cubs are being very non-committal about when suspended shortstop Addison Russell will return to the team; and the Yanks have acquired Cameron Maybin from Cleveland in an effort to fix their injury-ravaged outfield.

And now, let’s get to this week’s Fantasy baseball waiver wire recommendations, with a definite accent on the future in this particular installment…

Zac Gallen, SP, Miami Marlins (ESPN: 0.1 per cent; CBS: 4 per cent): One of the players Miami acquired in the Pablo Ozuna deal, Gallen looks like he’s ready to start paying dividends for the Fish. Pitching at Triple-A this season, Gallen has been absolutely dominant, surrendering just one earned run through 25 1/3 IP (0.36 ERA) while fanning 31 and walking four. It’s clear that when injury or ineffectiveness opens up a spot in the Marlin rotation, he’ll get the first crack. Last year was Gallen’s first full season at Triple-A, and he wasn’t bad (3.65 ERA), racking up plenty of Ks (see video below), but now it’s obvious he’s ready for the next step. His changeup is his best offering, but command will be his ticket to success. Sandy Alcantara was the hurler Miami received for Ozuna that earned all the hype, but Gallen could wind up being just as good or better in time.

Nick Anderson, RP, Miami Marlins (ESPN: 24.7 per cent; CBS: 6 per cent): Looking for Josh Hader Lite? How about Anderson, who has fanned 22 batters in 11 innings so far, compiling a fine 2.45 ERA in the process? He earned his first hold last week as he slowly moves into a more responsible role. Anderson is attractive enough to be worth a bid in deeper leagues, even if he’s several pitchers deep in the Marlin pen, so unlikely to bag saves any time soon.

Wander Franco, SS, Tampa Bay Rays (ESPN: 1.3 per cent; CBS: 22 per cent): With Vladimir Guerrero Jr. called up to Toronto, Franco takes over as the top prospect in the game. Franco plays brilliant defense and has elite hit and power tools. He was inked in 2017 as the top international prospect — at age 16. Last year, Franco showed amazing contact skills at Rookie-Ball. Having moved to Class-A this year, he’s piling up the counting cats and showing even more power. There’s no better prospect in dynasty play right now.

Michael Chavis, 3B/2B, Boston Red Sox (ESPN: 6.6 per cent; CBS: 31 per cent): With Dustin Pedroia out, Chavis has been recalled to replace him and has quickly flashed his power. On Tuesday, Chavis smoked his first career homer — a ball literally hit out of Fenway Park. He spanked another dinger on Thursday and has scored and driven in four runs over the last three games. Chavis hadn’t been hitting that well to begin the season at Triple-A, but he’s definitely shown what an extra-base threat he is since his recall.

Carter Kieboom, SS, Washington Nationals (ESPN: 7.1 per cent; CBS: 44 per cent): Kieboom has soared through the National system and made his MLB debut on Friday. All he did in his first contest was hit the game-tying home run. It’ll do. Kieboom’s batting eye had really improved at Triple-A, so he looks like a nice short-term add while Trea Turner is out.

Tyler O’Neill, OF, St. Louis Cardinals (ESPN: 3.2 per cent; CBS: 24 per cent): O’Neill (arm) returned to action on Friday, and while he went hitless in his lone at-bat, this is a dude you want to consider. This kid could rack up a lot of extra-base knocks this season even if his batting eye remains a work in progress.

Daniel Brown, RP, Milwaukee Brewers (ESPN: NA; CBS: unowned): The Brewers could have another power arm on the way in Brown. Despite some wildness, he’s been extremely effective (1.00 ERA) to begin the season at Double-A. Brown’s become much more of a groundball pitcher this season, and that’s really helped. If it sticks, he’ll likely get a look in the bigs at some point this year.

Chase Anderson, SP/RP, Milwaukee Brewers (ESPN: 4.2 per cent; CBS: 24 per cent): After beginning the season in the bullpen, Anderson has moved back into the rotation and been decent, although he was a tad inefficient on Friday and had to settle for a no-decision as a result. Still, he’s undefeated so far with a nice 3.20 ERA so looks like a possible streaming option. Anderson’s groundball rate has dipped for the second straight season and he’s giving up more line drives this year, so that’s a concern, but so far he’s been able to mostly pitch around it.

Sergio Romo, RP, Miami Marlins (ESPN: 8.1 per cent; CBS: 22 per cent): He’s not exactly the most coveted closer around, but Romo does have four saves in four chances, and has pitched much better after getting tagged in his season debut. He’s tossed four straight hitless outings, and while it doesn’t look like he’s going to be worked as hard as he was last year, he can still be effective. Romo’s WPA, for example, while still below average, has improved to .65 this season.

Late American funk singer Leon Haywood spent over half a century making music, and his best known song and biggest hit was released in 1975, “I Want’a Do Something Freaky to You.” It also appeared on a 1993 compilation called Funky Stuff: The Best of Funk Essentials.

By RotoRob
Tags: Zac Gallen
This entry was posted on Saturday, April 27th, 2019 at 4:03 pm and is filed under BASEBALL, RotoRob, The Wire Troll. You can follow any responses to this entry through the RSS 2.0 feed. Both comments and pings are currently closed.