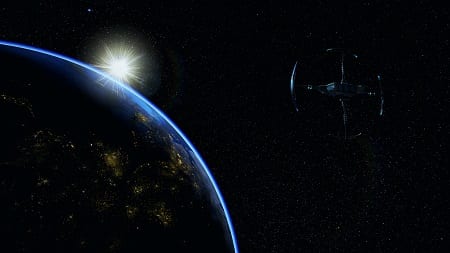 Something went wrong aboard the station. It’s up to you to find out what.

When we first saw the trailer for The Station it immediately reminded us of Tacoma, the sci-fi mystery title that challenged you to learn the fate of a six-person crew aboard a seemingly empty space station. Now, after experiencing The Station first hand, it’s fair to say it has a lot in common with Fullbright’s 2017 release.

In The Station, you’ll jump far into the future when an inhabited planet has been discovered. After some debate the government dispatches the Espial, a technologically advanced space station that can observe and study the planet’s population from orbit without being detected thanks to its cloaking technology.

However, things go awry shortly after a report is sent stating that the inhabitants are both violent and intelligent, with communications and cloaking going down. Fearing what might’ve befallen the three-person crew, the government dispatches a reconnaissance specialist (that’s you) to ascertain what happened.

Once you’ve arrived you’ll set about exploring the Espial with straightforward objectives like restoring power and locating the missing crew members. You’ll fill in a lot of the blanks as you go about other things as well, finding audio logs and notes that flesh out the events leading up to the crisis along with the personal relationships/feelings among the crew.

While the writing is decent, the voice work is pretty bad, getting exposed even in the short audio files. Thankfully the music and sound effects fare better in creating a sometimes lonely, sometimes foreboding atmosphere. The graphics are decent, adding the detail work that gives the station a lived in sort of feel, but the overall presentation is middling.

Where The Station does its best work is in the practical design of the puzzles. One example is needing to repair a droid so it can grant access to another area. Here you’ll need to read the droid’s schematic to see what’s needed, locate the appropriate parts by deciphering the storage manifest, identify functional from non-functional units (e.g., working units glow in the dark so you need to momentarily cut power) and finally install them. It’s well thought out.

You’ll need to be observant and diligent to find everything with some items — such as locker codes or access to certain areas — that are unnecessary to completing the game. To that end don’t get lulled into thinking you’ll find missing items or information later on through the mostly linear objectives as returning to previous areas is rare. Just look harder before moving on.

Unfortunately, the payoff for flexing your powers of investigation are underwhelming, ferreting out details of a cardboard romance between two of the three crew members; and seriously, what are the odds that you only send three people on a mission of this importance and somehow two of them are romantically involved? It feels wholly artificial as a manufactured secondary plot line.

Even when leaving no stone unturned you’re like to reach the endgame in a couple of hours with precious little reason to revisit the game minus cleaning up any trophies you missed. The game feels like it races to the end as well. One minute you’re walking around, and the next you’re sprinting to the close. To its credit, though, The Station does feature a rather clever twist that flips the narrative.

The Station is a solid sci-fi walking simulator. Its main plot is good enough to hold your interest, and the puzzles are well designed. That being said, the game’s short run time, poor voice acting and a tacked on love story hurt its appeal.

By HC Green
Tags: Tacoma, The Station, Video Game Review
This entry was posted on Tuesday, February 20th, 2018 at 2:48 am and is filed under Herija Green, Video Game Reviews. You can follow any responses to this entry through the RSS 2.0 feed. Both comments and pings are currently closed.