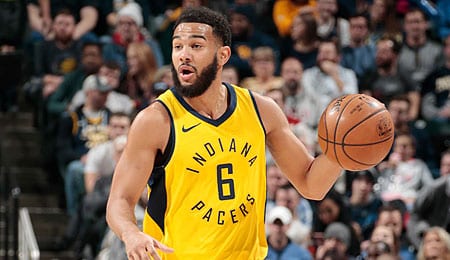 Cory Joseph has been running the Pacer offense in Darren Collison’s absence. (NBA.com)

Welcome back to another week of Fantasy basketball. This weekend is the NBA All-Star game, a time when people take advantage of some of the crazy prop bets out there. Below is a list of 2018-19 All-Star moneyline odds — a great resource for those of you in keeper formats. If you are uncertain how this works, this guide on how to bet the monleyline here provides an insight into parlays, teasers and how the moneyline works by picking straight-up winners.

In looking at this list, we get a sense of who the oddsmakers think will be the stars of tomorrow. For now, we leave you with this list of players we recommend you pick up for your stretch run.

Cory Joseph, PG, Indiana Pacers (ESPN: 2.1 per cent; CBS: 9 per cent): With Darren Collison out, Cory Joseph has been starting for the Pacers, and while his offense has been modest, he sure came through nicely on Wednesday with a double-double (15 points, 11 boards). Obviously, Joseph’s PT is up lately, but he’s struggled from downtown, so it was nice to see him hit his only attempt Wednesday. In fact, since a hot start from deep, he’s kind of gone downhill as the season has progressed, and that’s capped his value. Still, we saw was Joseph is capable of as a starter in Toronto last season, so as long as he keeps starting (perhaps not much longer), he’ll be a potential asset. He’s a great defensive player, and one of the better Canadian-born players currently playing in the NBA. He certainly has a big fan in Spurs coach Gregg Popovich (see video below).

Dwight Powell, PF/C, Dallas Mavericks (ESPN: 30.4 per cent; CBS: 49 per cent): Powell is on fire offensively of late, recording at least 18 points in each of his last four games. His touches are up lately; in fact, he’s getting more than twice as many looks per game as he had in January. Powell has found himself in the starting lineup fairly often, and if his solid play continues, he could become a fixture there. The fact that his rebounding is also on the rise doesn’t hurt, either. Another Canadian kid, Powell is a fine face-up shooter, and his shooting touch has been off the charts in recent games, so he’ll provide a nice boost to your FG percentage as well.

Mario Hezonja, SG, Orlando Magic (ESPN: 24.1; CBS: 49 per cent): Hezonja has been taking advantage of a couple of injuries in Orlando and has really been shining lately, scoring at least 21 points in each of his last three games. His PT is way up recently and he’s averaged two treys so far this month. Barring injury, Hezonja should surpass his game total from last season, and right now he looks like a spectacular DFS play before his PT wanes as the team gets healthy. Taken fifth overall in 2015, this Croatian has been playing power forward of late, so he’ll likely gain eligibility at that position soon, providing even more value to his owners.

Ivica Zubac, C, Los Angeles Lakers (ESPN: 0.6 per cent; CBS: 5 per cent): Zubac was having a decent rookie effort in 2016-17 before suffering a season-ending injury. Now healthy, he’s been very quiet this season until exploding for a double-double in just 20 minutes of play on Thursday. Zubac nailed 8-of-8 from the floor for a season-high 19 points and pulled down 11 boards, including four on the offensive end to catch our eye. His PT is rising lately, but he’ll still need more yet to retain value, so at this stage, consider him someone to watch closely or perhaps pick up on a speculative basis in a very deep format. Don’t forget that the Lakers gave Zubac a chance to start for a stretch last season, so he’s definitely a name to track.

Wilson Chandler, SF, Denver Nuggets (ESPN: 38.3 per cent; CBS: 47 per cent): This veteran had been in an awful scoring slump, but seems to have awoken, scoring at least 11 points in each of the last four games, including 17 on Tuesday and a season-high 26 last Saturday. Chandler’s touches are up significantly of late, although he’s not canning his FTs with his usual accuracy. It seems clear he’s not going to be able to duplicate the big season he had in 2016-17, but a similar second half could be in the offing. If nothing else, the fact that Chandler has canned three treys in two of the last three games has to appeal to Fantasy owners.

Alex Len, C, Phoenix Suns (ESPN: 12.3 per cent; CBS: 44 per cent): Len’s touches are down this season, but he’s been more effective when he gets the chance.

Andrew Harrison, SG, Memphis Grizzlies (ESPN: 12.4 per cent; CBS: 42 per cent): Harrison went off for a career high 28 points on Wednesday, cementing his role in the starting five for the Grizz.

By RotoRob
Tags: Cory Joseph
This entry was posted on Saturday, February 17th, 2018 at 2:08 pm and is filed under BASKETBALL, RotoRob, The Wire Troll. You can follow any responses to this entry through the RSS 2.0 feed. Both comments and pings are currently closed.