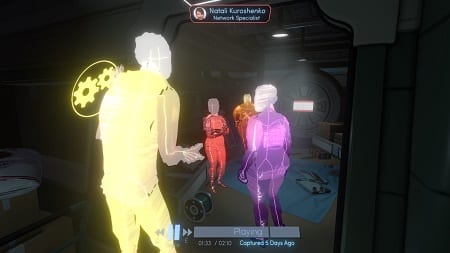 It’s impressive how much character development is crammed into Tacoma.

Developer Fullbright put itself on the map with 2013’s Gone Home, a PC-only release that was finally ported over to consoles last year. The narrative-driven experience is among the best of the so-called “walking simulators,” and fans of the genre have been looking forward to Fullbright’s next endeavor, entitled Tacoma, since it was announced in late 2014.

Although the game takes place on a space station, only the central hub operates in Zero-G, so the fact that floating doesn’t control very well — as far as we could tell there’s no way to adjust altitude, you just point where you want to go and push forward — isn’t an issue. Other than that you’re simply exploring the various wings and manipulating the recordings, all of which works just fine.

Tacoma looks decent enough, though that’s more about the detail put into creating the lived-in feel of the space station versus any sort of cutting edge graphics. That aspect is well done, and the game does a nice job of offering additional insight into its characters for those willing to take the time to dig around offices and living quarters.

While its visual beauty may be in the eye of the beholder, Tacoma‘s voice acting is strong as the crew’s performances bring the characters to life and create the emotional attachment necessary to make the game work. It starts with Minny‘s adorable “OK” during the docking sequence and continues until the credits roll.

You play as Amy Ferrier, a contractor hired by the Venturis Company to investigate the events that unfolded on its Tacoma space station and then retrieve the ODIN A.I. You’ll explore each of the three sections sequentially by unlocking and viewing recordings that explain how the crew came to their fate after some kind of explosion compromised the vessel’s oxygen supply.

A total of six people inhabit the station, and Tacoma shows how they react to the crisis, what their role is in attempting to survive it and the interpersonal relationships between them. There aren’t many “vital” recordings — one or two per section — but, as noted, there are additional recordings, notes and electronic correspondence to flesh out the story.

Primary sequences will need to be viewed several times to get each character’s story for that moment, and a series of question marks along the timeline indicate when crew members have opened up a HUD that you can interact with and retrieve more info. It’s not exactly like putting a puzzle together since there ultimately isn’t a mystery to solve, but it does involve filling in the blanks.

As enjoyable as exploring the station and getting to know the crew is, Tacoma contains no threat or danger at any point, and if you stick to the main arc you can probably wrap things up in 90 minutes or less. Even taking your time and delving as deep as you’re able won’t push it past three hours. For some that might not feel like enough content for the asking price.

Whatever its shortcomings as a “game,” it tells an interesting, well conceived story, however, and we bought into the crew’s struggle and enjoyed the late twists and turns. In fact, it has more going for it than many of the sci-fi films we’ve seen over the last year or more.

Fullbright has delivered another thoughtful piece of fiction with Tacoma. If you enjoyed the likes of Gone Home and What Remains of Edith Finch, odds are you’ll find this eminently satisfying.

By HC Green
Tags: Amy Ferrier, Fullbright, Gone Home, Minny, Tacoma, Video Game Review
This entry was posted on Friday, September 1st, 2017 at 7:31 pm and is filed under Herija Green, Video Game Reviews. You can follow any responses to this entry through the RSS 2.0 feed. Both comments and pings are currently closed.