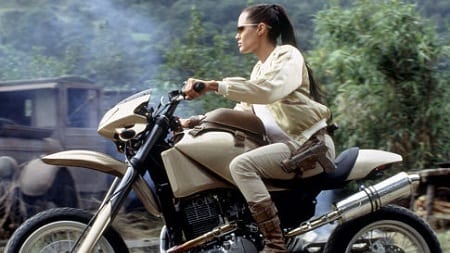 Angelina Jolie as Croft is the best part of Tomb Raider.

It has been more than 15 years since Angelina Jolie first donned the signature short shorts of video game heroine Lara Croft, but with the franchise set for an Alicia Vikander reboot later this year, it seems like an ideal time to bring Lara Croft: Tomb Raider and Lara Croft Tomb Raider: The Cradle of Life into the modern world of 4K UHD.

Each copy includes the feature film on 4K and Blu-ray, the latter of which contains all special features and bonus content. There are no new extras created specifically for the 4K release. A digital copy is included as well.

In her live-action debut, Lara (Jolie) matches wits with the Illuminati on the eve of a once-in-5,000-years celestial event. The stakes are high, as if someone were to collect both pieces of an artifact known as “the triangle” and reassemble it in the proper location it would grant the power to travel through time to change history — for Lara that would be the resurrection of her father Richard (Jon Voight). That ability, along with its destructive power, makes it very dangerous as well.

For an adaptation of a character that could fundamentally be described as “female Indiana Jones,” Lara spends a lot of time around her mansion, and the lack of globetrotting hurts the feeling of this being a grand adventure. Jolie handles the role deftly and appears to be having fun with it. That, along with a supporting cast that includes a pre-007 Daniel Craig and two Game of Thrones actors in Iain Glen (AKA, Jorah Mormont) and Noah Taylor, who played Locke, is the best part of the movie.

There’s plenty of good news for Tomb Raider fans as Paramount has taken its time with the new 4K scan, making it a clear and substantial improvement over the Blu-ray. The resolution and clarity are excellent, and seeing Jolie in her all her UHD glory might be worth the cost of upgrading by itself. Be warned, though, the special effects are pretty rough and look even rougher in 4K.

Learning some lessons from the first film, Cradle of Life installs Pandora’s Box as the MacGuffin, adding some historical context to its fantasy the same way Indiana Jones did with the Ark of the Covenant and the Holy Grail. This time Lara must recover an orb that shows the way to find the Box, which is said to contain a horrible plague that bio-terrorist Reiss (Ciarán Hinds) covets. To do that she’ll need to team up with her ex, Terry Sheridan (Gerard Butler).

There’s definitely more action and a faster pace here, and once again we get to see another young action star (Butler) and GoT alum (Hinds, who was Mance Rayder). Jolie continues to have fun with the character, and the whole thing has even more of a popcorn feel than the original. Still, a handful of ridiculous moments — like Lara punching a shark and then riding on its fin to the surface when it flees — hurt the film’s overall tone and feel out of place.

Cradle of Life sees similar improvements to its predecessor, featuring a markedly better visual experience thanks to its enhanced clarity and colour, though it’s not quite the leap from the Blu-ray version that Tomb Raider is. Cheesy special effects are again done no favours by the improvements.

There’s nothing exceptional about the Tomb Raider films, but they’re reasonably fun and now carry the added element of featuring well-known actors before they hit it big. The 4K treatment is well done, and seeing peak Jolie as Lara Croft in UHD is a good thing.

By HC Green
Tags: Angelina Jolie, Daniel Craig, Gerard Butler, Lara Croft, Lara Croft Tomb Raider/The Cradle of Life 4K UHD, Movie Reviews, Square Enix, The Cradle of Life, Tomb Raider
This entry was posted on Friday, February 23rd, 2018 at 5:16 pm and is filed under Herija Green, Movie Reviews. You can follow any responses to this entry through the RSS 2.0 feed. Both comments and pings are currently closed.