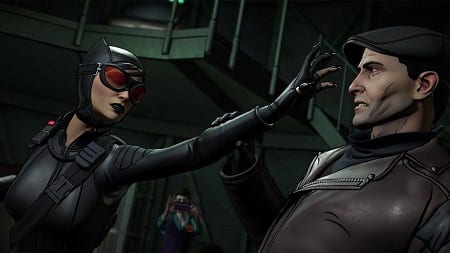 TellTale’s second episode of Batman: The Enemy Within was a departure from the superhero franchise because it spent so much time away from the actual superhero part. That seemed to split opinion (we personally found it to be a fresh take on the Bruce Wayne/Batman mythos). The third episode, Fractured Mask, returns to more of standard form, with the Bruce/Batman split working pretty evenly.

So what’s happening in this episode? It picks up immediately where the previous one left off, which means that Harley Quinn is leading the gang, John Doe is still an endearing not-quite-Joker, Catwoman has returned to give Bruce all sorts of feels. Oh, and there’s a frozen carcass of the Riddler as well.

It’s quite the setup as we get into the middle episode, and Fractured Mask‘s twists follow what you’d expect in the pivotal middle act of the story. Without going into spoilers, both sides of the Bruce/Batman personality have the proverbial screws turned on them across all of the game’s pivotal relationships: Selina/Catwoman, John/Joker, Harley, Gordon, and Amanda Waller.

TellTale episodes tend to vary in the impact of their endings, and one of the drawbacks of Fractured Mask is that it just kind of stops. Perhaps it’s leaving the big cliffhanger twist for the next (and penultimate) episode, but given the short running time (at about 90 minutes, it’s rather short even by TellTale standards), it feels like a little more could have made it in.

Getting back into the Batsuit, The Enemy Within: Fractured Mask shines the spotlight on all relationships — supervillain and otherwise. As all TellTale stories ultimately live and die on the strength of its characters and relationships, Fractured Mask has upped the stakes heading into the second half of the season.

By Mike Chen
Tags: Batman, Batman The Enemy Within, Batman: The Enemy Within - Episode 3, Fractured Mask, Telltale, The Enigma
This entry was posted on Monday, December 4th, 2017 at 8:27 pm and is filed under Mike Chen, Video Game Reviews. You can follow any responses to this entry through the RSS 2.0 feed. Both comments and pings are currently closed.