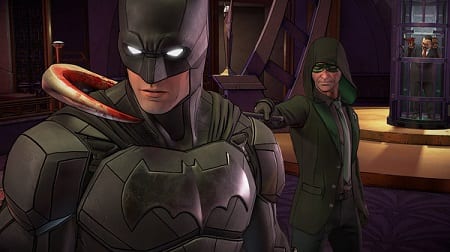 The Riddler figures prominently in The Enemy Within.

TellTale’s Batman series broke new ground with its initial season in two ways. First, it allowed the player to control Bruce Wayne just as much as Batman. Second, it took longtime elements from the franchise’s lore and mixed them in new and unique ways.

This continues with the second season entitled The Enemy Within and its first episode The Enigma. We’ll give longtime Batman fans one guess as to what it’s about.

The Enemy Within is the second season of the Batman series, but it’s the umpteenth release by TellTale and, at this point, the controls are basically the same as they’ve always been.

TellTale makes incremental improvements to its graphical integrity every few years. There’s not much new here with the second season of Batman, but at least much of the stellar voice cast returns.

We’re still not particularly thrilled with this version of the Joker (he feels too derogatory of the Mark Hamill version), but it gets the job done. Visually, the same aesthetic carries over from the first season and doesn’t really deviate from many of the established TellTale styles.

TellTale made the most out of its signature quicktime events in the first season of Batman, but for The Enemy Within, the development team has mixed things up a little bit.

Much as how Guardians of the Galaxy tailored its action sequences to fit the franchise, Batman‘s whole MO behind his combat lies in his ability to strategize and make decisions on the fly, and that is implemented through timed decisions (use an object or punch; gadgets or fisticuffs).

Of course, the quality of TellTale experiences comes down to storytelling, and the first season of Batman ended on a bit of an iffy note. However, TellTale goes back to the idea that its series is more of a Bruce Wayne simulator than anything else, and the first episode gives you the opportunity to explore that in a number of situations.

From casing a casino to dealing with Commissioner Gordon, these things have to be explored in both normal life and in vigilante super-armour. And rather than the signature TellTale “(Person) will remember that” notification, the new version changes to “Your relationship with (person) has changed.”

Whether that makes a difference to the weight of decisions within the engine is unclear. It might just be different user interface text, but it makes a psychological impact on the player as Bruce/Batman make decisions affecting potential relationship choices: friendships, partnerships, family, etc. Everything spiders outward.

All of which leads to the biggest compliment and complaint about the first episode — it feels mostly like setting up the foundation for the whole series. Which is, of course, kind of the point, but usually first episodes also pack a bang to set the tone.

Despite laying the groundwork for familiar adversaries like the Riddler and the Joker (though TellTale continues to remix traditional Batman lore), the pacing and tension can be a bit slow at times.

The Enigma is a solid-but-not-groundbreaking start to the new Batman series. Still, TellTale’s track record has earned it the benefit of the doubt, so there’s optimism that this season will build on the foundation laid here without the mistakes of the first season.

By Mike Chen
Tags: Batman, Batman: The Enemy Within - Episode 1, Telltale, The Enigma, The Riddler, Video Game Review
This entry was posted on Friday, August 11th, 2017 at 7:52 pm and is filed under Mike Chen, Video Game Reviews. You can follow any responses to this entry through the RSS 2.0 feed. Both comments and pings are currently closed.