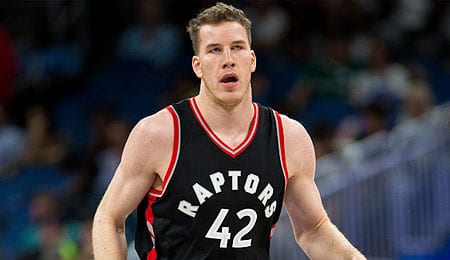 Welcome back to another season of Fantasy basketball, peeps! As always The Wire Troll is here to provide the best waiver wire recommendations to you, and — as always — we only choose players owned in 50 per cent of leagues or less, as we want to give you picks that are actually available in your league. We know, we know… what a concept!

This week, Lonzo Ball got a benching for his 20th birthday; those engaged in NBA betting for the season that wagered on the Thunder got a scare when the team’s charter plane suffered a large dent in its nose, but thankfully, it landed safely Saturday morning; and Draymond Green had some choice words for Houston Texans’ owner Bob McNair.

Jakob Poeltl, C, Toronto Raptors (ESPN: 12.5 per cent; CBS: 21 per cent): The Raptor frontcourt is beat up right now with both Jonas Valanciunas and Lucas Noguiera dealing with ankle woes. This has given sophomore Poeltl a chance to show what he can do, and after back-to-back double-doubles, he flirted with another one on Friday as he gets plenty of burn. Poeltl is also showing he knows how to throw a block party, currently ranked eighth in the NBA with 1.8 per game. The Utah product and Austrian native was one of college’s most productive big men, and now he’s showing he can do it as a pro, too. Hell, the kid even made Kevin Durant look bad (see video below). While JV remains out, Poeltl is a nice short-term play, especially in DFS.

Jahlil Okafor, C, Philadelphia 76ers (ESPN: 8.6 per cent; CBS: 26 per cent): Okafor’s time in Philly is nearly over, as the team seeks to working out a trade. Because he’s barely playing (and now sick, to boot), he offers no current value, but as a stash, he makes a lot of sense. In his only game action this season, Okafor nearly double-doubled with two blocks in limited minutes. Injuries have decimated his first two seasons, but don’t forget how good he looked as a rookie when he was active, earning honourable mention for our Fantasy Rookie of the Year award. The former No. 3 overall pick has talent; now, he just needs health and a place to play.

Dante Cunningham, PF, New Orleans Pelicans (ESPN: 0.4 per cent; CBS: 3 per cent): Purely a deep league option, Cunningham is seeing the minutes as the starting small forward in New Orleans. He spent over half his time starting last season, but early on is getting the most PT he’s ever had in his career. The opportunity is there, and we know the hustle is there (see video below). Can the production follow?

Kelly Oubre Jr., SF, Washington Wizards (ESPN: 15.4 per cent; CBS: 41 per cent): A dude that always seems to be in the middle of some kind of scuffle, Oubre broke out with 19 points, eight boards, four treys, two blocks and two steals on Friday. That’s the kind of effort that gets you noticed in Fantasy circles. He has generally been durable and seems to have really developed his outside game this season (averaging two three-pointers), so it’s time to scoop him off the wire.

Mike James, PG, Phoenix Suns (ESPN: 8.7 per cent; CBS: 38 per cent): James has taken over as the starting PG for the Suns, and the rookie has shown flashes, scoring in double digits every game before an ugly shooting night on Wednesday. As long as Eric Bledsoe remains out, James looks like a nice play. And the fact that Bledsoe may be on his way out of town suggests that James may wind up being more than a short-term add.

Tyson Chandler, C, Phoenix Suns (ESPN: 24.9 per cent; CBS: 29 per cent): Chandler is still a rebounding machine, cranking up three straight double-digit efforts (and nine in the game before that). Okay, so his touches are down this season, but you never expected much offense from him. Worrisome is the rumour that Phoenix would love to package him up when it tries to trade Bledsoe, but for now, Chandler remains a starter. Chandler may be getting long in the tooth, but he looks like a strong play for the time being, while his body is intact.

Austin Rivers, PG, Los Angeles Clippers (ESPN: 13 per cent; CBS: 36 per cent): Rivers has been a revelation early on, putting up three straight double-digit scoring efforts, canning tons of treys and racking up the steals. He saw his most action ever last season, but looks poised to top that this season provided he can remain healthy. Rivers is definitely seeing enough PT right now to be worthy of pickup in all formats. The foot injury to Milos Teodosic that opened the door for Rivers to start could prove to be one of the most important Fantasy developments of the season if this keeps up.

Marvin Williams, PF, Charlotte Hornets (ESPN: 18.1 per cent; CBS: 49 per cent): Williams has been squeezed for minutes in the Hornet frontcourt by Frank Kaminsky early on, but Kaminsky is sick, so may not play Sunday. As a result, Williams makes for a nice DFS flier on Sunday. A full-time starter for the last three seasons, he’s due for a breakout game, and given his performance against the Magic last season (8 PPG, 44 per cent shooting, 10 RPG, 2.5 APG), this could be one. Williams is a valuable role player in Charlotte, but there’s no doubt he’s capable of contributing more than what he’s shown so far.

By RotoRob
Tags: fantasy basketball, Jakob Poeltl, Lonzo Ball, NBA, Toronto Raptors
This entry was posted on Sunday, October 29th, 2017 at 2:58 pm and is filed under BASKETBALL, RotoRob, The Wire Troll. You can follow any responses to this entry through the RSS 2.0 feed. Both comments and pings are currently closed.