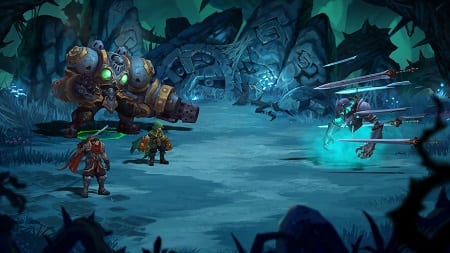 The Final Fantasy influence is unmistakable.

Created by first-time developer Airship Syndicate and published by THQ Nordic, Battle Chasers: Nightwar is the result of a successful Kickstarter campaign promising to pay homage to old-school RPGs while still offering up a fresh take. Does it succeed? Only one way to find out. To arms!

Combat is entirely turn based, so the only thing you’ll be controlling in there is wading through the menus and making selections. Each character’s options are divided into two sections: basic actions and more powerful abilities. The former occur immediately while the latter have a “casting” delay and cost SP.

It’s a pretty standard setup with a couple minor twists, most notably that standard actions will “overcharge” your SP meter, allowing you to build up a buffer so that the abilities don’t draw from your rather modest pool of SP. It’s an interesting idea, but in practice it makes it so you start most battles with weaker strikes to ensure you have SP for any unexpectedly tough fights.

What’s the problem with that? Time. Compared to other high-encounter games Nightwar moves at a slow pace. It didn’t bother us initially, but as the number of fights climbed so did the feeling that things weren’t happening quickly enough.

For example, a fight against three hopelessly overmatched foes requires multiple turns since any AoE or multi-target strikes require SP, which you’ll be wont to throw away in battles such as those.

It doesn’t help then that the game’s other two aspects, dungeon crawling and moving around a traditional overhead map, feel slow as well. It’s particularly noticeable as you advance and have to backtrack along the world map, which is sparsely populated with occasional loot caches and fights. It makes it feel like artificial length has been added.

Nightwar has a nice look, similar to something you’d see from Vanillaware. There’s plenty of detail with the characters and enemies during battles, though the latter are reused a bit too liberally, particularly the less interesting ones (like the slimes). Dungeon areas are reminiscent of any number of isometric action RPGs, a la Diablo or Torchlight.

Sound effects are strong, and the dialogue, while short on meaningful exchanges, is at least delivered effectively. The soundtrack stumbles, however, lacking the type of sweeping score that can really elevate these fantasy RPGs.

After being shot down over the ominously named Lost Continent, your band of RPG archetypes will explore the world built in the comic series Battle Chasers. We were wholly unfamiliar with the source material but had no trouble following a plotline rich in genre staples. It does eventually throw some curveballs, but the lack of character development is a missed opportunity.

Unlike many RPGs, we never formed much of a bond with our six-person crew, which is unfortunate as we would’ve enjoyed learning more about Garrison and Gully and getting more deeply invested in their quest. While that doesn’t wholly undermine the story, it does mean you’ll need to really buy into the gameplay to spend the 40 or so hours needed to complete the game.

As to that, there’s a clear old-school Final Fantasy vibe going on with the pure turn-based combat of yesteryear. It’s a style that always appealed to us, and it’s fairly well implemented here. You’ll have three members of your team active at once, though you can only switch members at designated points — a decision that feels both archaic and limiting. Still, it’s a diverse group and pretty much any combination seems viable.

When exploring, dungeon encounters will be triggered by contacting enemies, and though each character has an ability (e.g., a dash, group heal, etc.) that can be used from that screen, for the most part you’ll just walk around, loot barrels and chests, and take part in a dull fishing mini game. There’s no way to attack to gain initiative or catch an enemy unaware, which robs Nightwar of any strategic element these sections could’ve had.

Collecting and improving loot is a constant focus, and though the majority of it will come from defeated enemies or treasure chests, there’s also a crafting mechanic where you can build powerful versions of weapons and armour, provided you have the right blueprint and materials. The rate at which you find new gear is well metered, and we rarely found our characters forced to use dramatically lower-level stuff.

How much you enjoy Nightwar likely comes down to how much you enjoyed its influences because for better or worse there isn’t a ton of innovation here. If chasing loot, grinding out levels and dozens of hours of turn-based combat sound like a good time, this delivers. If any of those ideas come across as outdated or uninteresting, however, none of the game’s modest tweaks are like to change your outlook.

With its retro feel and steady core experience, Battle Chasers: Nightwar is a solid offering for dedicated fans of the genre.

By HC Green
Tags: Airship Syndicate, Battle Chasers: Nightwar, Final Fantasy, THQ Nordic, Video Game Review
This entry was posted on Monday, October 30th, 2017 at 9:10 pm and is filed under Herija Green, Video Game Reviews. You can follow any responses to this entry through the RSS 2.0 feed. Both comments and pings are currently closed.