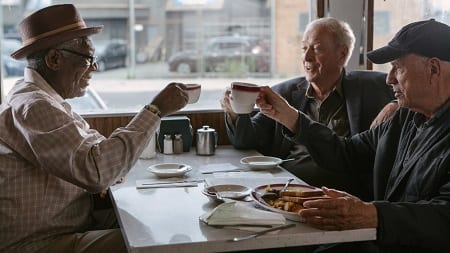 There’s no shortage of acting talent in Going in Style.

Going in Style is an updated version (pseudo remake) of a 1979 film that starred a pair of comedy legends, George Burns and Art Carney. This version, directed by Zach Braff, best known for his role on Scrubs, features a trio of respected performers, though of the three we’d only peg Alan Arkin as being typically associated with comedy.

He’s joined by the smooth vocal chords of Morgan Freeman and Michael Caine, who steps out of the mentor role he has been championing the last decade or so in the Batman films as well as Kingsman: The Secret Service. It’s a deep and talented cast, but that’s only one part of a successful movie.

Longtime friends Joe (Caine), Albert (Arkin) and Willie (Freeman) are trying to enjoy their golden years, but they suddenly find themselves in financial distress when the pension fund from their previous employer is eliminated after the company is sold. Minus that money, Joe, whose daughter and teenage granddaughter live with him, stands to lose his home to foreclosure.

When they learn that their bank is aiding in redirecting the pension fund to pay off company debt, Joe comes up with a radical idea: rob the bank, get their money back and give anything above what they feel they’re owed to charity. At first, Willie and Albert resist the idea, but they eventually relent when they see the downside as living their final days rent free and having meals/health care provided.

To that end, Joe gets an introduction to Jesus (John Ortiz; Braga from the Fast series) via his deadbeat former son-in-law. The three then begin planning for the heist with Jesus as their mentor in preparing them both physically and mentally for the task at hand. Now they just have to go through with it, and not get caught in the process.

There’s little you can take away from the respective résumés of the three principles. No, this isn’t the best work of their careers, but all three seem to be genuinely enjoying themselves as they glide through the movie. While there are few laugh-out-loud moments, Going in Style is better than similarly themed films like Last Vegas or The Bucket List (both of which also starred Freeman).

It certainly feels as though the film is skewed toward an older audience — and it’s worth noting that this is more about the relationships between the three men, each other and their families, than it is about the heist — but it adds some pluck through its upbeat soundtrack and a few enjoyable supporting roles. Most notably Ann-Margaret reprising her Grumpy Old Men love interest angle and Kenan Thompson as a grocery store manager.

For a comedy, Going in Style can be pretty depressing. The standard “look how bad growing old is” staples are all there from being served poor food, struggling to pay for basics and, of course, the obligatory “this is what we have to look forward to when we’re even older” guy played by Christopher Lloyd, who was already being cast as an old guy in 1985’s Back to the Future. Great Scott!

Going in Style‘s plot is predictable from start to finish and never deviates from the obvious path. That would’ve fared better had it gone a sillier route and stayed away from trying to add too many “serious” subplots, or, conversely, had they chosen to commit to a couple.

Instead, you get a weird mix of slapstick and somber. One minute Joe and Willie are trying to shoplift from a grocery store, including an escape on a motorized scooter, and the next we’re learning Willie needs to have a kidney transplant. The film tries to choose what the audience should take seriously, and it just doesn’t make for a cohesive final product.

Roughly 15 minutes of deleted scenes represents the entirety of the Blu-ray’s extras. With the feature only running about an hour and an half you might as well check out what didn’t make the cut, though outside of a funny scene where Jesus gives the guys burner phones it’s forgettable.

Predictable, inoffensive and eminently watchable, Going in Style is a fine way to spend 90 minutes with anyone that likes an easy plot to follow along with some tried-and-true comedy. Truthfully, however, you’ll probably forget most of it by the next day.

By HC Green
Tags: Alan Arkin, Art Carney, Blu-ray reviews, George Burns, Going in Style, Michael Caine, Morgan Freeman, Movie Review
This entry was posted on Friday, August 4th, 2017 at 12:19 pm and is filed under Herija Green, Movie Reviews. You can follow any responses to this entry through the RSS 2.0 feed. Both comments and pings are currently closed.