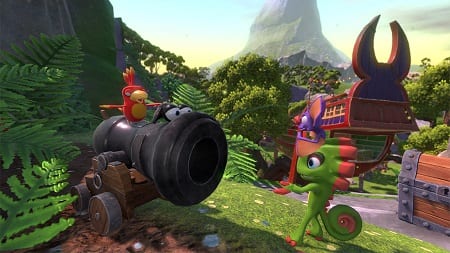 Yooka-Laylee is the much-hyped spiritual successor to games like Banjo-Kazooie. Kickstarted in 2015 by several ex-Rare employees under the new studio Playtonic Games, it’s here to reclaim the glory days and prove that the genre still has relevance.

The collect-a-thon platformer has often featured deceptively complex controls, with advanced mechanics requiring some tricky combinations of mechanics. Yooka-Laylee has largely maintained that balance of being very approachable to newcomers and younger players while also giving veterans of the genre some interesting tools to get to hard to reach places or speed up their game.

Some camera issues bring down the experience at times, particularly indoors or when it needs to be moved frequently, though those moments aren’t too prevalent.

Despite hearkening back to older times, Yooka-Laylee is a pretty fantastic looking game. In particular it shines at high resolutions on PC, but even most of the console versions should suffice, and being able to play in higher frame rates than those of the Nintendo 64 days is a nice change of pace for the genre. Still, some areas are a bit lifeless, especially in some of the later areas.

Grant Kirkhope scored this title, and he’s a real boon to the game’s soundtrack. It bounces among the various level themes, providing catchy tunes that fit a tropical or snowy area with ease.

Sound effects are solid and punchy, and their cartoonish flair offers a satisfying crunch to attacks. Each character doesn’t really speak as much as repeat a bunch of gibberish, which can get a little grating in some of the longer interactions between them.

The various pages from the duo’s book have been scattered though a variety of levels you’ll access through the villainous corporation’s headquarters. Most of these worlds will offer an initial challenge of four or five pages to collect, and the game largely allows you to move at your own pace.

You’ll need a few to unlock the next world, but you’re also offered additional ways to spend the items you collect. Instead of opening the third level, for instance, you can opt to expand a current level, which will have new areas and challenges to explore.

In addition to this player-controlled pacing, there’s a currency and unlock shop. While it can be fun to choose how you power up your characters, players can easily also find themselves working to unlock missions that will then send you back out to go buy some upgrade you’ll need. This can be pretty deflating as you either work to grind the currency out or move on to some other goal in the meantime.

Gameplay itself varies in quality. The first level or two are the highlights of the game, with the latter stages often indulging in some of the more annoying traits of the games it is emulating. Most of the bosses are pretty well designed, though a few, such as one involving a vehicle, can get pretty annoying. Still, there’s a lot of charm to be found among the rough edges.

Yooka-Laylee is a solid entry into the collect-a-thon platformer genre, though it is one that often struggles with balancing between appealing to nostalgia and appealing to modern sensibilities. It’s a noble first attempt, and hopefully Playtonic Games is around long enough to iron out the issues with a sequel.

By Brian Gunn
Tags: Banjo-Kazooie, Video Game Reviews, Yooka-Laylee
This entry was posted on Wednesday, June 7th, 2017 at 2:26 am and is filed under Brian Gunn, Video Game Reviews. You can follow any responses to this entry through the RSS 2.0 feed. Both comments and pings are currently closed.