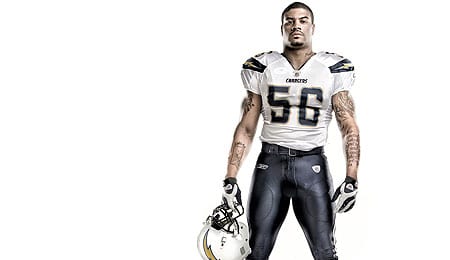 Shawne Merriman was lights out on the field and has kept up that pace since leaving the NFL. (Photo Courtesy of Anderson Group PR)

We recently sat down for a chat with Shawne Merriman, former San Diego Charger great, three-time Pro Bowler and an All-Pro linebacker. “Lights Out,” as he was dubbed, has done quite well for himself after football, creating his own clothing line, recently becoming the owner of a NASCAR vehicle and even toying with the idea of becoming a professional Bellator MMA fighter.

We had a great discussion, running the gamut from his latest ventures and future goals to his thoughts on Fantasy football and his favourite memories of his playing days.

Among the topics we covered with Shawne were:

To hear the interview in its entirety, simply click the link below. Presto!

Now it’s your turn. Let us know in the comments below what your favourite Shawne Merriman moment is.

By RotoRob
Tags: Shawne Merriman
This entry was posted on Thursday, June 8th, 2017 at 5:24 pm and is filed under FOOTBALL, Interview, MMA, NASCAR, RotoRob. You can follow any responses to this entry through the RSS 2.0 feed. Both comments and pings are currently closed.