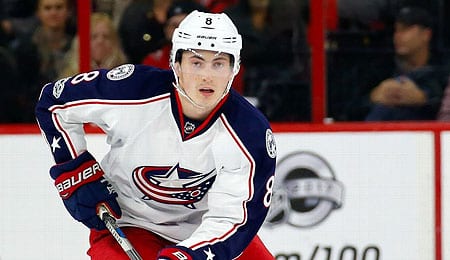 The 2016-17 Fantasy hockey season is now in the books and here’s hoping you had a great campaign and that our waiver wire picks played a role in that.

Oh sure, we had plenty of misses among our picks, and because of the weekly nature of our column it means that some hot free agents get scooped up days before we can tout them, but the fact is that if you managed to wound up with, say, two or three of these guys on your team, chances are you were a pretty happy camper this season.

Mikael Granlund, C/LW, Minnesota Wild (recommended in Week Six): After setting career highs in goals and points last season, Granlund obliterated all his personal bests this season en route to being named a finalist for the Lady Byng Award. His 69 points tied for the fourth highest total in Wild franchise history as the ninth overall pick from 2010 really came into his own. If you were astute enough to grab Granlund off the wire some time in the first month and a half of the season, you were incredibly well rewarded.

Zach Werenski, D, Columbus Blue Jackets (Week One): Werenski was averaging a point per game early on when we recommended him in the season debut of the Wire Troll. Those that took our advice enjoyed a phenomenal season from the rookie blueliner as he averaged nearly 21 minutes en route to scoring almost 50 points — 21 on the power play. The fact that Werenski was a finalist for the Calder Trophy in such a historic season for rookies speaks volumes about what kind of campaign he had. No defenseman was a better waiver wire claim. It’s just unfortunate for the Jackets that his injury (see video below) sealed their doom in the playoffs.

Anders Lee, C/LW, New York Islanders (Week Eight): Despite falling short of a playoff spot, the Isles managed five 20-goal scorers, paced by Lee’s career-best 34 tallies. Not bad for a dude sitting on most waiver wire for at least the first couple months of the season. Lee didn’t pick up as many assists on the power play, but he did average a minute of ice time more, taking full advantage of it with a rather unexpected breakout.

Nikolaj Ehlers, LW/RW, Winnipeg Jets (Week Three): We recommended Ehlers early on, and the Danish youngster sure proved us right by taking a massive step forward after his solid rookie effort in 2015-16. He amassed 25 goals while increasing his power play output. Winnipeg sure knows how use those first round picks, doesn’t it?

Nazem Kadri, C, Toronto Maple Leafs (Week Three): The Leafs’ belief in Kadri (signing him to a six-year deal last year) looked well-founded as he stayed healthy and broke through for a career season. He even showed an edge, racking up well over a penalty minute per game, while transitioning from a power play facilitator to finisher. Now just imagine if Kadri had gotten as much ice time as he had the previous season.

Jason Zucker, LW, Minnesota Wild (Week Two): We identified Zucker as a wire candidate very early in the season, and he paid massive dividends, putting together a career season and reaching 25 assists for the first time despite playing an undetermined portion of the season with a sports hernia that required surgery in early May. We like the fact that he also upped his penalty minute total. Now if he’d just get some regular PP time, we may seen an even bigger breakout from Zucker.

Michael Grabner, LW/RW, New York Rangers (Week Three): After pretty much falling off the Fantasy map in recent years, Grabner enjoyed a fine bounce back season, topping 25 goals and reaching 40 points for just the second time in his career. He’s never recorded many penalty minutes, but other than hoping to see him get more power play chances, it was a great recovery. Grabner kept the party going with another four goals in the playoffs as the Rangers flirted with a spot in the Eastern Conference Finals.

Nino Niederreiter, LW/RW, Minnesota Wild (Week Six): Remember how he flamed out with the Islanders because of issues with team management? Well, New York’s trash was Minnesota’s treasure as the durable Niederreiter enjoyed a career season, setting personal bests in goals, assists, points, penalty minutes, +/- and shots. The best part? At age 24, there could be upside yet, so a run at 30 goals next season doesn’t seem out of the question.

Now it’s your turn. Let us know in the comments below who your favourite Fantasy hockey waiver wire pick of the seasons were.

By RotoRob
Tags: NHL
This entry was posted on Monday, June 5th, 2017 at 12:38 pm and is filed under HOCKEY, RotoRob, The Wire Troll. You can follow any responses to this entry through the RSS 2.0 feed. Both comments and pings are currently closed.