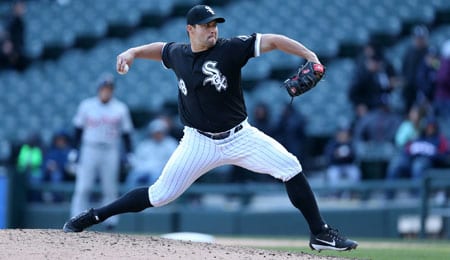 Tommy Kahnle has emerged as one of the top non-closing options. (Chris Sweda/Chicago Tribune)

Welcome back to another week of Fantasy baseball. June has arrived, so your race is now on in earnest. Work the wire!

This week, Jacoby Ellsbury — currently out with a concussion — has been shut down from any baseball activities because of headaches; Brandon Phillips apparently believes his No. 4 should have been taken out of circulation in Cincy; and Jorge Soler still can’t get a foothold in the bigs, farmed out by KC on Saturday.

Tommy Kahnle, RP, Chicago White Sox (ESPN: 6.2 per cent; CBS: 8 per cent): A couple of years ago, Kahnle got some Fantasy love from us when he briefly had a chance to close in Colorado before almost immediately working his way out of the role. Well, he’s really come into his own since putting on White Sox. Last year, Kahnle improved his walk rate (although it was still unacceptably high), but this year, he’s taken that to a whole new level, combining it with unhittable stuff to become a top setup option. If David Robertson gets dealt, Kahnle looks poised to close. Just don’t ask him to say anything intelligent in an interview (see video below).

Eric Young Jr., OF, Los Angeles Angels (ESPN: 1.7 per cent; CBS: 4 per cent): This journeyman is back in the bigs, earning the call for his fifth team thanks to Mike Trout going down. So far, Young has really taken advantage of his opportunity, hitting safely in four of five games, with three multi-hit efforts. He swiped two bags in his season debut, so hopefully the conservative Angels will keep letting him run, as that’s where his value lies.

Max Moroff, 2B, Pittsburgh Pirates (ESPN: unowned; CBS: unowned): Just recalled from Triple-A, Moroff is someone to track in deep single-league formats. He struck out in his only two plate appearances last year, but is getting a bit more of a look this season, coming through with his first career hit and ribbie. What intrigues us is how big a jump Moroff has taken at Triple-A this year, proving he deserves a longer audition in the bigs based on his excellent on-base skills.

Dylan Cozens, OF, Philadelphia Phillies (ESPN: unowned; CBS: 4 per cent): This is a forward-looking pick, as Cozens — already on the 40-man roster — should get a shot in Philadelphia by August. The Phillies’ minor league co-hitter of the month for May, he shook off a slow April by batting .330 with four doubles, three triples, nine dingers and 26 RBI last month. You may recall that Cozens bashed 40 homers at Double-A last year, and now, earning his first taste of Triple-A action, he’s not hitting as well, but as indicated, he’s heading in the right direction now. Another month or so of that kind of production will have him knocking on the door.

Ben Lively, SP, Philadelphia Phillies (ESPN: 0.7 per cent; CBS: 5 per cent): Lively sure looked sharp in his MLB debut Saturday, earning the win with seven innings of four-hit, one-run ball against the Giants. Think Lively will stick around? Well, the last time a Phillies’ starter earned a win was April 27, so, yes, we suspect he’s earned himself some rope with this performance.

Taylor Motter, 2B, Seattle Mariners (ESPN: 4.7 per cent; CBS: 14 per cent): Jean Segura (ankle) could be out two months, leaving Motter — who will likely soon qualify at SS — with a clear path to PT for the foreseeable future. Motter tends to tinker with his mechanics a lot, but he seems to have found something that works now, delivering an RBI single Tuesday, another hit on Thursday and then a grand salami with a walk and two runs on Friday. He offers some pop and a bit of speed, so if he can start hitting for a better average, he’ll be a nice asset for the next several weeks.

Magneuris Sierra, OF, St. Louis Cardinals (ESPN: 0.7 per cent; CBS: 3 per cent): Sierra is back with the Cards, and while he may not be there long (he’s taking the spot of Jedd Gyorko, currently on paternity leave), all he does is keep hitting. Sierra has hit safely in all eight games of his career, which ties the longest such streak by a Cardinal since 1900. Sierra definitely seems to be on the fast track, playing just 20 games in High-A before his promotion to Double-A (where he’s played all of 10 games) and then the majors. He could be a factor again before long.

Harrison Bader, OF, St. Louis Cardinals (ESPN: NA; CBS: 3 per cent): Bader is another Cardinal outfielder that’s putting himself in the picture with a more productive second season at Triple-A.

Jeff Hoffman, SP, Colorado Rockies (ESPN: 7.8 per cent; CBS: 19 per cent): Two Rockie starters? Hoffman was one of Colorado’s top prospects heading into the season for a reason and now that he’s scheduled to get another start on Sunday, it’s time to give him a look.

Eric Skoglund, SP, Kansas City Royals (ESPN: 11.6 per cent; CBS: 27 per cent): Skoglund gets his second start Sunday as KC seeks a sweep over Cleveland. In his debut, he shut down Detroit for 6 1/3 IP, giving up just two hits and a walk against five Ks. Impressive.

By RotoRob
Tags: Chicago White Sox, Tommy Kahnle
This entry was posted on Sunday, June 4th, 2017 at 5:54 pm and is filed under BASEBALL, RotoRob, The Wire Troll. You can follow any responses to this entry through the RSS 2.0 feed. Both comments and pings are currently closed.