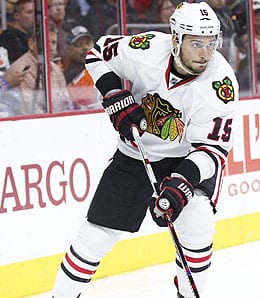 Welcome back to another wonderful year of the best show on ice — NHL hockey! It’s been an exciting year in the sport worldwide. Team Finland dominated the youth scene internationally, and its two brightest stars are already lighting up the NHL. The Boston Pride won the first ever Isobel Cup in the National Women’s Hockey League inaugural season; Team Canada cruised to victory at the World Cup of Hockey, while Team North America and Team Europe were the clear darlings of the event. Oh, and there’s top level professional puck being played in China now thanks to KHL expansion team Kunlun Red Star. There’s also talk a London franchise could be next. As we said, exciting times.

Speaking of exciting times, there doesn’t seem to be a day that goes by without one or two NHL rookies leaving their mark on the score sheet. With that in mind, at the end of every Wire Troll, we’ll include a “Rookie of the Week” segment. These are the future stars of your Fantasy league, so keep an eye on them, especially in keeper formats.

Let’s get to our five best waiver wire recommendations of Week One, shall we?

Artem Anisimov, C, Chicago Blackhawks (ESPN: 36.5 per cent; Yahoo: 27 per cent): Anisimov had one of the best jobs in the NHL last season as the pivot between the league’s highest scorer (Patrick Kane) and the eventual Rookie of the Year (Artemi Panarin). Anisimov has taken to it once again with two goals, six points, a plus-2 rating, eight penalty minutes, two power play points and 10 shots on goal. As you can see from the video below, he knows how to finish off his teammates’ superb setups, here scoring one of his two goals on Saturday.

Al Montoya, G, Montreal Canadiens (ESPN: 18.4 per cent; Yahoo: 23 per cent): While starter Carey Price was out to start the season, Habs fans could rest easy knowing they still had the best goalie in the league. In three appearances, Montoya has two wins, a 1.30 goals against average, a .962 save percentage and a shutout. He’ll receive fewer starts with the return of Price, but you might want to add Montoya to your bench as he’ll do in a pinch.

Zach Werenski, D, Columbus Blue Jackets (ESPN: 25.1 per cent; Yahoo: 31 per cent): One of a few defensemen currently scoring at above a point-per-game pace, the former Michigan Wolverine is everything Columbus hoped for when it picked him on draft day. In three games, Werenski has two goals, four points, a minus-1 rating, three power play points, 14 shots on goal and four defensive points, depending on Fantasy formats. He’s doing all this while skating an average ice-time of 22:12 per game, too. Impressive.

Darren Helm, C, Detroit Red Wings (ESPN: 14.3 per cent; Yahoo: 6 per cent): Detroit’s offense seems to be firing on all cylinders to start the season. Offseason signee Thomas Vanek has played a big role, but so has longtime Wing Helm. Helm has accumulated four goals, five points, a plus-5 rating, two power play points, a game winning goal and 10 shots on net in five contests.

There are so many names to consider here, it’s far from funny. Auston Matthews, Patrik Laine, Jesse Puljujarvi, Mitch Marner, William Nylander, Matthew Tkachuk and others all made their mark in the opening week, but it’s Matthews who takes the cake. Why? Well, an unprecedented four goals in his NHL debut will certainly make him an early frontrunner. The 2016 first overall pick added another goal and an assist for a total of five goals, six points, a plus-1 rating, two power play points and 18 shots on goal to open his career with the Maple Leafs.

By Dakota Case
Tags: Artem Anisimov, Zach Werenski
This entry was posted on Sunday, October 23rd, 2016 at 5:28 pm and is filed under Dakota Case, HOCKEY, The Wire Troll. You can follow any responses to this entry through the RSS 2.0 feed. Both comments and pings are currently closed.