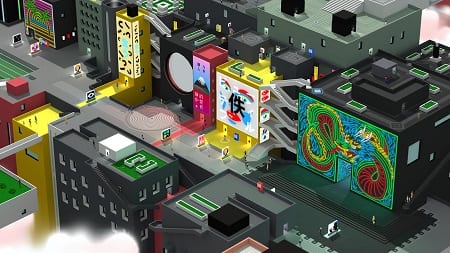 As of a couple weeks ago we’d never heard of Tokyo 42, but after catching a glimpse of its eye-popping trailer on YouTube we knew we had to try it — and after spending many hours exploring its stylized world, we’re glad we did. Mostly…

There are some significant problems in how Tokyo 42 plays, but only in certain scenarios. For large sections of the game you’ll have the option to move methodically, killing from the shadows and plotting out your next move(s). These handle beautifully, and the thrill of clearing out a stronghold teeming with guards using only a sword is palpable.

Unfortunately, the same cannot be said when the bullets start flying hot and heavy. It’s here that the game’s targeting betrays you, usually by virtue of not properly firing at the right height — in other words, bullets that should hit end up sailing harmlessly over your enemies’ heads. Doubling down on the issue, it also seems like projectiles that should miss you find their mark.

It’s frustrating because it seems like those moments are built for tight twin-stick shooter mechanics, but they never feel that way, even when everyone is on level ground. Aiming at distance requires you to click the right stick, which makes your character stop and exposes you completely. Also, activities like sniping are undercut by enemies that react while the first bullet is still in flight.

Despite those struggles, we were eventually able to tackle the action sequences. The parkour and bike riding, however, we found exponentially more difficult. It’s worse on the bike, which just doesn’t handle well at all, but both methods of fast travel require constant adjusting of the game’s camera by cycling through eight 45-degree increments.

It’s not just awkward on the controller, either. It’s also awkward to adjust what you’re doing on the fly in your mind as changing the camera’s viewpoint requires you to change the directional input as well. We’re sure there are people out there that’ll adjust better than we did, but it’s hard to imagine control difficulty won’t be atop everyone’s list of issues with the game.

Unquestionably it was Tokyo 42‘s gorgeous cityscape that brought us in. The slick neon-infused Tokyo of the future, all done in crisp, clean lines and a dizzying array of colours is a sight to behold. It’s not hard to see Blade Runner‘s influence (right down to your overcoat), and it’s such an inviting creation that you’re likely to spend plenty of time idly rotating the camera to check everything out.

There’s a price to be paid for all wonderful architecture, though, and it comes in the form of said camera rotation. The Fez-like mechanic requires you to spin things at set angles, and at times it can make finding a path more difficult than it should be, along with the aforementioned problems in rapid movement that stem from the need to constantly shift perspective.

Tokyo 42 brings the heat on the soundtrack front as well, pumping out frantic up-tempo synth and mixing it with plenty of mellow tunes. There is a number of highlights from Beat Vince, and his efforts keep the game’s presentation at the highest level. It’s so good.

Framed for a murder you didn’t commit, your only recourse is to clear your name by going out and actually killing people until you can draw out the assassin that framed you. Don’t overthink it. The story is played for yucks with its black humour, and, as luck would have it, nobody actually dies anyway since the ubiquitous “Nano-meds” bring everybody back to life (moral crisis averted, yay!).

Tokyo 42 tells its story, such as it is, through a series of primary and side missions. Successfully complete one and you’ll earn money and/or reputation points, which serve as a gatekeeper to progression by keeping areas and missions off limits until you acquire enough of a rep. This ensures that you’ll take on at least some of the secondary activities rather than blitz through the game.

There’s some GTA vibes to be found here, though the cops only seem to show up if you kill a bunch of civilians — an activity for which there’s no reward. Roving gangs of baddies don’t actively engage, either, leaving the randomly deployed Nemesis as the lone hunter. It’s a fine concept, but the Nemesis tends to show up at the worst times and kill you in the cheapest ways (e.g., off-screen explosives).

As noted, stealth will be your best friend for much of Tokyo 42, and the stealth interface, while highly simplistic (guards won’t notice dead bodies right next to them) is consistent and reasonable for what the game asks of you. Should you be spotted, you can actually change your appearance on the fly provided you have your battery charged.

Beyond the missions, you’ll have the opportunity to track down a number of collectibles, clear out guard outposts and look for strange events happening in the city. It’s a fun little incentive to stumble around the city, which is one of the game’s highlights.

While most of these activities and missions are fun to accomplish, the spectre of shaky controls hangs over everything, and there are sure to be times when all of the available tasks require you to fight those controls to advance to something better. We were guilty of a few rage quits as a result, but the good news is you only have to finish any given mission once, and none of them are that long.

It’s worth noting that there is also a multiplayer component for anyone looking to match combat skills online. It’s decent fun but offers just five maps and doesn’t feel tailored for long-term use.

When Tokyo 42 keeps to the shadows it’s a great experience elevated by a tremendous presentation, but its imprecise shooting and rapid movement elements drag things down.

By HC Green
Tags: Tokyo 42, Video Game Review
This entry was posted on Monday, June 5th, 2017 at 9:20 pm and is filed under Herija Green, Video Game Reviews. You can follow any responses to this entry through the RSS 2.0 feed. You can skip to the end and leave a response. Pinging is currently not allowed.