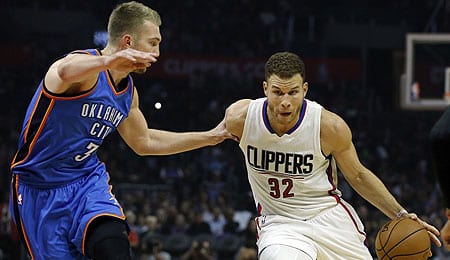 Domantas Sabonis (left) is being asked to guard some tough players. (AP/Scanpix nuotr.)

Welcome back to another week of Fantasy hoops. Adrian is under the weather this week, so RotoRob is handling the writing, with some suggestions from Mr. Wallace. We’re just three weeks away from the All-Star break, so buckle up and make a run in the standings right now, peeps.

This week, the Carmelo Anthony trade talks are heating up with word that the Clippers are trying to add a third team to make a deal work; Jimmy Butler was forced to come off the bench on Friday as a disciplinary move, but it didn’t exactly spark him as he couldn’t drop a pea in the ocean; and C.J. McCollum and Chandler Parsons got into a Twitter war.

Wayne Ellington, SG, Miami Heat (ESPN: 5.6 per cent; CBS: 10 per cent): Okay, so his shooting hasn’t exactly been bang on lately, but it’s hard to find much fault in Ellington’s game right now as he’s been piling up the treys and points and even pitching in with some boards and dimes. Of course, on the defensive end (as you can see in the Tweet below), things have been a different story…

Jameer Nelson, PG, Denver Nuggets (ESPN: 10.1 per cent; CBS: 19 per cent): Is it really 13 years since the Nuggets took Nelson 20th overall in the draft? This little guard sure has put together a pretty impressive NBA career, closing in on 800 games while averaging nearly 12 points and over five dimes. Nelson has been healthy this season, and he’s been getting another chance to start lately with rookie Emmanuel Mudiay (back) out of the lineup. Nelson’s shooting touch has been off the charts lately (12-for-19, including 4-for-8 from downtown, in the last two games) and he’s been racking up the assists lately, making him a must-add for those seeking short term help in those areas.

Domantas Sabonis, PF, Oklahoma City Thunder (ESPN: 2.3 per cent; CBS: 22 per cent): The son of the great Arvydas is making a name for himsef as a rookie for the Thunder. Selected for the World Team at the Rising Stars Challenge, Sabonis is starting to show why he was taken 11th overall in last year’s draft. And now that Enes Kanter (broken hand) is out, Sabonis has a chance to keep seeing enough minutes to be Fantasy worthy. Sabonis has flirted with double-doubles in each of the last two games, and he’s starting to show the shooting touch that made him such a stud at Gonzaga.

C.J. Miles, SF, Indiana Pacers (ESPN: 8.1 per cent; CBS: 24 per cent): We talked about Miles’ coming out party early this season, but he cooled in December and hasn’t seen quite as much action so far this month. However, that’s changed in the last week as he’s seen at least 28 MPG over the last four, responding with tons of treys, a couple of nice scoring games and even a decent rebounding game (six on Thursday). Miles has been fairly healthy so far this season, and if that continues, he’ll be a solid bench option for all formats going forward.

Ivica Zubac, Los Angeles Lakers (ESPN: 4.4 per cent; CBS: 27 per cent): This 19-year-old rookie has thrust himself into the limelight suddenly, showing tremendous pick-and-roll skills and a much-better shooting touch in recent games. With back-to-back double-doubles (and three over the last five games), plus excellent FT shooting for a young big man, Zubac is proving worthy of Fantasy consideration.

Kosta Koufos, Sacramento Kings (ESPN: 1.6 per cent; CBS: 8 per cent): Koufos is seemingly always a centre just outside the Fantasy circle, one you can reach for every now and then to get you through a tough time. He’s seeing more PT this season, but still not enough to rely on consistently, yet every now and then — like Friday — he’ll tease us with a near double-double. So for now, consider him an option in very deep formats only.

By RotoRob
Tags: Domantas Sabonis, Oklahoma City Thunder
This entry was posted on Saturday, January 28th, 2017 at 4:29 pm and is filed under BASKETBALL, RotoRob, The Wire Troll. You can follow any responses to this entry through the RSS 2.0 feed. Both comments and pings are currently closed.