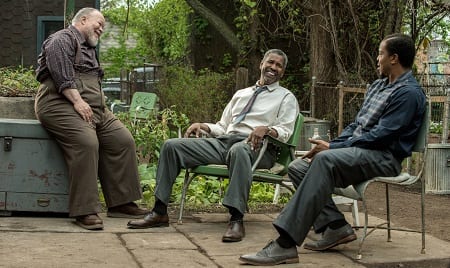 Based on a 1985 play of the same name by August Wilson, Fences was brought from Broadway to the big screen last year courtesy of director-star Denzel Washington. It reunited the Academy Award winning actor with Viola Davis, Mykelti Williamson, Stephen Henderson and more reprising their roles from the Broadway production several years prior.

Set in Pittsburgh’s Hill District in the 1950s, Fences centres around the life of Troy Maxson (Washington), a one-time baseball star in the Negro Leagues that now works as a waste collector with his friend Bono (Henderson). Maxson is married to Rose (Davis) and has two children by two different women: Lyons (Russell Hornsby) and Cory.

Nearly two decades into his marriage to Rose, Troy is having trouble accepting his lot in life. He feels he should be a driver on the collections route and that he was blackballed from major-league baseball and even at his age could still outperform most white players. These feelings jade his view of Cory, who is a talented football player that’s being recruited to play college ball.

Troy’s commitment to his marriage has also started to wane, and after a discussion with Bono he reveals to Rose not only has he had an affair but also that the other woman is pregnant with Troy’s third child. This news drives a wedge between the couple as well as between Troy and Cory. Now the question becomes how to navigate these troubled waters.

Washington and Davis are exceptional in their roles. It’s no surprise given their pedigree, but the fact that they played these characters so many times on Broadway certainly helped them flesh out the tiniest details. Washington was nominated for an Academy Award for Best Actor, and Davis took home the Oscar for Supporting Actress. This hardware was well deserved.

It’s an interesting story, and its roots as a play help keep it very intimate. There is only a handful of actors in the film, and as such it offers a very focused narrative that’s easy to follow. Most of the film takes place in the Maxson house or the backyard, allowing the actors to carry the weight with their performances, which, as noted, are top notch.

Although Fences shows a very limited piece of Pittsburgh, what’s recreated is well done and helps you get immersed in the time period — it doesn’t feel like there are a lot of movies set in the ’50s. We do wish the world would’ve been expanded a bit more, though, as the film seems determined to keep the whole thing as “stage-like” as possible.

While it may be admirable to make the stage-to-screen transfer as faithfully as possible, it also ignores the differences in mediums. This is noticeable in the length of the film (more than two hours) versus the limited scope of the locations. It’s like they opened it up a little so you can see the surrounding world, but they bypassed chances to take advantage of the move.

On stage, it makes sense that we’d never meet Alberta (Troy’s mistress and mother of his third child), but in a movie setting it’s a little odd to have someone be so central to the conflict yet never appear. For better or worse, a lot of things are left to the imagination.

There are five featurettes on offer, the longest being a discussion about the challenges of moving something from stage to screen. Others cover the cast, Denzel’s dual role as actor and director, and a focus on Rose’s character and the work Davis did with it. Perhaps the most interesting is the seven-minute look at the Hill District of Pittsburgh.

If you enjoy intense, powerfully acted drama, Fences is your movie. It’s riveting and moving, even if too much is left unseen.

By HC Green
Tags: August Wilson, Blu-ray reviews, Denzel Washington, Fences, Movie Review, Viola Davis
This entry was posted on Friday, March 10th, 2017 at 9:44 pm and is filed under Herija Green, Movie Reviews. You can follow any responses to this entry through the RSS 2.0 feed. Both comments and pings are currently closed.