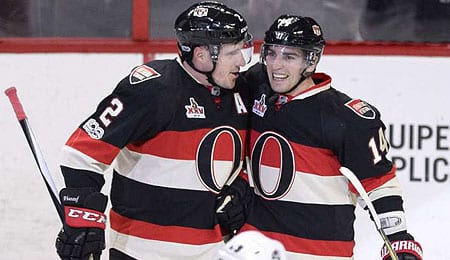 Welcome back to another week of Fantasy hockey as we enter the season’s final stretch. Keep plugging away for that Fantasy championship, peeps!

This week, Columbus has lost Ryan Murray for 4-to-6 weeks with a busted hand, so go ahead and cut him in all formats; Washington’s Kevin Shattenkirk earned a two-game suspension for doing his rhino imitation on Kevin Gravel; and the Rangers will be without Henrik Lundqvist for 2-to-3 weeks because of the dreaded lower-body injury.

By the way, Mathieu Perreault’s ownership has risen significantly since we recommended him in late-February, but he continues to rock, and need to be added.

Without further ado, here are some players to consider for your Fantasy hockey team…

Alex Burrows, LW, Ottawa Senators (ESPN: 10.7 per cent; CBS: 17 per cent): Acquired at the trade deadline by Vancouver, Burrows has started to produce. A fourth liner who averages between 12 and 14 minutes, he lit the lamp twice and was a +2 in his Senators debut (see video below), a victory over Colorado. Then, two games later, Burrows picked up a goal and an assist, and was again a +2 in a win over Boston. Finally, on Saturday he picked up another goal and an assist in Colorado, as the Senators won their sixth straight. Burrows has 12 goals on the season and averages about two shots, but we would not expect him to play any more than 15 minutes per game.

Jonathan Bernier, G, Anaheim Ducks (ESPN: 17.4 per cent; CBS: 29 per cent): Pressed into the starting goaltender situation because of an injury to John Gibson, Bernier has shone for Anaheim. In the last four games, Bernier is 3-1, and has been one of the reasons why the Ducks have surged lately in the Pacific Division. His standout performance came on the road in Chicago, where made 43 saves for the shutout.

Cody Ceci, D, Ottawa Senators (ESPN: 5.2 per cent; CBS: 15 per cent): In the last five games, Ceci has a goal and three assists. His recent highlight came against Dallas, as he scored a goal, recorded an assist, and was a +2. Ceci is not a +/- asset, but depending on the game he will average between 21 and 27 minutes.

Jaccob Slavin, D, Carolina Hurricanes (ESPN: 14.2 per cent; CBS: 25 per cent): Slavin has been Carolina’s best player on the back end, and lately has been providing a scoring punch. He recorded an assist in five consecutive games, and was a +5 over that stretch. Slavin has scored 24 points and is a +15 for the season, but being on the Hurricanes’ top defensive line, he averages about 25 minutes and with this much ice time, he does play on both the power play and the penalty kill, so nearly one-third of his points (four on PP; three on PK) have been on special teams.

Nick Bonino, C, Pittsburgh Penguins (ESPN: 14.5 per cent; CBS: 21 per cent): A solid two-way player, Bonino is averaging nearly a point per game so far in March, including an impressive four goals in seven games (all of which have come over the last four games). The veteran knows how to draw penalties as well, not that this would be a factor in his Fantasy value (although it’s appreciated by his real world coach, which translates into more confidence and extra minutes).

By David Weightman
Tags: Alex Burrows
This entry was posted on Tuesday, March 14th, 2017 at 2:43 pm and is filed under David Weightman, HOCKEY, The Wire Troll. You can follow any responses to this entry through the RSS 2.0 feed. Both comments and pings are currently closed.