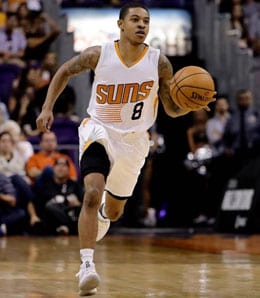 Welcome back to another week of Fantasy basketball action. Well, it seems Michael Carter-Williams can’t catch a break. We recommended him at the end of the year; in fact, he headlined our final Troll of 2016. But for the past week, he’s been dealing with a knee injury, hurting his chances of gaining traction in the Bulls’ PG position battle. If you’ve been holding MCW in a deep league, it’s likely time to cut bait. Try investing in Cory Joseph (who we recommended last week) instead.

This week, Lakers co-owner Jeanie Buss had to cut her own brothers off at the pass as they attempted to oust her of controlling interest in the team; Matt Barnes’ lawyer had his client’s assault trial moved to after the NBA Finals, further proof that there’s a different set of rules for athletes than regular peeps; and Atlanta is expected to sign Jose Calderon this weekend.

And now let’s get to this week’s Fantasy basketball waiver wire picks, with a decidedly Phoenix flair in this edition…

Tyler Ulis, PG, Phoenix Suns (ESPN: 0.7 per cent; CBS: 5 per cent): This little rookie guard out of Kentucky — after slipping in the draft because of concerns over his hip and size — is starting to show he can play in the NBA. Ulis is suddenly an honourable member of The Thievery Corporation, with six steals over his last three games, dropping at least seven dimes in each of those games. He added a career-high 14 points and four boards on Friday despite seeing only 21 minutes of court time. Looking for a deep league sleeper? Here’s your man, as it’s clear Ulis is going to see way more action down the stretch. And hey, apparently his defensive skills are mock worthy, as you can see in the video below.

Alex Abrines, SG, Oklahoma City Thunder (ESPN: 2.2 per cent; CBS: 2 per cent): With Victor Olapido (back) out, Abrines has been starting and — generally — producing. On Friday, Abrines enjoyed a fourth double-digit scoring effort in five games, shooting very well over the last three contests specifically. He’s been filling it up from downtown, which is good, because he doesn’t really offer much in the way of peripheral stats, so he’s all about scoring and treys. If you need temporary help in that regard, give Abrines a look.

Alan Williams, PF/C, Phoenix Suns (ESPN: 12.5 per cent; CBS: 36 per cent): Youth is definitely being served in Phoenix, and Williams is just one of many players taking advantage of his newfound larger role, putting up big double-doubles in three of the last four games. Twice over that stretch he’s seen 30 or more minutes of action as the Suns look to develop their young players down the stretch. Williams is now anchoring the team’s second unit both offensively and defensively and has suddenly emerged as Phoenix’s sixth man, capable of doing shit like this.

Lance Thomas, SF, New York Knicks (ESPN: 1.4 per cent; CBS: 2 per cent): Getting a chance to start with Willy Hernangomez (ankle) out, Thomas went off for a season-high 21 points on Friday, adding seven boards, three treys and two steals. Thomas’ shooting touch has been off the charts over the last three games (15-for-25) and he’s been putting up solid rebounding numbers with some thefts. It will be interesting to see what kind of minutes he receives when the Knicks return to full strength, but he’s earned a look on your deep Fantasy squad.

Channing Frye, C/PF, Cleveland Cavaliers (ESPN: 7.8 per cent; CBS: 39 per cent): With Kevin Love out, Frye has been starting and while he’s not always getting enough minutes to produce, he’s been generally useful — even pitching in with some blocks occasionally. On Friday, Frye saw a decent amount of action (25 minutes) — enough time for a serviceable line (11 points, three treys, four boards, one block, one assist). Love is probably out until late-March, so Frye should get a chance to help space the floor for the Cavs for another three-plus weeks, so give him a look if you need a big that can give you treys.

Cody Zeller, C/PF, Charlotte Hornets (ESPN: 18.6 per cent; CBS: 50 per cent): Zeller returned this week from a quad injury, and has looked good as he starts to see more PT, flirting with low-end double-doubles in each game back. He shoots a high percentage from the field, and was really starting to see bigger minutes before he got hurt, so it’s definitely worth monitoring his situation as he shakes off the rust. And now with Frank Kaminsky (shoulder) going down, Zeller will shift right back into the starting lineup and have a chance to provide some serious value.

By RotoRob
Tags: Alan Williams, Chicago Bulls, fantasy basketball, Michael Carter-Williams, Phoenix Suns, Tyler Ulis
This entry was posted on Sunday, March 5th, 2017 at 12:34 pm and is filed under BASKETBALL, RotoRob, The Wire Troll. You can follow any responses to this entry through the RSS 2.0 feed. Both comments and pings are currently closed.