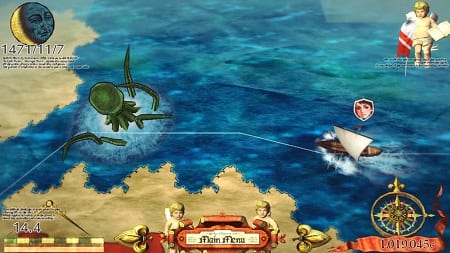 In the mid-15th century, European knowledge of the outside world was rather limited. Once long-range ships were invented, the oceans opened up the entire world to trade and exploration. In Neo Atlas 1469 you’ll set sail on the high seas to discover new lands, manage your trade empire, and battle fearsome pirates and monsters along the way.

Neo Atlas‘ controls work well enough. Players use the mouse or WASD keys to scroll around the world map and use the mouse wheel to zoom in and out. It’s simple and intuitive, but it’s not always the most efficient way of going from one location to another.

Unfortunately, presentation is the weakest aspect of the game. Instead of looking like a modern title, Neo Atlas appears more like a great looking ’90s PC title. The opening cinematic would’ve looked good about 17 years ago, but now it looks dated. Plus, the omnipresent cherubs and man in the moon fall deep within the uncanny valley. Ship and monster models that appear on the main map are simplistic but not unsightly.

Dated midi files comprise the entirety of Neo Atlas‘ soundtrack. Now that gamers have been spoiled with top-level live performances as our acoustic backdrop, it’s difficult to go back to inorganic computer-generated sounds. However, the sound quality could’ve been forgiven if the compositions were more engaging.

To finance your adventures, players assume a role as the head of a massive trading company. It’s up to you to decide which trade opportunities will be most profitable, taking into consideration that some enterprises often make up for their lower profits by creating new goods, which can then be traded again.

For instance, London has an established barrel manufacturing tradition, while Lisbon grows grapes. If you establish a trade route between the two cities, both will be rewarded with a more lucrative product: wine. There are all sorts of interesting products ripe for the taking, so don’t be afraid to get creative.

Since the player is the manager of the trading company, the actual exploring is left to your admirals, each of which has different attributes. Among your crew is the legendary Admiral Gomez, who has many years of seafaring experience under his belt, and the daring but naive Admiral Almeida, who specializes in scavenging sunken wrecks.

Understanding your admiral’s strengths and weaknesses is critical to success. Admiral Almeida’s charisma is likely to get her an audience with any locals, but her lack of combat savvy will likely lead to defeat in battle.

On the other hand, someone like Admiral Baldi, who is a fearsome warrior, will likely be shunned by locals due to his gruff personality. Neo Atlas glosses over what really happened when European explorers met foreigners, which may or may not be a good thing.

That information we explained to you in two paragraphs is roughly the same as what’s presented in the tutorial over the course of about an hour. If you’ve never played the game before, using the tutorial is necessary, but the pacing is so slow that it will wear anyone’s patience thin after only a few minutes.

The main culprit is Miguel, the player’s cartoonish assistant. Most of his attempts at comic relief are unsuccessful and his advice unnecessary. That being said, Miguel isn’t the only issue with the storytelling. Neo Atlas‘ biggest problem is its slow pacing, which can be attributed to the unfocused writing and flawed gameplay mechanics.

Let’s dive into the exploration mechanics. Players must select an admiral to command the fleet and purchase a ship to sail. After that, a course must be set. Be aware that admirals will follow the route exactly, meaning if you run into land, they will turn back instead of finding a way around.

After their return, more of the map will be revealed, but that doesn’t mean that the world is exactly as it appears. Players will be asked to approve or disapprove of any new maps, meaning should the player disapprove, the map will turn out differently than previously expected.

Islands can transform into continents or disappear entirely, or a bay can turn into a strait. Our very first disapproval lead to a small island becoming transformed into the mythical continent of Atlantis, so don’t be afraid to contradict your admirals’ reports.

The seas are full of dangers, ranging from storms to pirates, and even some monsters. Each poses a real threat to your fleet if encountered, so it’s best prepare for the worst. There are many different ships to command, each with different stats, but gaining the specs to build new ships is an arduous process.

Instead of having some kind of research mechanic, players must scour the map in search of shipbuilding manuals. These, along with other kinds of treasure, are only visible at extremely close magnifications, meaning that if the player isn’t zoomed all the way in, the game won’t give the player any indication that a valuable item is nearby.

This is very frustrating, as the map is huge and appears to be barren from distant magnifications. Dowsing can be helpful, but it has very limited usage and the replenishing price is exorbitant.

Also, there are krakens. So. Many. Krakens. They force your fleet to immediately return to port, thus limiting the distance you travel. If you don’t have enough firepower to defeat them, an issue we discussed earlier, turning back is the only way to avoid annihilation.

This sounds scary, but in reality, krakens are just invisible walls that move aimlessly around the ocean tacking on many unnecessary hours of playtime. They’re a disappointing inclusion.

Neo Atlas 1469 has a lot of potential. Getting to explore the world and reshape the map is undeniably fun, but it gets bogged down by kraken-induced slow pacing and scouring the map for tiny treasures.