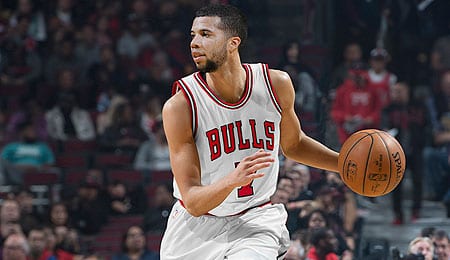 This week, Austin Rivers and Coach Doc Rivers both got tossed from a game for contesting a controversial ref call (like Father, like son?); LeBron James turned 32 and was sung ‘Happy Birthday’ over the PA intercom by rookie Kay Felder (great way to earn some extra PT); and Isaiah Thomas set a new career-high with 52 points, in the process piling up the most points in a quarter in Celtic history.

This marks the last Wire Troll for 2016 as we hope it has helped you and your teams to winning positions as we prepare for the second half of the season.

Michael Carter-Williams, PG, Chicago Bulls (ESPN: 10.5 per cent; CBS: 30 per cent): Don’t look now, but Rajon Rondo seems to be wearing out his welcome in Chicago, taking a seat on the pine for the second half on Friday. Enter MCW, who took the extra PT and flirted with a double-double. He had missed a couple of months with knee and wrist woes, just returning Monday. But now that the Bulls have options at PG, could Carter-Williams ascend to the starting gig? It’s definitely worth picking him up to find out how this will play out, especially if MCW can match Rondo’s range (see video below).

Terrence Ross, SG/SF, Toronto Raptors (ESPN: 4.9 per cent; CBS: 12 per cent): Ross tends to periodically tease Fantasy owners with his talent and he’s on one of those streaks now, having seen a big uptick in action over the last two games. And what’s up with 10 steals over his past three games? Holy Thievery Corporation, Batman! Ross has been used exclusively off the pine this season, which makes owning him a crap shoot from game to game, but he has never shot it better (46.5 per cent from the field; almost 41 per cent from downtown), and he’s doing his best work at the line as well. Still, the fact that his MPG has dropped three straight seasons does not bode well for a young player trying to earn his stripes in the NBA.

Montrezl Harrell, PF, Houston Rockets (ESPN: 12 per cent; CBS: 50 per cent): Harrell “rocketed” off the bench for 29 points, three rebounds, three assists, a steal and a block in a 20-point win over the Clippers Friday. This made a strong case for an upcoming starting role in place of teammate Clint Capela, currently out with a leg injury. Look at Harrell if you need a temporary offensive outburst at forward.

Dragan Bender, PF, Phoenix Suns (ESPN: 1.3 per cent; CBS: 16 per cent): Bender went off for 11 points, 13 rebounds, three steals, two assists and two blocks across 27 minutes in a loss Monday. The rookie had a tough performance to follow but this glimpse of potential is the true win here. Pick up Dragan if you’re in a deeper format and looking to “bend” the scoreboard a bit.

Nene Hilario, Houston Rockets (ESPN: 2.8 per cent; CBS: 8 per cent): Nene hasn’t had a performance for the books yet since stepping in for teammate Capela, but he has clinched the starting role so has the potential to make a difference on your deep league rosters. With Capela still out, the Nene only has two things in his way — teammate Harrell (see above) and himself.

Andrew Bogut, Dallas Mavericks (ESPN: 19.1 per cent; CBS: 44 per cent): Bogut may be on a restricted minute count and occasionally resting, but it could just mean “veteran preservation” for a bigger role to come. At worst he’s still a block specialist, and may be worth keeping stashed on the bench.

By Adrian Wallace
Tags: Austin Rivers, Chicago Bulls, Michael Carter-Williams
This entry was posted on Saturday, December 31st, 2016 at 2:14 pm and is filed under Adrian Wallace, BASKETBALL, The Wire Troll. You can follow any responses to this entry through the RSS 2.0 feed. Both comments and pings are currently closed.