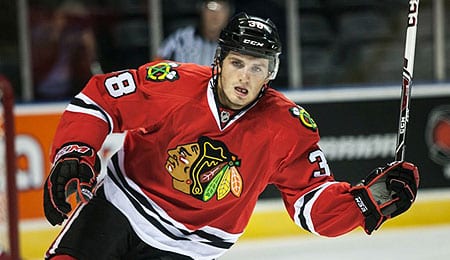 Ryan Hartman has made some nice contributions to the Hawks this season. (Mark Spowart/Icon Sportswire)

Welcome back to another week of Fantasy hockey. Well, with the trade deadline now behind us, we are squarely into the home stretch of the NHL schedule. It’s time to strap yourself and shake the wire for any possible last-minute help.

This week, Boston defenceman Adam McQuaid dodged serious injury after his neck was sliced with a skate; Buffalo has lost its leading scorer, Kyle Okposo, for the next couple of games thanks to a rib injury; and Antoine Vermette has opted to not appeal his 10-game suspension.

And now, here are some players to consider snatching off your Fantasy hockey waiver wire…

Travis Zajac, C, New Jersey Devils (ESPN: 35.2 per cent; CBS: 31 per cent): The former first round pick has been a force over the last month, putting up points in six of his last eight games. Some of the highlights include a short-handed goal and two assists combined in a back-to-back against the Islanders. Zajac also enjoyed a power play goal in the following game against Ottawa, a two-assist effort versus the Rangers, and finally a power play goal and an assist against Montreal. It doesn’t matter what the situation on the ice has been, Zajac can be counted on for the power play, even strength and shorthanded, and it shows with ice time as he averages between 21-22 minutes.

Ryan Hartman, LW, Chicago Blackhawks (ESPN: 8.7 per cent; CBS: 22 per cent): In his first full season with Chicago, Hartman has been a good contributor. In the last five games, he has recorded a +4 and had some key plays during the stretch, including a goal on the road against Buffalo and a goal and an assist at home against Arizona. He usually plays on the third line, and that explains why he averages about 12 minutes, although from time to time he will average as much as 15 minutes and when Nick Schmaltz missed some games last week, it was Hartman who shifted to the top line. Hartman is a gritty winger (although capable of showing some mad skills — see video below), who will put 2 or 3 pucks on goal per game, and could be counted on more by Coach Joel Quennville going forward.

Jake Guentzel, C, Pittsburgh Penguins (ESPN: 9.3 per cent; CBS: 22 per cent): Guentzel has only played about 25 games, but lately he has made some noise for the defending champions. His latest accomplishment was a week ago, in which he picked up two assists in the Stadium Series victory against Philadelphia. Guentzel followed that up in the next game with a goal in Dallas. He averages about 15 minutes, and it should only increase, especially with the departure of forward Eric Fehr to Toronto.

Martin Hanzal, C, Minnesota Wild (ESPN: 29.3 per cent; CBS: 29 per cent): Acquired at the deadline from the Coyotes, Hanzal helped out Minnesota already with a two-assist game against Winnipeg. He’s coming off a great February, in which he scored six goals, and while he can be very streaky, we expect him to get more ice time with the Wild which should lead to more production.

David Savard, D, Columbus Blue Jackets (ESPN: 15.2 per cent; CBS: 28 per cent): In the last four games, Savard is a +9, and was highlighted in a home game against Islanders in which he scored a goal and two assists, and was a +5. The youngster is on the top defensive pairing and for the season he is a +23.

Ron Hainsey, D, Pittsburgh Penguins (ESPN: 2.7 per cent; CBS: 7 per cent): Acquired at the trade deadline from the Carolina Hurricanes, the veteran has only played three games, but has registered an assist already. Expect Hainsey’s +/- to start heading in a positive direction, although his time on the ice already has declined going from 23-to-24 minutes in Carolina to 20-to-21 minutes for the Penguins.

By David Weightman
Tags: Chicago Blackhawks, New Jersey Devils, Ryan Hartman, Travis Zajac
This entry was posted on Sunday, March 5th, 2017 at 5:40 pm and is filed under David Weightman, HOCKEY, The Wire Troll. You can follow any responses to this entry through the RSS 2.0 feed. Both comments and pings are currently closed.