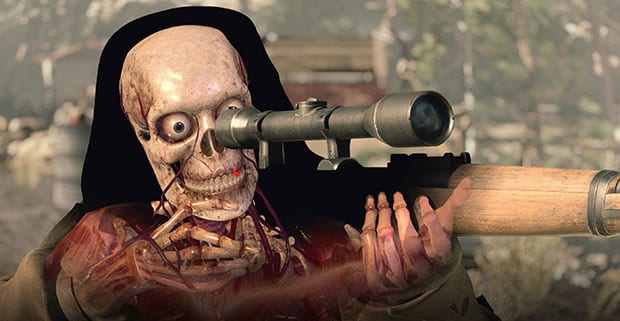 Hey ma, you’ve got a lil’ something in your teeth, I’ll get it…

Once again, the Nazi-hating folks over at Rebellion have given Karl, our favourite sniper, a new mission. In Sniper Elite 4, you’ll guide Karl through various Nazi-infested towns and installations to stop them from developing a new devastating missile system.

Kessler, the main bad Nazi in this one, is an extremely hateable man even disregarding his ties and allegiance to the Nazis, so clean off your scope and grab your TNT, it’s time to reach out and touch someone.

The first thing you might notice about Sniper Elite 4 is just how incredibly snappy and responsive the controls are. Whether you are mantling over an obstacle or settling into a sniper’s nest, Karl will strictly obey your commands and carry out actions flawlessly.

As a third-person shooter, the controls are almost identical to similar games. Your weapons are bound to the directional pad, and the various pieces of equipment at your disposal, such as grenades and trip mines, are accessed by holding the L1 button and selecting things via the left stick. It all feels natural.

Sniper Elite 4 looks much better than the series’ earlier games thanks to being developed specifically for current-generation consoles. Like previous games, though, the architecture and scenery is amazing and packed with small details that bring loads of life to the world.

Karl and his Nazi foe are also animated very well, and Karl looks comfortable in whatever environment you drop him into. The real treat (or the grotesque one) is just how much detail has been packed into the kills themselves.

Some of you may know Sniper Elite’s claim to fame: its super gory kills. Kills that make Mortal Kombat say “Alright bro, calm down.” Say you’re nested up in an elevated position and lo-and-behold Fritz has waltzed right into your crosshairs… and with a pull of the trigger, the camera will follow the bullet on its righteous path, to and through your victim, often showing a bevy of organs and bones you’ve completely obliterated.

In Sniper Elite 4, these kills have been upped quite a bit to be included in other types of kills, so if you throw a grenade and it lands right next to a guy, expect to see a slow motion scene of shrapnel piercing various points and arteries of the Nazi’s body. Melee kills also produce this effect now as well, and seeing a knife quite literally jiggle the brain to death is quite a sight indeed.

The soundtrack is superb as well, fitting the epic “Murican histree” sort of vibe. The voicework is something that we did not expect to be very good but were very surprised at its quality. This is the first Sniper Elite game in which we actually felt attachments to the main characters and severe disdain for the villain.

Every weapon effect sounds genuine and punchy, as do explosions of various types. Sending a sniper round through an engine block of a running truck is a good example of how panic-inducing the sound design can be, because anyone who has driven a car that’s gone to hell while they’re behind the wheel will understand.

What can we say? We love this series and probably always will. Rather than putting an emphasis on explosive action and run n’ gun antics, the Sniper Elite series has always been about taking a cautious approach and planning your kills.

Really the choice is up to you, as the map design welcomes any and every approach to a situation. You can also adjust the difficulty to your liking, so if you dig the realistic sniping physics you can keep them, but you can also tone down the enemy damage output in case you either want to practice or just have a great time blasting away.

Core mission structure usually revolves around either having to hunt down a VIP target for killing, destroying a critical piece of equipment, or a combination of both. Each mission has a pre-action briefing stage in which you can talk to key players in the story in order to secure additional objectives, such as shutting down the lights at a dock or killing off a Nazi-sympathizing wine expert.

These additional objectives are always fun and fit right in with whatever else you’re doing, so good on Rebellion for making sure that the extra activities didn’t feel shoehorned into the game.

There’s an adversarial multiplayer mode we were unable to find regular matches in, but the co-op modes are a bit livelier. In addition to a co-op campaign, there’s also a Survival mode and a Sniper/Spotter mode that requires and rewards strong teamwork.

Sniper Elite 4 being an amazing game may come as a surprise to some. Yes, people accept that it’s a fun deviation and the like, but this title proves that the franchise is still quite capable of evolving and surprising its audience.

By Jeff Cater
Tags: Karl, Rebellion, Sniper Elite 4, Video Game Review
This entry was posted on Friday, February 24th, 2017 at 5:25 pm and is filed under Jeff Cater, Video Game Reviews. You can follow any responses to this entry through the RSS 2.0 feed. Both comments and pings are currently closed.