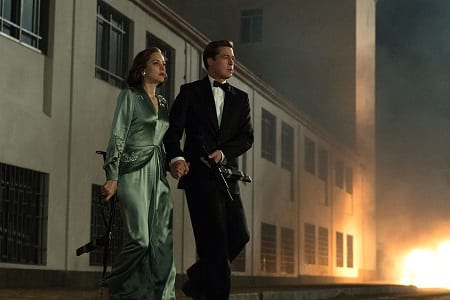 In the midst of World War II, intelligence officer Max Vatan (Pitt) is dispatched to Casablanca to meet up with Marianne Beausejour (Marion Cotillard; The Dark Knight Rises), a French spy posing as his wife for the purposes of assassinating a Nazi ambassador. The two develop feelings for one another, however, and when the job is done, Max invites Marianne to return to London and be his actual wife.

She accepts and the two are married with Marianne giving birth to a daughter, Anna. While all appears to be going wonderfully, Max is summoned for a meeting with the Special Operations Executive, which believes Marianne may be a Nazi spy. To test this theory, SOE orders Max to leave a piece of false information to be found to see if it ends up being intercepted.

Max cannot believe that his wife could be a spy, and despite being ordered to act normally and wait for the operation to play out he begins to conduct his own investigation. His recklessness does not go unnoticed by his superiors, but Max refuses to sit idly by and begins to take more and more risks to root out the truth of the situation.

Visually, Allied is impressive. There are lots of interesting scenes, blending CGI with live-action elements to great affect (at times) and creating the type of immersive feel that wasn’t possible when films were limited to sets and finding locations that still resembled the 1940s. It also offers a fairly different setting from most WWII movies with much of it concentrated in war-torn London.

While Pitt’s character isn’t as likeable as the ones he often portrays, he still works as the centrepiece of the story with Cotillard keeping pace all the way. Their chemistry feels genuine, and that helps build your investment in the very personal nature of the central plot. Veteran character actors Simon McBurney and Jared Harris deliver in limited screen time.

Although most of Allied looks really good, there are some scenes, particularly early on when Brad Pitt parachutes into the desert, that stick out due to clearly evident CGI. It immediately pulled us out of the moment, and it took a while to reinvest in the setting.

As mentioned, the character of Max Vatan isn’t particularly likeable. In fact, he gets pretty annoying by the time we roll credits. We get that he’s in love and refuses to believe his wife is a spy, but then he immediately defies orders, investigates her at such a level that he appears to have no trust in her and soon puts other active operations at risk. It felt over the top.

We won’t get into spoilers, but we will say the direction the film eventually takes didn’t resonate with us and felt very “Hollywood” rather than following a logical conclusion based on the events to that point. Allied also has a tendency to drag at times, and even a pretty grisly showdown in France between Nazis and resistance fighters can’t up the excitement enough.

There’s more than an hour of supplemental content across 10 extras, each of which is aimed at breaking down one aspect of the production: costume design, implementation of CGI, history of the weapons and vehicles, and so on. A few of them are dedicated to the story, characters and chemistry between Pitt and Cotillard (and their respective characters). It’s a pretty standard set of featurettes.

While it had big aspirations, Allied doesn’t reach the heights it’d hoped for. It looks good and is buoyed by some solid performances, but it lacks the tautness that the best spy thrillers deliver or the breadcrumbs to uncover elements on your own.

By HC Green
Tags: Allied, Blu-ray reviews, Brad Pitt, Marion Cotillard, Movie Review, Robert Zemeckis
This entry was posted on Friday, February 24th, 2017 at 9:47 pm and is filed under Herija Green, Movie Reviews. You can follow any responses to this entry through the RSS 2.0 feed. Both comments and pings are currently closed.