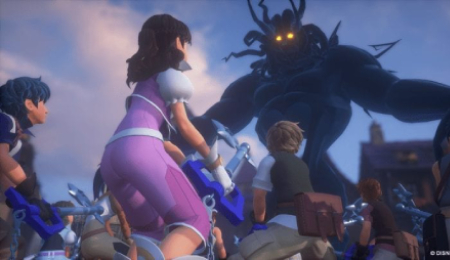 The Kingdom Hearts series is soon to be thrust into the spotlight again with its upcoming third mainline title. Given that the series has many spin-offs and a surprisingly labyrinthine mythology, Square has recently put efforts forth to catch games up. The latest is Kingdom Hearts HD 2.8 Final Chapter Prologue, which contains a 3DS remaster, a movie and a new adventure.

Given that the collection contains a 3DS game and a new one built for modern consoles, some of the controls vary. The new entry, known as Kingdom Hearts 0.2 Birth By Sleep – A Fragmentary Passage, handles like a fairly modern action game, although with a more vertical design.

However, the remake of Dream Drop Distance has a lot of issues to iron out. Combat is a bit clunkier than most entries in the series, using a convoluted deck building system for supporting abilities that’s been in a few of the spin-offs.

Again, the collection is a mixed bag due to the disparate sources of the material. A Fragmentary Passage is fairly good looking, as it uses the upcoming Kingdom Hearts 3 engine, and it has a lot of flashy effects and a unique world the explore.

Dream Drop Distance has been cleaned up from its 3DS source as well, but the roots always show, particularly in animation. Still, it ends up looking in line with the mainline games, a solid PS2 era showing with a unique art style to prop it up.

Sound design in the collection fares better. Kingdom Hearts as a series has always had pretty fantastic music, even if it often feels a little melodramatic for a game in which a duck is a main character.

Combat is punchy and enjoyable thanks to sound effects that pop. Voice acting is a mixed bag, with series mainstays like Haley Joel Osment as Sora having aged out of the role long ago. At least the Disney voice actors tend to shine.

Still, for those that have stuck with the series, it has a decent amount of value to offer. Dream Drop Distance HD is the meat of the package with it being the only fully fleshed out game on offer. Translation to modern consoles has alleviated some of the issues that game had, namely an awful camera.

Relics of its 3DS origin still remain, though. Minigames that were clearly designed around it have been remade, but they still feel out of place here, and quickly get tedious. Similarly, the game’s movement mechanics felt designed around not having that second analog stick, and that setup now feel extraneous and awkward.

A big hook of Dream Drop Distance is that it explores a variety of Square and Disney properties that are a little lesser known. One of the first characters you meet is from The World Ends With You for instance.

This time around, players control Riku in addition to Sora, which is built around a sometimes irritating mechanic in which your time with each character is mandated by an ever draining timer. After it ends, the characters swap, which feels gimmicky.

A Fragmentary Passage fares better. It stars Aqua, a main character from the Birth by Sleep spin-off. It acts more or less as an introduction to how Kingdom Hearts 3 will play. A gorgeous tour through a shattered Cinderella world with simple but fun action, it serves as the highlight of the whole package. That being said, it’s very short, feeling more like an appetizer than a meal.

Kingdom Hearts x Back Cover is the last feature of the collection. A movie meant to flesh out some background, it is, quite frankly, pretty awful, and features a lot of the series’ story issue mainstays like mysterious individuals talking cryptically about a bunch of nonsense. And it doesn’t let you beat bad guys up with Aladdin to break up the tedium. It is hard to recommend even to long time fans.

Kingdom Hearts HD 2.8 Final Chapter Prologue is a mixed bag, and while bearing in mind the bulk of your time will be spent with a 3DS remaster, it could be worth a look. However, the upcoming collections of the mainline games are likely to offer better value.