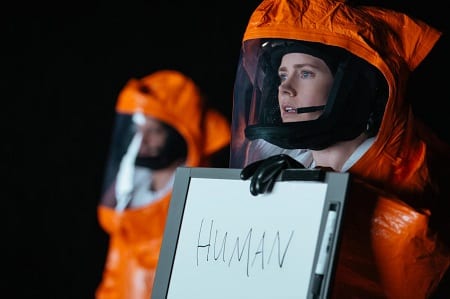 With eight Academy Award nominations, including Best Picture, Arrival, uh, arrives with accolades rarely afforded science fiction. Then again, this isn’t typical sci-fi, occupying a space similar to previous films like Interstellar and Contact, though even those are action heavy in comparison. While it’s characterized as “intelligent sci-fi,” Arrival tells a grounded, decidedly human story.

Twelve alien craft simultaneously descend on Earth scattered across the globe, including one in rural Montana. Louise Banks (Amy Adams), a language professor, is approached by Colonel Weber (Forest Whitaker) with a recording of the aliens’ vocals and asked what she thinks it means. While their first meeting yields little, Weber quickly returns to whisk Banks off to the landing site.

Once there, Banks is paired with Ian Donnelly (Jeremy Renner), a theoretical physicist, with the two of them put in charge of finding a way to communicate with the aliens. As they’re starting from scratch it is an arduous process, but they start to make headway due in no small part to nearly unprecedented cooperation between the dozen countries that have ended up hosting the visitors.

Eventually, however, some of the countries get impatient, and when they translate the word “weapon” China goes dark, followed by the others. With military action now seemingly inevitable and cut off from broader input, Banks and Donnelly must find a way to ascertain the “heptapods'” intentions before things head down a more violent path.

We’re not the biggest Adams fans, but she delivers here — and make no mistake, despite getting co-billed with Renner, this is Adams’s film. The scenes with her daughter prove very emotional, and she does a great job in portraying the mix of excitement, anxiety and sheer exhaustion that accompany the weight of the responsibility she’s asked to carry.

With Academy Award nominations in both Sound Mixing and Sound Editing, Arrival features one of the more memorable soundscapes we’ve heard in many years. With its transitions between scenes, the unique tracks and effects, it’s immediately arresting and stays with you after the credits role — a feat that’s doubly impressive when you consider it’s basically all original acoustic tones.

Originality is also a strong suit, both from the story and the design/look of the film. Like how the aliens and their craft look different than the usual one-offs we’ve come to expect over the years. There just aren’t many other movies that spring to mind as comparable when watching it.

Even if you accept that this is the rare non-action sci-fi entrant, there are still moments when Arrival could’ve benefited from a little more conflict. Nearly all the drama occurs off screen — nations girding for combat, a cease in communications — and the one brief action element feels shoehorned in. Really? That happened on the down low at the most secure site in human history?

More than an hour of extras is on offer, headlined by “Xenolinguistics,” which gives an in-depth look into the making of the film and the unique place it occupies within the sci-fi genre. There is also a pair of featurettes on Arrival’s audio side. Normally that’s not the kind of stuff that interests us, but as noted the sounds presented are really unusual, which makes these worthwhile viewing.

Arrival takes a different approach to first contact than other films, concentrating on the challenges of communication and importance of working together as a species. It’s idealistic and short on action, but it’s still very enjoyable.

By HC Green
Tags: Amy Adams, Arrival, Blu-ray reviews, Forest Whitaker, Jeremy Renner, Movie Review
This entry was posted on Monday, February 13th, 2017 at 1:58 am and is filed under Herija Green, Movie Reviews. You can follow any responses to this entry through the RSS 2.0 feed. Both comments and pings are currently closed.