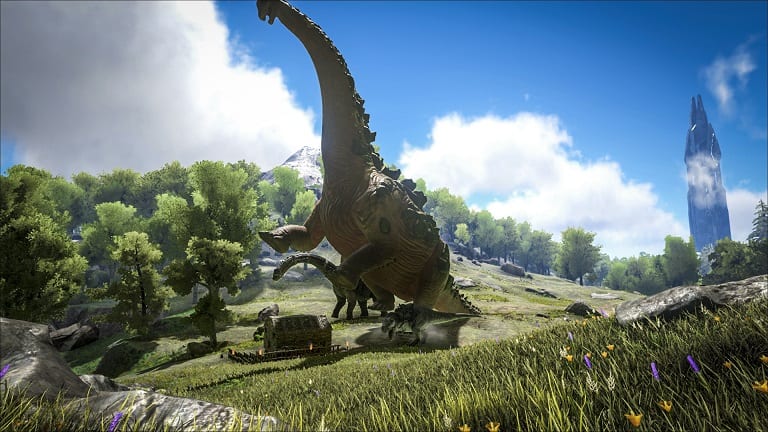 Maybe J.K. Simmons knows where to get a deal on dino insurance.

Ark: Survival Evolved is a gigantic game by the folks at Wildcard Studios and Instinct Games. In it, you create a character to take to a dangerous island inhabited with all sorts of long-extinct and fantastic creatures such as raptors, mammoths and even yetis! Other survivors (players) also roam the map in hopes of surviving as long as they can. You can either aid them… or become a hindrance.

You start naked on a beach with nothing more than a strange diamond-like gem embedded into your arm. Pressing “circle” brings forth a digital menu from said gem, and then you’re tasked with your first real challenge of Ark: the interface.

Originally, the game was developed strictly for PC (for which it’s technically still in Early Access), and the trials and tribulations of converting a mouse-based inventory management system to one based on thumb-stick selection proves to be quite difficult.

It’s not unusual to accidentally shift around the wrong item or craft the wrong thing, as there seems to be a split second of latency when making quick menu adjustments. As long as you slow down and really pay attention to where your selection cursor is, then you won’t have a problem — then again, when you’re freezing to death and need to quickly build a campfire you’re at the mercy of the interface as much as you are the elements.

Through and through, Ark is a game about survival, and it gets deep. Not only can you craft houses, build forges, and explore ruins, but you may also tame dinosaurs and even put frigging saddles on them!

It takes a bit of time depending on the dinosaur, and methods of taming vary between species, but few things are more satisfying than knocking a Triceratops unconscious and stuffing berries down his throat until he loves you enough to let you ride him.

Flying creatures may also be tamed, but unless you’ve upgraded your tech accordingly then it’s quite a challenge knocking out a Pterodactyl or Terror Bird.

Speaking of tech, there’s an absolute plethora of things to build. Maybe you want to build a pen to hold all of your dodo birds and get them to mate. Go ahead! Sick of looking for a certain type of plant? Find some seeds and pipe some water in from the river to grow your own!

Not all the tech is just for building of course, as there are plenty of axes, spears, guns and other various pieces of gear waiting to be crafted. We’re not big crafting fans — it has become something of a buzz term during this generation of gaming and many titles shoehorn it in for crafting’s sake — but Ark is a game in which it’s actually not mind-numbingly boring to create things.

Ark allows people to join PvP or PvE servers, but either one right now comes with a certain amount of griefing possibilities. In PvP there exists Mega Tribes formed by players that pretty much have a run of the place. If you don’t play by their rules there, you can count on your character being knocked out or jailed, and being force-fed your own feces.

In a PvE server it’s not so much aggressive players hunting you down, as they can’t damage you in a PvE environment, but they can certainly kite a bunch of angry dinosaurs to your base and have it get stomped down in seconds. Thanks, guys!

Griefing aside, Ark: Survival Evolved is a great way to relax and spend some time with your friends. We played with a buddy for about five and a half hours a few nights back and it felt like mere moments. Even with the truckload of bugs and glitches the game currently has, it’s an extremely fun time.

Speaking of which, one thing about glitches on the PlayStation 4 version that we’ve noticed is that they’re rapidly disappearing, as the folks who made the game have been feverishly patching issues and working to enhance the gameplay.

Ark: Survival Evolved on the PlayStation 4 also marks Sony’s first real venture into Early Access gaming, and hopefully it opens the door nice and wide so other great games like this can get more and more players.

Ark: Survival Evolved is shaping up nicely, and there’s no indication that it’ll cease to do so anytime soon. What we have is a unique survival game that really feels like it’s about survival, as hunger, thirst and fatigue all play massive roles in the game. Almost as massive as a Titanosaur.

By Jeff Cater
Tags: Ark: Survival Evolved, J.K. Simmons, Video Game Review
This entry was posted on Tuesday, December 27th, 2016 at 1:04 am and is filed under Jeff Cater, Video Game Reviews. You can follow any responses to this entry through the RSS 2.0 feed. Both comments and pings are currently closed.