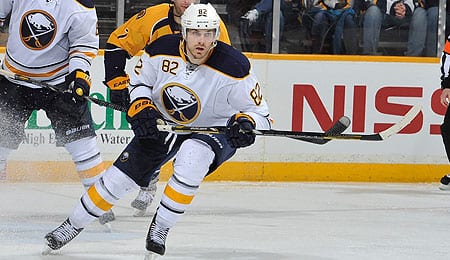 Marcus Foligno is getting a shot to shine. (BLTD Sports)

Welcome back to another week of Fantasy hockey. It being Christmas Day, we opted to allow NHL Editor Dakota Case to leave the office for the day while we took over the Troll this week. No one can accuse of us of being Scrooge. Hell, we’re even going to put coal in the stove ourselves. Oh, the humanity!

This week, Steve Downie expressed his displeasure at Don Cherry (join the club, Steve); ageless Jaromir Jagr moved past Mark Messier to become No. 2 on the NHL’s all-time scoring list; and the Blue Jackets just can’t be stopped, winning 12 straight games as part of what’s looking like the best season in franchise history.

Marcus Foligno, LW, Buffalo Sabres (ESPN: 4.4 per cent; CBS: 5 per cent): Foligno has never been much of a Fantasy asset, but there are some things to like about his game right now. For starters, he’s racking up the PIMs with two fights in the last three games (see video below) after a somewhat pacifist start to the season (for him). More importantly, Foligno was recently moved onto the top line in Buffalo and has picked up two assists over the last four games, while recording a +1 in five straight games until Friday’s loss. With 10 even strength points already, he should shatter his career high of 17, which he’s accomplished in each of the last three seasons. Deeper league owners — or those chasing PIMs — should take heed.

Zack Smith, C, Ottawa Senators (ESPN: 11.9 per cent; CBS: 16 per cent): Before getting shut out on Thursday, Smith had been blazing, potting three goals (including a shorty) with three assists over the previous three games, going +6 in the process. After a very quiet November, he’s now recorded eight points in 11 games this month, and after his career best +16 last season, he’s headed in the right direction now, bumping his +/- to the positive side of the ledger at +5. Ottawa’s third rounder from 2008 is unlikely to touch last season’s 25-goal breakout, but at least he’s shaken off the cobwebs and put himself back on the Fantasy radar.

Brandon Dubinsky, C, Columbus Blue Jacksts (ESPN: 30.6 per cent; CBS: 24 per cent): Dubinsky picked up four assists over three games before taking a goose egg on the scoresheet Friday. This is another player that got off to a slow start, but is now turning it around. Dubinsky is captain of the NHL’s hottest team, and right now, he’s reaping the benefits of playing for such a scorching club.

Josh Bailey, LW, New York Islanders (ESPN: 16.4 per cent; CBS: 20 per cent): Bailey has dropped four dimes over the last three games. picking up two of them on the power play. He’s not much of a goal scorer (he’s never topped 16 in any one season), but is seeing more ice time than ever and recording enough assists with the man advantage to be of use. Bailey has proved durable the past couple of seasons as well, which is a nice asset at a time when the injury ninja is always ready to strike.

Mathieu Joseph, RW, Tampa Bay Lightning (ESPN: NA; CBS: unowned): Simply a dynasty league option at this point, it’s time to put Joseph on your radar as the Bolts’ fourth rounder from 2015 just signed a three-year entry level contract. All he’s done in the Q this season is score 25 goals through 29 games while going +23. Yes, Tampa Bay has yet another skilled forward on the way in Joseph.

Mark Letestu, C, Edmonton Oilers (ESPN: 10.6 per cent; CBS: 8 per cent): Letestu has potted three goals and four assists over the last six games, and is now averaging nearly a point per game this month after managing just six through the first 21 games. He’s already two-thirds of the way to his assist total from all of last season. Hell, Letestu even put together a Gordie Howe hat trick on Wednesday!

Jason Chimera, LW, New York Islanders (ESPN: 1.3 per cent: CBS: 3 per cent): Although he did pick up an assist on Friday, Chimera hasn’t contributed much offense this season after matching his career high with 20 goals in 2015-16. However, he keeps laying people out, delivering five hits Friday to give him 60 on the season. That’s food for thought if you’re chasing the category in a very deep league.

Joel Edmunson, D, St. Louis Blues (ESPN: 0.9 per cent; CBS: 1 per cent): It looks like the Blues have yet another blueliner capable of delivering some offense with Edmunson breaking out for four helpers over the last four games. He’s also racking up the penalty minutes while seeing a major uptick in PT over the last week. Edmunson is generally considered a defensive defenseman, but his recent production suggests he can help you in a very deep format.

Juuse Saros, G, Nashville Predators (ESPN: 1.6 per cent; CBS: 12 per cent): Saros doesn’t fit the recent trend towards massive goalies, but from what we’ve seen out of him this season, we believe we have finally seen Nashville’s post-Pekka Rinne plan. Saros was lights out in the AHL last season in his North American debut, and in five starts with the Preds this season, all he’s done is record a 1.39 GAA and .950 save percentage. Um, perhaps it’s time to give Rinne some more rest?

By RotoRob
Tags: Marcus Foligno
This entry was posted on Sunday, December 25th, 2016 at 10:28 am and is filed under HOCKEY, RotoRob, The Wire Troll. You can follow any responses to this entry through the RSS 2.0 feed. Both comments and pings are currently closed.