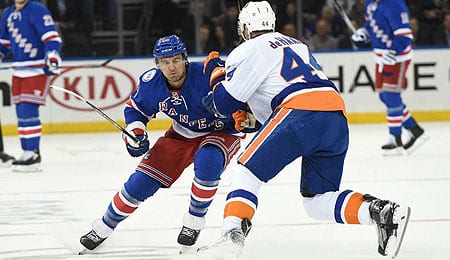 So, um, remember when we recommended Montreal Canadiens backup goalie Al Montoya as a good bench option for your Fantasy team? Um, yeah, we’re sorry about that… Montoya and the Habs got hammered 10-0 by the Columbus Blue Jackets in what will almost assuredly be the most lopsided game of the 2016-17 NHL season. At least they got it out of the way early.

The league’s powerhouse teams are back in working order for the most part, too. Pittsburgh has been dominant with the return of Sidney Crosby and the point-per-game pace typical of Evgeni Malkin. Chicago has also hit a hot streak with Artem Anisimov on fire of late. The Minnesota Wild has come back down to earth with two one-goal losses on the week, but Devan Dubnyk remains one of the NHL’s best in goal with just three goals allowed in his last five games.

Also, who didn’t love Max Domi’s one-punch KO of Ryan Kesler in the first period of the Coyotes-Ducks game on Friday? You can bet his dad taught him a thing or two there. On to the picks!

Michael Grabner, LW/RW, New York Rangers (ESPN: 13.7 per cent; Yahoo: 14 per cent): The former Islander has been on fire this season while playing with New York’s other NHL team. This week, Grabner piled up five goals, seven points,  a plus-9 rating and 12 shots on goal for the Rangers while flashing some superb transitional and passing skills even while short-handed (see video below).

Rickard Rakell, C, Anaheim Ducks (ESPN: 47.4 per cent; Yahoo: 25 per cent): A restricted free agent holdout at the start of the season, Rakell has more than made up for it since his return to the ice. He had three goals, six points, a plus-1 rating, two power play points and 13 shots on goal last week.

Nazem Kadri, C, Toronto Maple Leafs (ESPN: 46.5 per cent; Yahoo: 34 per cent): The Leafs are crawling with elite young talent, but the vets are putting up the points, too. Toronto’s 2009 top pick, Kadri had three goals, a plus-1 rating, 26 penalty minutes and 12 shots on goal in four games.

Dennis Seidenberg, D, New York Islanders (ESPN: 11.8 per cent; Yahoo: 12 per cent): Seidenberg had a fantastic week, and not just by defenseman standards. In four games, the 2011 Stanley Cup champ had two goals, six points, a plus-5 rating, eight penalty minutes and four shots on goal while averaging 20:56 of ice time.

Nikolaj Ehlers, LW/RW, Winnipeg Jets (ESPN: 46.5 per cent; Yahoo: 30 per cent): Winnipeg is yet another Canadian team filled to the brim with youth. Former Halifax Mooseheads star and 2014 top pick Ehlers had a great week with two goals, five points, a plus-2 rating, four penalty minutes and 15 shots on goal in four games. He also averaged — as a forward — over 20 minutes of ice time over that span, meaning he’s considered by Jets coaching staff to be a key part of the Winnipeg attack.

Damon Severson, D, New Jersey Devils (ESPN: 35.4 per cent; Yahoo: 19 per cent): Severson is absolutely on fire from the Devil blueline, recording five points, including two goals, over the last three games. He actually leads all New Jersey players with nine points over the first 10 games as he’s well on his way to shattering his output last season of 20 assists. This kid has come of age and needs to be added in all formats, pronto.

By Dakota Case
Tags: Michael Grabner, New York Rangers, Nikolaj Ehlers, Rickard Rakell
This entry was posted on Sunday, November 6th, 2016 at 3:43 pm and is filed under Dakota Case, HOCKEY, The Wire Troll. You can follow any responses to this entry through the RSS 2.0 feed. Both comments and pings are currently closed.