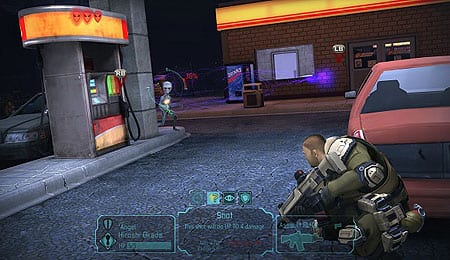 You can just imagine what an alien invasion has done to gas prices.

As I’ve mentioned before no doubt, I am a console gamer, through and through. However, there have been a couple PC titles to rope me in over the years, perhaps none more so than XCOM: UFO Defense, which also saw a release as a PlayStation title. I was drawn to the combination of turn-based combat and resource management, and when I heard 2k Games was resurrecting the series with the release of XCOM: Enemy Unknown for Xbox 360 and PlayStation 3 I was, in a word, giddy.

There’s always a concern when games with PC roots makes the trek to consoles. Such worries are assuaged almost immediately with Enemy Unknown. The setup is logical and easy to use with the right trigger toggling between movement and action commands. Moving a coloured grid shows your available destination points while the d-pad manipulates the camera… you can also cycle between members of your squad with the bumpers.

Once you switch to the action menu you’ll be able to use your squad’s abilities and target enemies as well as take up defensive positions or reload your weapon. Here d-pad shuffles through your available actions, and once you take aim the bumpers let you check out your targeting options (complete with hit and critical percentage breakdowns). Every once in a while you might inadvertently move to a grid that you did not intend and wish there was a cancel function, but outside of that it’s nearly flawless.

While a good chunk of the game is spent in XCOM’s headquarters, which doubles as a hub and has limited graphical involvement, the combat sections are shown from an isometric perspective with the environments broken up into sizable grids. There isn’t a ton of power behind the visuals, but they contain a respectable amount of detail and enough variety that they don’t get stale even as the missions begin to pile up. Weapon fire and explosions also look good.

In-game cinematics pop up whenever you fire upon an enemy, or sometimes even when you dash from cover to cover. It’s meant to make combat a bit more visually dynamic, and while it succeeds to a limited extent it’s also the source of some awkward animations. Soldiers routinely look one way and fire another or have their guns clip through solid objects to fire on an enemy leaving cover. It doesn’t detract from the action; rather it makes an otherwise tight package feel occasionally sloppy.

Decent voice acting and a non-intrusive soundtrack highlight the game’s audio performance. Both of these elements have a limited impact on the game, but neither takes anything off the table by becoming a distraction. The same cannot be said for the repetitive squad chatter — I really don’t need to hear each member of my squad acknowledge an order to move from Point A to Point B. Sound effects and alien grunts are both solid.

If you’re looking for a complex tale, I’ve got some bad news. X-COM: Enemy Unknown can be effectively summed up in three words: aliens have invaded. Yes, there is a storyline to move the game forward and provide some context as technological breakthroughs are metered out. However, there’s nothing time sensitive and you can pretty much advance the plot at your discretion with items labeled “PRIORITY” to be constructed or researched when you’re ready.

Strategy is the name of the game here, and not just on the battlefield. Your ability to successfully deploy your ground forces is only a small part of an overall experience that includes resource management, researching new technologies, training troops and building new facilities all while keeping a close eye on your budget. It’s a deep, somewhat complex dynamic where bad decisions early on can undermine you down the road.

Plus, your moves bleed into the satisfaction level of the member nations of XCOM. Each unheeded call for aid raises the panic level in that country (and continent), and many missions require you to choose a location when alien abductions or terror attack are taking place. It’s all part of a delicate balancing act that makes Enemy Unknown so much more than just a turn-based combat game. Every time you build or research one item something else gets pushed to the back burner. Resources are finite, everything costs money and it’s up to you to strike the proper balance between them.

While all that is critical to success, the most engaging gameplay comes in the form of ground missions where a team of up to six units must confront and eliminate the alien threat — some scenarios involve rescuing civilians or personnel, but extraterrestrial eradication is always a key element. As noted, the battles are turn-based, strategic affairs. By default, each unit is given two “moves” per turn, though many actions exhaust both halves of your meter.

Battles utilize the “fog of war,” whereby enemy units will only appear once they’ve entered the actual line of site of one of your squad members. Once spotted, they’ll scurry into cover and the firefight will commence. Hits, misses and damage are statistically determined based on a number of factors, including your soldier’s weapon accuracy, distance and level of cover. There are also some area-of-effect explosives, such as rockets and grenades, that are manually aimed and deal set damage.

Killing enemies earns your soldiers experience points, which result in promotions. They initially start as rookies, and upon their first rank increase they are assigned a specialization (such as support, heavy or sniper). From there, each promotion is accompanied by a new skill or stat boost, allowing some diversification among your group.

It’s possible to assemble a fairly overpowered squad this way, but the game pokes holes in that strategy by requiring soldiers injured in ground ops to heal, thus making them unavailable for a specific amount of time based on the severity of their wounds. That encourages you to build up multiple troops at each specialization as there are few things more daunting than trying to tackle a “very difficult” terror mission with a squad comprised mostly of rookies.

As much as I enjoyed X-COM: Enemy Unknown, it’s not without some issues. Perhaps most annoying is the feeling that certain aspects of battles are scripted as opposed to being statistically based. For example, I had a sniper shot lined up on an alien with a 95 per cent hit rate. I saved before I fired to test out my theory, and then watched as my soldier missed the shot seven times in a row; so, either the computer had an incredible string of luck on its saving throws or I simply wasn’t meant to kill that alien at that particular moment in time.

Battles can also go sideways in a very “slippery slope” manner — by which I mean a chain reaction of events will take things completely out of your control. For example, one person getting killed or having their mind controlled will make a soldier panic, who then shoots and kills a teammate in his terrified state, which continues as one death turns into a complete disaster. It’s frustrating no matter when it happens, but when a battle-hardened individual goes to pieces it feels exceptionally cheap.

As I touched on earlier, poor planning at any point during the game can have serious ramifications down the road. Even though it’s a conscious design choice (and one that rewards good decision making) it’s disconcerting to think all your hard work can be for naught. My advice: save frequently and make sure you have more than one file.

Developer Firaxis has done an excellent job updating the X-COM series while still retaining all the crucial elements that have defined it. Enemy Unknown is a satisfying experience on multiple levels and easily one of my favourite games of 2012.

By Herija Green
This entry was posted on Saturday, October 27th, 2012 at 1:49 pm and is filed under Herija Green, Video Game Reviews. You can follow any responses to this entry through the RSS 2.0 feed. Both comments and pings are currently closed.