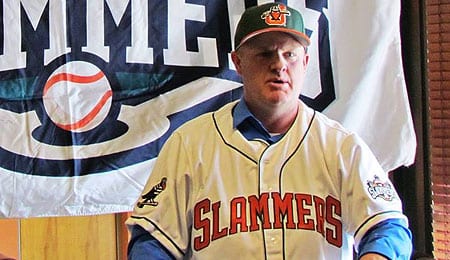 Independent Baseball doesn’t just salvage the careers of players; it can also help managers revive themselves.

Take Jeff Isom, for instance. He represents an example of both a player and a manager who used Indy ball to lengthen his career.

Originally an 18th round pick by the Pirates in 1993, this southpaw was too hittable in his three minor league seasons, mostly in relief. After topping out at High-A, Isom took his game to various Indy leagues, pitching another five years and getting more of a chance to be a starter.

By age 27, he was done as a player and began his managerial career, spending seven years as an Indy league skipper before finally returning to organized ball where he managed in the Brewer system for five years, once again topping out at High-A. In 2013, Isom returned to managing in the Independent Frontier League, and he’s enjoyed much more success (.519 career winning percentage in 11 years) than he did in the minor leagues.

This season represented perhaps Isom’s greatest feat as a manager, as he guided the Joilet Slammers to their first playoff appearance since 2011.

Now let’s review a full slate of games around the bigs on Wednesday, as Daniel Murphy seems done for the rest of the regular season; Tim Tebow went yard on the first pitch he saw in Instructional League play; and the Cubs have locked up President of Baseball Operations Theo Epstein for another five years.

We’ve been remiss in mentioning the career year Seattle third baseman Kyle Seager is enjoying, but after he delivered two hits Wednesday, including a homer to reach 30 for the first time, we need to spill some ink. He sure enjoyed his time in Houston this week (5-for-14), helping turn around what’s been a tough month, slash line wise. Power-wise, Seager has been amazingly consistent, launching five homers in each of the six months of the season to date while also reaching 35 doubles for the second straight year. He’s right in his power prime and it’s showing this year in his extra-base pop. Career highs in RBI, dingers and BA have helped establish Seager as a top 10 player at the hot corner. Oh, and his glovework (see video below) is nothing to sneeze at, either.

Another Fantasy stud that is on a tear right now is Detroit first baseman Miguel Cabrera. He’s homered in consecutive games, driven in nine runs over the last four and hit safely in seven straight. Miggy is enjoying his finest month of the season with a whopping 1070 OPS helping him to improve on what’s been a slightly down season for him. Of course, that’s simply a matter of perspective, isn’t it? Cabrera has stayed healthy this year, so his counting cats bounced back in another productive campaign. However, his dramatically reduced walk rate has hurt his slash line in a big way and now he’s playing on a wonky knee which doesn’t exactly help him on the basepaths. And you know Cabrera definitely needs all the help he can get when it comes to running. We’re also slightly concerned about his K rate rising this year, but it’s still nowhere near the point that it will affect his ability to produce elite numbers, so we’re not going to sweat it much.

Craig Kimbrel’s first season in Boston has been tough, from a bottom line results perspective. He got burned big time Wednesday — his second straight appearance getting touched up — and actually had to be removed from the game, but got saddled with the loss after serving up a hit and three walks, the last of which scored the Yankees’ first run of the game. Kimbrel was phenomenal in August, but control issues have really hurt him this month. An injury in mid-season has resulted in a lower workload for him this year, yet he’s managed to easily break his career high in losses while recording his worst ERA ever. Kimbrel’s FIP is just slightly higher than what it was last year, so we’re not overly concerned. In fact, we’d suggest he might be a good buy-low candidate in keeper leagues — if you’re willing to pay for closers, that is.

Now it’s your turn. Let us know in the comments below where you’d slot Seager among third basemen for 2017.

By RotoRob
Tags: MLB
This entry was posted on Thursday, September 29th, 2016 at 9:33 pm and is filed under BASEBALL, Independent leagues, MLB Today, RotoRob. You can follow any responses to this entry through the RSS 2.0 feed. Both comments and pings are currently closed.