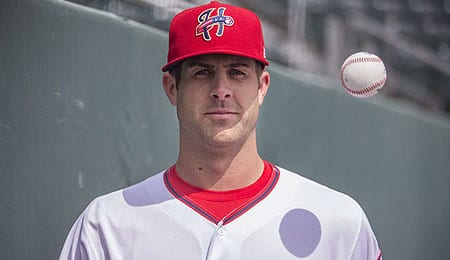 While Washington superstar Bryce Harper gets all the attention, his older brother Bryan — a 30th round pick by the Nats in 2011 — continues to toil away in the minors. Bryan, exclusively a reliever in his pro career so far, is getting closer. He recorded a brilliant 1.50 ERA in 20 games at Double-A this year, earning a second look at Triple-A, this time for 20 games, during which he pitched pretty well (2.95 ERA) while averaging almost a strikeout per inning. If Bryan makes it to the Show, we have a feeling this will be The Brett Brothers, Part II. A superstar hitter and scrub pitcher.

Need a bit of offense down the stretch in your AL-only or deeper mixed league? How about Cleveland outfielder Lonnie Chisenhall? With another hit, walk and run Thursday, he’s now hit safely in five straight, scoring a run in the last three games and is suddenly flirting with a .300 BA. On Sunday, he played the hero and got mobbed by his teammates (see video below). Yes, Chisenhall will mostly sit against lefties (so bear that in mind in daily move leagues), but the fact he still qualifies at third base is a nice bonus, for the rest of the season anyways. Despite starting the year on the DL, he’s seen more action and has responded with a slugging percentage more fitting for a corner outfielder. Chisenhall seems to have found his niche as a solid platoon player, and the fact that he’s on the strong side of it gives him some value.

What a great story the Yankees are writing since purging themselves of so much high-priced talent. They’ve won a season high five straight and the latest kid to play hero was rookie Tyler Austin, who mashed a walk-off dinger on Thursday. His recent play has helped spark this run as he’s hit safely in all five games with four runs, two doubles, two homers, five RBI and a walk. Given how few runs Austin had scored previously, this is a welcome boost to his counting cats and he’s raised his BA nearly 85 points back to a more respectable .245. After shaking a very tough slump, suddenly Austin looks like an option in a deep AL-only league.

You might want to give some consideration to Phillie SP Alec Asher as a streaming option after his brilliant season debut Thursday. Part of the booty the Phils got for Cole Hamels, Asher was kicked around last year and then missed 80 games at Triple-A earlier this season thanks to a PED suspension. But all of that is forgotten now after Asher shut out the Nats for six innings, giving up just two hits and a walk. The 24-year-old righty is tall and thick, and seems far more ready for his second crack at the bigs. Asher doesn’t get the attention the other prospects do that the Phillies received in that huge deal last year, but you need to keep an eye on this kid.

Now it’s your turn. Let us know in the comments below what kind of MLB career you think Bryan Harper might have.

By RotoRob
Tags: MLB
This entry was posted on Friday, September 9th, 2016 at 12:57 pm and is filed under BASEBALL, MLB Today, RotoRob. You can follow any responses to this entry through the RSS 2.0 feed. Both comments and pings are currently closed.