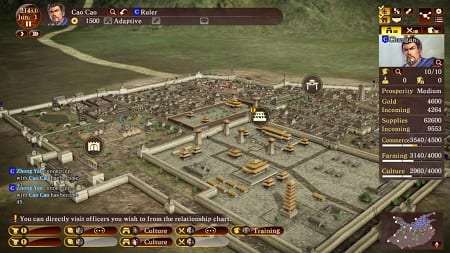 Romance of the Three Kingdoms XIII is the latest in the long-running strategy series based on a much studied and discussed period of Chinese history. With this entry the series makes its current generation debut. Can it reach new gamers, or is it destined to remain a niche experience?

A large majority of your time in this entry is spent in menus, something as relative newcomers to the series we were surprised by. Players will spend a lot of time navigating city or army management before they actually engage in the combat.

Combat itself is fairly simple, with armies often just needing to be pointed in a general direction, though player avatars include some super moves to use that can quickly decimate a foe. There are a few too many menus and functions to get used to, but the game allows you to pause so you can play things out, and so even when you’re overwhelmed it’s easy enough to get your bearings.

While this marks the series’ debut on PS4, the game is still designed with platforms like the PS3 in mind, and as such it is not a particularly attractive game. The overworld is sparse and far too many battle encounters reuse the same set of maps over and over again.

There’s some personality to be found in the city management sections as they deal more closely with the various historical figures and their portraits and models are pretty great. There are some frankly odd performance issues as well during larger engagements.

Romance XIII contains dual audio, though not the usual type. It’s voiced in both Chinese and Japanese. For western players there’s little reason to not play in Chinese as it is the dialect of the setting and helps provide some atmosphere.

Voice acting is generally good as well, though at times it can feel like you’ll go long stretches with nobody saying anything but catch phrases and battle chants. Music is great and is smartly integrated into the battles and campaigns so that it doesn’t overwhelm them when the game gets intense.

Despite having a “13” in its name, Romance of the Three Kingdoms XIII is one of only a few entries to hit stateside. It’s also in a genre (grand strategy) which is woefully underrepresented on consoles. And so this entry has to prove both the genre and franchise belong. Unfortunately, it doesn’t provide enough evidence to either subject.

In the game’s main mode, players can select from a staggering amount of real historical figures to play as, or create their own to attempt to navigate the war. Your avatar’s lot in life determines much of your gameplay focuses.

Lords will be able to issue orders to their officers, while playing as one of them means being assigned a lot of arbitrary goals. Playing an officer is a decent way to get acclimated to the game since it provides a bit more structure, but all of the officers end up playing similarly. You’ll get the same types of orders from the lord known as a brutal warlord that you would from one known for his silver tongue.

There’s also a Hero Mode. This is mostly a very long tutorial in which you’ll play as a few important figures and learn the game’s mechanics in a more direct way.

Gameplay itself is largely split between city planning and open warfare. We found ourselves strangely drawn more to the city planning than the combat. It’s fairly in-depth without getting too complicated, and a lot of the game’s personality shines as you forge alliances and better your leader. It won’t replace Civilization anytime soon, but it’s more than serviceable.

Combat itself feels pretty unpolished and simplistic. Enemy AI is often terrible, only really ever posing a threat when they vastly outnumber you. And while we initially opted for direct control during those sorts of circumstances, we found ourselves using the game’s auto-resolve more and more as time went on.

There are a few nice touches like duels and debates. Duels are between enemy soldier leaders, and debates between the more academically minded. They are simple mini-games that, if won, will gain you benefits like reducing enemy morale. They are rare enough that they provide a fun distraction even when you’re already dominating your foes.

Romance of the Three Kingdoms XIII is a solid title that unfortunately lacks long-term depth. It is, however, one of the few active strategy franchises on consoles. So if you’re without a PC, it could be worth investing some time on.

By Brian Gunn
Tags: Romance of the Three Kingdoms XIII, Video Game Review
This entry was posted on Monday, September 5th, 2016 at 5:02 pm and is filed under Brian Gunn, Video Game Reviews. You can follow any responses to this entry through the RSS 2.0 feed. You can skip to the end and leave a response. Pinging is currently not allowed.