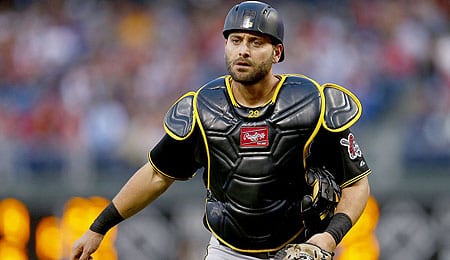 The Pirates are now without Francisco Cervelli. (Wheelingnailers.com)

Pittsburgh Pirates catcher Francisco Cervelli had started six straight games and 11 of 12 before taking a seat on Sunday.

Perhaps he should have kept on going, as on Monday the veteran backstop suffered a bruised thumb that caused an early exit and forced him to the bench on Tuesday.

Although he had an RBI single before getting hurt Monday, Cervelli hasn’t exactly been killing it lately (.231 in the last week). And while he enjoyed a solid August, overall this season his offensive regression has continued (it doesn’t help that he’s been getting robbed, as you see in the video below), leaving him as an asset in just NL-only or maybe two-catcher formats.

Of course, this isn’t Cervelli’s first health woe of the season. He missed over a month earlier this year with a broken hand, so his at-bats are way down this season. Needless to say, that’s had a massive effect on Cervelli’s counting cats. But of greater concern is he simply isn’t hitting anywhere as well as he did in 2015, when he proved he deserved to be a No. 1 man by batting .295 with fantastic on-base skills.

Cervelli is now 30, so his window to remain a starter isn’t huge and this setback of a season is really doing damage to his keeper value. That fact that his glovework is generally declining as well doesn’t help.

Chris Stewart, just off the DL last week, will stand in while Cervelli is hurt, and while Stewart somehow has more runs this season despite almost no PT thanks to knee surgery, he is currently hitting 17 points south of his playing weight of 210 pounds, which tells you everything you need to know about his chances of Fantasy value.

If you’re an Cervelli owner and concerned about his ability to make it back quickly or are simply fed up with him, we’d suggest looking into one of the following alternatives: Nick Hundley, Tom Murphy or Welington Castillo.

By the way, the Buccos aren’t just losing now. They’re getting hammered. How about an aggregate score of 56-29 over the eight-game skid? Man, a lot can change in a week, huh? Pittsburgh was right in the thick of the race, but now it’s reeling and in danger of completely falling out of contention.

In fact, this patch has dropped the Pirates under .500 for the first time since the beginning of July. Injuries to the rotation (Gerrit Cole and Ryan Vogelsong) haven’t helped the situation.

Now it’s your turn. Let us know in the comments below what you plan to do with Francisco Cervelli.

By RotoRob
Tags: Chris Stewart, Francisco Cervelli, Nick Hundley, Pittsburgh Pirates, St. Louis Cardinals, Tom Murphy
This entry was posted on Wednesday, September 7th, 2016 at 10:49 am and is filed under BASEBALL, Injuries, RotoRob. You can follow any responses to this entry through the RSS 2.0 feed. Both comments and pings are currently closed.