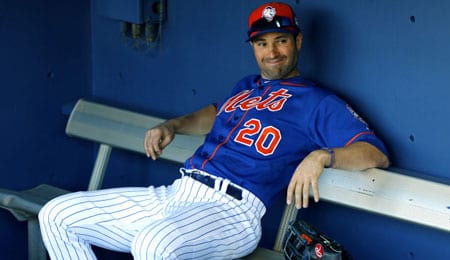 Thanks to his back, Neil Walker gets lots of time sitting on his ass. (nypost.com)

A week ago, we took a look at the defending World Series champion Kansas City Royals, and their quest to return to the playoffs. Now, with four weeks remaining in the season, let’s switch leagues and find out how the defending National League champion New York Mets are faring.

Despite all the injuries this team has dealt with, somehow Manager Terry Collins‘ crew keeps finding ways to win. The Mets took the final two games of its three-game set against NL East leading Washington to pull back within 8.5 games of the Nats. New York is now 7-3 over the last 10 games and 11-4 over the last 15 to soar back into second place in the division, three games up on the scuffling Marlins.

That’s a simply amazing feat when you consider how much this team has had to overcome, including season-ending injuries to stars David Wright, Lucas Duda and Matt Harvey. Zack Wheeler? Never made it back from Tommy John surgery. You can add Steven Matz, Neil Walker (also done for the season) and Jacob deGrom to the list of key players currently M.I.A.

If the Mets can secure another playoff spot, Collins — who has apparently resorted to prayer to keep his team afloat (see video below) — deserves some serious kudos.

After a nice bounce back season last year, Curtis Granderson has regressed in 2016. However, he smacked a two-run homer Sunday as part of a three-RBI day, giving him five ribbies in the last two games. Granderson had a solid June, but it’s been all downhill since then, leaving him widely available on your waiver wire. Let’s hope this weekend is a sign he’s set for a strong finish to salvage his season as he’s been losing PT, which has hurt his counting cats.

How about starter Robert Gsellman? He did a much better job of limiting damage on Saturday in his second career start, holding Washington to a run on six hits over six innings to get the win. The Mets sure know how to churn out the pitching prospects, but this kid has really flown under the radar previously. Gsellman is definitely worth considering in NL-only leagues and performances like this — and what the Mets are getting from Seth Lugo (whom we recommended as a waiver wire pickup on Sunday) — have really helped prop up a rotation decimated by health issues.

Duda, by the way, is now hitting soft toss and will soon engage in full batting practice, so there’s actually a chance he returns before the end of the season. We expected him back at some point when we slotted him into the top 40 of our First Base Rankings, released in early July. Clearly bothered by his back, Duda was not hitting as well this year, and you really saw it in his decline in extra-base pop. He’s a potential 35-homer bat when healthy, something he’s had trouble doing.

Harvey, of course, never looked worse before undergoing surgery to deal with thoracic outlet syndrome. His walk rate was up substantially and, as the losses piled up, his Fantasy owners got more and more panicky over their ace until his season was finally put out its misery. Will Harvey look more like his 2013 and 2015 incarnations next year, or will it be more of what we saw this season?

Yoenis Cespedes has dealt with a quad issue in recent weeks that sent him to the DL and continues to dog him now that he’s been activated (he’s sitting Monday). He still managed hits in the last two games and he was red hot while active in August (1080 OPS). Cespedes was a different player as soon as he arrived in New York at the trade deadline last year, and he’s continued that impressive play into 2016, flashing tremendous extra-base power and vastly better on-base skills.

The loss of Walker (back surgery) really stings. He was enjoying a productive debut season with the Mets, in the midst of probably his best campaign yet. It’ll be interesting to see if New York offers the pending free agent a qualifying offer and makes an effort to sign him long-term. If you owned Walker and are struggling to replace him, we’d recommend scooping Yoan Moncada off the wire, if he’s available. Failing that, try Joe Panik or Jose Peraza.

Now it’s your turn. Let us know in the comments below what your expectations are of the Mets down the stretch.

By RotoRob
Tags: Neil Walker, New York Mets
This entry was posted on Monday, September 5th, 2016 at 3:40 pm and is filed under BASEBALL, RotoRob, Team report. You can follow any responses to this entry through the RSS 2.0 feed. Both comments and pings are currently closed.