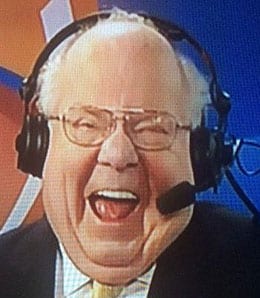 Last week, the Sports Broadcasting Hall of Fame Class of 2016 was unveiled, and sadly, we are still shut out of the honour. Making the grade this year are: Verne Lundquist, who will call college football games for the final time this year; MLB analyst Tim McCarver; Robin Roberts, the former anchor of ESPN SportsCenter; crazy suit wearing TNT sideline reporter Craig Sager; Sean McManus, the CBS Sports chief; and Fox producer Bill Webb.

There wasn’t a ton of MLB action on Thursday, but a few items bubbled to the surface for us…

When we slotted Freddie Freeman in the top 10 in our First Base Rankings in early July, we bemoaned his lack of productivity. Well, with the Braves offense really kicking into gear lately, that’s certainly changed. Freeman cranked a two-run dinger (see video below) and had a bases-loaded walk on Thursday, giving him seven RBI over the last four games. He’s hit safely in eight straight and is drawing plenty of walks, too, with four over the three-game sweep of the Padres — Atlanta’s first home sweep all season. Freeman had an amazing August with nine homers, 24 RBI and a .313/.460/.688 slash line, and he’s clearly not cooling off now that the calendar has flipped. In a lost season for the Braves, what has arguably been a career year for him really stands out.

Miami outfielder Christian Yelich hit just .270 in August, his worst month of the season. However, he looks ready to finish strong in what’s been a career year. After stroking three hits Thursday, Yelich is 6-for-11 over the last three games with four runs, three homers and seven RBI. He even swiped two bags Thursday to make his Fantasy owners extremely pleased. Yelich is healthy this year after missing 36 games in 2015, and that’s made all the difference as his counting cat numbers have bounced back and his BA just keeps rising. If his stolen base total hadn’t dropped so significantly, we’d be looking at one of top stars in all of Fantasy baseball here.

San Francisco SP Jeff Samardzija had been pretty hot lately, going 2-1 with a 1.75 ERA over his last four starts. Then, he ran into his former team, the Cubs. Samardzija lasted just four innings Thursday, giving up five hits, three walks and three earned runs. The good news is that awful stretch over June and July seems to be over and he’s back to his early season form. The durable Samardzija will likely top 200 innings for the fourth straight year and this has certainly been a better campaign than the one spent with the ChiSox in 2015. However, he’s still nowhere near the pitcher he was at the end of his tenure with the Cubs.

Now it’s your turn. Let us know in the comments below how you think Freddie Freeman will do in September.

By RotoRob
Tags: Freddie Freeman, MLB
This entry was posted on Friday, September 2nd, 2016 at 6:08 pm and is filed under BASEBALL, MLB Today, RotoRob, Sports broadcasting. You can follow any responses to this entry through the RSS 2.0 feed. Both comments and pings are currently closed.