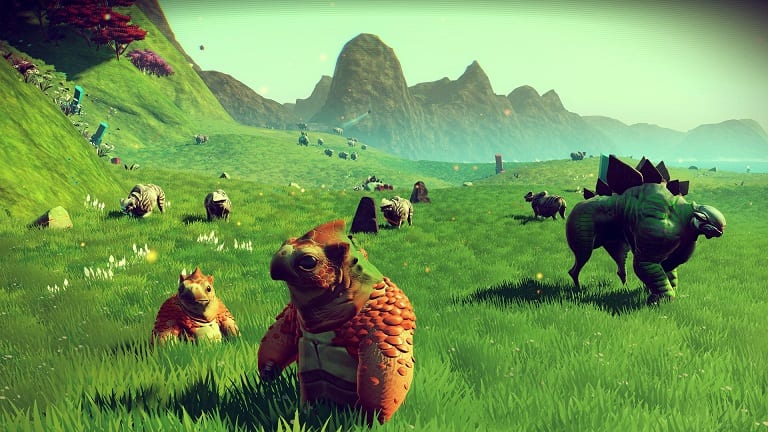 Bruh, like, got dat Grah? Y’all don’t got no Grah?

“Man cannot discover new oceans unless he has the courage to lose sight of the shore.” – Andre Gide

That quote, contained within the game itself, perfectly summarizes the breadth of the project that is No Man’s Sky. From the creative minds behind the Joe Danger franchise comes an indescribably large galaxy to explore, filled with procedurally generated planets, creatures, ships and more. But what does one actually do?

There are two separate control schemes at play: walking and flying. While traversing a planet’s surface you can scan the area to highlight points of interest. You can also sprint by clicking the right stick, which is the first time we’ve seen a first-person game use that setup. It’s very weird at first, but it’s rarely necessary to sprint so it’s easy to adjust.

Pressing/holding “X” activates your invaluable jetpack, which you’ll use more often than your mining laser (right trigger). If you see a creature/plant that you’d like to scan, simply pull the left trigger and aim at it, and a short process will commence that provides details on that particular discovery.

If you have the technology installed on your Multi-Tool, you can switch between a mining beam and a Boltcaster (think space machinegun), and then also launch Plasma Grenades. Dispatching aggressive creatures feels a bit wonky, though, as the dead zone of the right stick is too high. It’s simply too easy to madly swing your blaster past what you’re attempting to aim at.

In flight, the controls are more limited but still comfortable and effective. You can switch between Photon Cannons and a Phase Beam, the former for ship-to-ship combat and the latter for space mining.

Your throttle is governed by the triggers, while pressing and holding Circle will give your ship a considerable speed boost. Even with that speed boost, you have to consider just how immense space is, so luckily you can craft a Pulse Engine, activated by pressing L1 and R1 together for a few seconds.

No Man’s Sky is unquestionably filled with gorgeous visuals despite a few noticeable issues. Each planet you visit is different, even if those differences are minor, and each may contain flora and fauna. Textures aren’t the most detailed, but they’re not as bad as some suggested.

While creatures are procedurally generated as well, they’re based on a number of familiar templates. For example, you’ll see a crab-like creature on one planet that has long stalks with beads for eyes. On another you’ll see a crab creature with longer claws and a different pattern on the shell.

Every planet’s landscape is unique, with some producing gigantic plateaus covered in purple grass and rocks with mushrooms on them, and some consisting almost entirely of oceans and submerged caves filled with valuable resources and schools of sausage squids. And then you break atmosphere and truly absorb the scope of No Man’s Sky.

Most of the game is aurally lonely with very little chit-chat. Sometimes an alien might spout a few quick words, but nothing of note. Planet-side noise is usually just ambient creature sounds (even sometimes on planets with no creatures) and occasional weather effects.

A wonderful soundtrack fills the gaps perfectly, though. Orchestrated by a group called 65daysofstatic, it too can be considered procedural. There are several pieces of music, all with their own unique triggers that can be combined and shifted in an almost infinite number of ways.

Early in No Man’s Sky you’ll be directed toward an entity called the Atlas. This will keep pushing you along a short story-driven path, but the real objective is impossible to discern initially. However, there’s a wonderful “language” mechanic at play. In any system you might run into one of three races: the Korvax, Gek or Vy’Keen.

Each race has its own unique language that can only be translated by exploring planets and finding ruins or objects called Knowledge Stones. Exploring the various ruins and monoliths also acts as the delivery mechanic for the story, so if you wish to truly grasp this universe you best start searching planets.

As your search you’ll notice that your life support, weapons, environmental protection and basically every item that’d be considered a “tool” is in constant need of recharge. For example, it’s not uncommon to drain your mining laser, open your inventory, recharge it, mine for a few more minutes and then need to recharge your life support systems.

From there you might recharge your life support systems and continue mining only for your environmental protection to need more juice because this planet’s acid rain is brutal. There’s also a constant need to maintain your ship’s components, so much of your time is spent in menus or mining for resources.

Constant menu juggling gets strenuous after a while and is counter-intuitive to the game’s exploration emphasis, but you’ll find that if you properly prepare and upgrade technology as you go, you’ll spend less time in the menu.

Unfortunately, space combat is a letdown. Not because it isn’t fun, but because it has very little impact on the game. You might be cruising around with valuable resources in tow and receive a hostile scan. After the pirates warp in, they immediately open fire and continue to battle until you destroy them… or succumb to poor shield management.

In the midst of battle against multiple ships should we really have to open a menu, tab over, select our shields and then select what resource we want to use for charging? Why not let us bind one of the unused buttons to charge them mid-battle rather than taking us completely away from the situation?

Not all fights are directed at you, though, as sometimes you’ll receive distress calls from a freighter and have the option to help them fight off pirates or join the attack and take their loot. Once the fight is over, it’s over, no words are exchanged, and people just fly away.

No Man’s Sky is a unique game with wonderful exploration elements that promises more features down the road with frequent patches and free DLC. Creating a universe is hard. Getting one to work right even more so, but No Man’s Sky literally contains an infinite experience that’s impossible to fully explore.

By Jeff Cater
Tags: Hello Games, No Man's Sky, PlayStation 4, Sony, Video Game Review
This entry was posted on Friday, September 2nd, 2016 at 2:39 am and is filed under Jeff Cater, Video Game Reviews. You can follow any responses to this entry through the RSS 2.0 feed. Both comments and pings are currently closed.