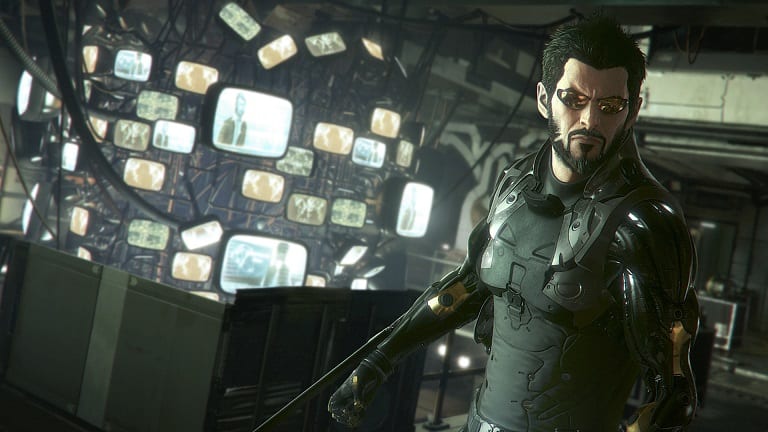 Never **** with a man that has blades attached to his arms.

If we made a top 10 list for last generation, Deus Ex: Human Revolution almost certainly would’ve found a spot. It blended action and story as well as any shooter and created a world that offered legitimate options for most scenarios. Now, some five years later, Adam Jensen has returned in Deus Ex: Mankind Divided, a true sequel that looks to harness the added power afforded by current consoles while still retaining the gameplay mix that made it special.

As with the series’ previous entry, Mankind Divided primarily takes place as a first-person experience, though entering cover switches your view to third person. It’s a crisp, refined system with options to fire your weapon, execute melee takedowns, toss grenades and activate augmented powers. The only in-action issue we encountered was that it can be a bit finicky to interact with items in the environment, even when you’re looking right at them.

If anything, the game makes picking off enemies from cover too easy. Lining up head shots using the reticule can be done at almost any range — even those at long distance can be targeted by simply making slight adjustments until the reticule turns red. They’re not always one-shot kills, but odds are if you can get into cover you can handle most of the standard enemies.

It actually creates a marked difference between first- and third-person combat, with the former being much less forgiving. It also feels counterintuitive that the enemy’s best means of defeating you when you’re in cover is rushing since their own efforts to take cover are rendered nearly useless by the easy headshots. Still, it’s enjoyable to play and makes you feel like a highly trained operative.

While not on par with some of next-gen’s true graphical powerhouses, Mankind Divided succeeds in the most vital areas: world building, consistency and variety. It’s a more tightly focused experience than its predecessor with the majority of the game taking place in Prague, however, the city never starts to feel stale or repetitive.

Most of the character models look good, but some of the NPCs with smaller roles appear to have had corners cut with limited animation and mouths that don’t match the words. You’ll also pay for being able to seamlessly explore sections of the city via lengthy load times each time you change areas or reload a saved game.

Audio effects that have impact and a quality soundtrack join consistently strong voice acting to create a really excellent soundscape. Elias Toufexis returns to ably bring Jensen to life, balancing the concern, menace and arrogance afforded by his status as a legit badass that still wants to do right by people.

Two years have passed since the events of Human Revolution, and the world has changed dramatically in the wake of the “incident,” where augs lost control in lethal fashion. Now augs are hated and feared, relegated to second-class citizens. After a short prologue in Dubai, Jensen, now a member of Interpol’s Task Force 29 anti-terrorism unit, is dispatched to investigate a Prague bombing.

As noted, Mankind Divided foregoes the globetrotting ways of its predecessor and tells a much more intimate story with Adam looking into the forces moving behind the scenes that are deteriorating relations between augs and naturals. There are still twists and turns, but it doesn’t try to cover nearly as much ground — physically or narratively — as Human Revolution.

What hasn’t changed is the series’ knack for character development, ability to layer storylines and offer lots of content that feels fleshed out as opposed to mindless interchangeable fetch quests that are only there to extend the length. Side missions deepen the fiction and provide different experiences, such as infiltration, investigation and so on, which make them well worth playing.

Mankind Divided also excels in offering viable alternatives to nearly every scenario. One aspect of this is character building through augmentation. There are too many skill tries to unlock them all, so the game allows you to tailor Jensen to your play style.

While that’s not uncommon, the way Deus Ex does it is particularly shrewd because no matter how you evolve you never close off your options. For instance, if one path is blocked by noxious gas and you don’t have the breather aug, there’s bound to be another way to reach your destination. Or if you elect not to invest in hacking, multi-tools can be constructed to open locks.

Completing objectives can also be accomplished in multiple ways. You can go in armour activated and guns blazing or you can stick to the shadows and eliminate enemies in non-lethal fashion. Even the endgame of many missions is up to you. A newspaper is digging into TF29 — do you warn them off, give them a better story or just take them out? It’s up to you.

For everything that Human Revolution does right, its inconsistent A.I. sticks out. Enemies can be clueless, ignorant of your presence or foolishly marching into choke points where many have died already. They can also be hypersensitive, however, with one enemy briefly seeing you leading to a swarm of foes that are suddenly able to root you out with deadly precision.

There are two additional modes as well: Breach and Jensen’s Stories. The former features arcade-like gameplay in a VR world in which you’re trying to collect Data Towers. It’s okay, but lags well behind the campaign and is a nesting ground for micro-transactions. The latter is (or will be) a series of standalone DLC missions, the first of which, Desperate Measures, feels like it was pulled out of the main game to dangle as a pre-order carrot.

Much like its predecessor, Deus Ex: Mankind Divided is a wonderful game replete with loads of missions, options and a world that begs to be explored. It’s one of the best 2016 has to offer.

By HC Green
Tags: Deus Ex, Mankind Divided, Square Enix, Video Game Reviews
This entry was posted on Wednesday, August 31st, 2016 at 1:12 am and is filed under Herija Green, Video Game Reviews. You can follow any responses to this entry through the RSS 2.0 feed. Both comments and pings are currently closed.