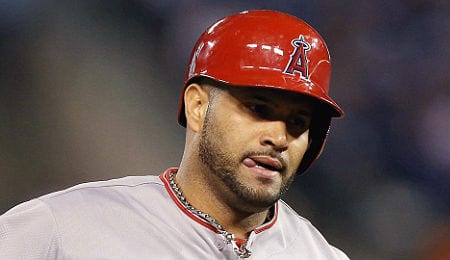 A couple of weeks ago, we examined the brilliant career that Adrian Beltre is putting together. Today, we’ll take a closer look at his AL West rival and another sure fire Hall of Famer who has lived under a much bigger spotlight — Angels first baseman Albert Pujols.

On Monday, Pujols reached yet another milestone, smacking his 586th career dinger to move into a tie for ninth place all-time with Frank Robinson (see video below). Assuming Pujols plays on in 2017, we’ll have to wait until next year for him to reach his next target — Sammy Sosa (609).

So now presents a good opportunity to not only see what Pujols has done this season, but where he’s shaping up among the all-time greats.

In reaching 1,800 career ribbies in 16 seasons, Pujols has joined an even more exclusive club, as the only two players to drive in more runs in that many seasons are Jimmie Foxx and A-Rod.

A 13th round pick in 1999, Pujols has always been a superb contact hitter, although his strikeout rate is up this season. Still, with just 1,042 career whiffs in 10,450 career at-bats, no one would ever confuse him with, say, Rob Deer.

Pujols has now risen to 85th in career games, and in a couple of days, he’ll likely tie Mike Schmidt and Sam Rice on that list.

With 9,040 career at-bats, Pujols checks in at 71st all-time. Next up is Al Oliver, just nine at-bats ahead of him.

Pujols now has 1,656 career runs, putting him inside the top 35 all-time. He’s just a half dozen back of Ken Griffey Jr., seven behind Rafael Palmeiro and 12 shy of tying Johnny Damon for 30th place.

Pujols has been a monster in doubles, currently in 16th place, just two shy of 600 for his career. No. 601 will tie him with Barry Bonds for 15th place.

Small wonder that he’s on a short list of the greatest right-handed hitters of his generation, with only Manny Ramirez and Frank Thomas having legitimate arguments to top Pujols in that regard.

While Pujols’ slow offensive regression has continued this season, right now he’s proving he remains a tremendous Fantasy asset. Monday marked his second straight two-hit game and he’s now hit safely in six straight and 12 of the last 13, raising his BA 14 points in the process.

Over the last week, Phat Albert is scorching to the tune of a .414 mark with three dingers, a double, five runs and seven ribbies, helping shake off what had been a sluggish August early on.

He’s been a lot more durable the past three years and he’s been hitting better this season, at least for average. Pujols’ extra-base sock has regressed, but his walk rate has bounced back somewhat. With over a month to go, he’s almost guaranteed to shatter his previous season high in RBI as an Angel. Clearly, Pujols is not ready for a rocking chair.

Now it’s your turn. Let us know in the comments below where you see Pujols winding up among the all-time greats.

By RotoRob
Tags: Albert Pujols, Los Angeles Angels
This entry was posted on Tuesday, August 30th, 2016 at 3:26 pm and is filed under BASEBALL, Player profile, RotoRob. You can follow any responses to this entry through the RSS 2.0 feed. Both comments and pings are currently closed.