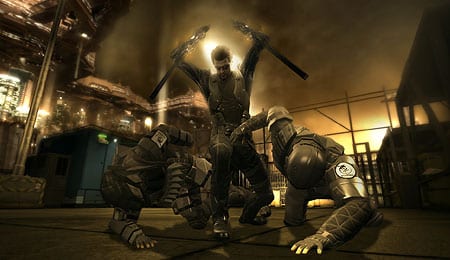 It’s not going to end well for the gents on the ground.

Unquestionably more and more first- and third-person shooters are trending toward forgettable storylines with the primary focus being multiplayer. In that climate it takes a set of stones to release a title that not only relies heavily on features like character and plot development, but also completely foregoes a multiplayer component. Enter Eidos Montreal and Square-Enix’s Deus Ex: Human Revolution, a game that unapologetically challenges you to tackle a hybrid shooter/RPG that’s far beyond a series of point-and-shoot set pieces.

Although the majority of the game takes place from a first-person perspective, you switch into a third-person view whenever you enter cover (left shoulder button). The transition is slick and responsive, which is important since it represents such a critical gameplay element. You can easily pop out of cover to fire rounds (right trigger) though aiming down sight is done by clicking in the right analog stick, which is never my favourite method.

It’s a good setup overall, but I did not care for the game’s radial menu. You use it to quickly switch your primary (guns) and secondary (grenades/mines) weapons, which works fine. However, you can also select consumable items by simply rotating the stick over them. By the time I realized I was selecting and using them by accidentally over-rotating my left-most gun, I was easily 20-plus hours into the game and had wasted an untold number of healing objects.

Human Revolution is an excellent looking game with a carefully crafted near-future world that deftly blends futuristic looking technology with present day urban squalor. Yes, it’s the future, but there remains the clear divide of the “haves” and “have nots” with towering state-of-the-art structures juxtaposed with rundown slums. The whole thing, as seen through the eyes of your cybernetically enhanced character, has a golden glow about it that’s reminiscent of Halo 3: ODST.

Beyond the environments, there are also slick looking advanced models of contemporary weaponry as well as some more futuristic looking armaments. Characters display facial emotion and the cut scenes look great. Some of the unnamed NPCs don’t get the same first-class treatment as those with roles to play, but that’s a minor complaint.

While it cannot match the sustained top-to-bottom vocal excellence of Mass Effect, Deus-Ex: Human Revolution still features strong performances from nearly all of the significant characters. In particular, Adam Jensen’s gravelly voice is perfect for the game’s augmented hero. All of the weapons and explosions pack a suitable punch, and the soundtrack is outstanding.

Set in 2027, Deus Ex: Human Revolution casts you in the role of Adam Jensen, the head of security for Sarif Industries. With the cybernetic giant seemingly on the verge of a seminal scientific breakthrough, a team of unknown assailants strike, mortally wounding you in the process. Luckily, Sarif has the technology to rebuild you (better… stronger… faster), and you return to work approximately six months later in all your technologically enhanced glory.

From there you set out to discover what really happened that night. Without giving anything away let’s just say the story takes some interesting twists and turns with a ton of optional detail work woven into the plot through exploring the environments. Impatient gamers could certainly choose to bypass things like hacking into e-mail accounts to flesh out the story, but you’re doing yourself a disservice. In fact, one of the major reasons it took me so long to render a review was because I was intent on reading and discovering everything I could along the way.

In addition to a lengthy main story, there are also more than a dozen side quests available. And while most of them are largely tangential to the plot, none of them come across as tacked on or superfluous. They’re well thought out, interesting and do a nice job of extending the game’s lifespan while still adding layers to the overall feel.

Although I classified Human Revolution as a shooter in the introduction that’s an oversimplification of the game as one of its primary strengths is the presentation of legitimate choices when it comes to handling situations throughout the game. Nearly every encounter can be approached multiple ways based on how you’ve branched out your augmentations — one example would be a wall that can be busted down that gains access to the same room as a door than can be hacked. Two divergent approaches reaching the same end point.

That’s a highly straightforward example, however, with the game offering up split paths throughout its entirety. You can go in guns blazing and not give a second thought to tripping alarms and mowing down your enemies. Conversely, you can use a stealthy approach and not fire a single round… or anything in between. By offering multiple methods of achieving the same result, Deus Ex presents gamers not just with a uniquely tailored experience, but also incentive to go through again and solve situations in a different manner.

Making that an even more attractive proposition is how well implemented both the shooting and stealth approaches are. Had one been clunky or less fun than another, gamers may have felt pigeonholed into playing a certain way, but that’s not the case here. I considered myself a bad ass secret agent type, unleashing melee attacks and silenced pistol shots aplenty, and had a blast that way. And those times I decided to go balls out shooting? They were fun, too.

Speaking of being a bad ass, Human Revolution does a largely superb job of straddling the line between having Jensen being legitimately tougher than his enemies and making him a glorified Master Chief. So while his augmentations do afford him some protection (not to mention some sweet blades), he can’t stand out in the open and trade fire with multiple foes. He’s tough, not invincible.

That’s where the game’s tactical aspects come into play as enemies are rarely content to sit back and let you pick them off at your leisure. Instead they’ll stick to cover, attempt to outflank you and generally make life miserable when they’ve got you outnumbered. You are able to execute unblockable takedowns (both lethal and non-lethal) to get out of tight situations, but each deployment uses one of your energy bars. You can have up to five when you’re maxed out, though that’s deceiving since only the last one regenerates on its own. Plus, many of your other augmentations run on the same juice, which forces you to think strategically rather than rushing in and meleeing everyone.

Role-playing game elements are also implemented. Each task you perform successfully, from completing objectives to finding hidden rooms to taking down enemies with a head shot, will net you experience points. You don’t technically level up; instead you earn Praxis kits that allow you to unlock additional augmentations from a lengthy list of options — such as additional armour, faster/longer sprinting, a cloaking device, seeing through walls and more.

Regrettably, the game skews toward certain upgrades (hacking, jumping, zero fall damage) regardless of how you choose to play. Plus, some of the coolest enhancements — like a defensive system that launches explosives from your suit and a tandem melee attack that features some brutal looking knockouts and kills — aren’t usable outside of a handful of situations throughout.

There are also uneven moments with the game’s A.I., which occur not only during standard gameplay but also the boss battles. One boss stood in front of a wall and fired at me while I was in cover, allowing me to pop out in between shots and whittle his health down to nothing from a safe range. Not exactly the epic showdown the designers were looking for.

Deus Ex: Human Revolution took a while for me to review because, quite frankly, I didn’t want to miss anything as I played through it. It’s expertly crafted both in story and gameplay, and it is well worth the time investment necessary to explore the game properly.

By Herija Green
This entry was posted on Thursday, September 15th, 2011 at 10:55 am and is filed under Herija Green, Video Game Reviews. You can follow any responses to this entry through the RSS 2.0 feed. You can leave a response, or trackback from your own site.