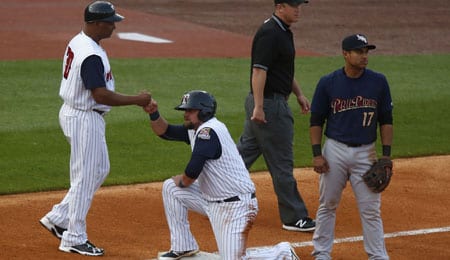 Donovan Solano (right) is tearing up Triple-A, but likely won’t get a September call-up. (Blade/Lori King)

Remember Donovan Solano? After a solid rookie season in 2012, he became the Marlins’ primary second baseman in 2013 and 2014 before his offensive ineptitude led him to a bench role last season.

Now in the Yankee organization, Solano is hitting up a storm in Triple-A (.312/.341/.424 with 65 RBI in 126 games). He’s failed to get a sniff in the bigs so far in 2016, but with a .410 mark over the last 10 games, he deserves consideration as a September call-up. He’s flashed some pop from time to time (see video below), but the only problem is Solano isn’t even on the 40-man roster, so he’s unlikely to be rewarded for such a fine season.

By the way, Baseball-Reference.com lists Solano as the player most similar to 1930s infielder Neal Finn (not to be confused with Neil Finn of Split Enz and Crowded House fame). This Finn spent three years with the Brooklyn Robins/Dodgers and one with the Phillies before an ulcer ended his career and, ultimately, his life. He was a pretty damn good defensive second baseman — hence the similarity to Solano.

Baltimore catcher Matt Wieters is struggling through the worst season of his career, but based on his play in August, you might want to give him a second look if you need help behind the plate. He smacked a huge two-run homer Tuesday that provided the difference as the O’s beat the Jays, giving him a .253/.287/.434 slash line for the month. That may not seem fantastic, but compared to the nightmare that was July for Wieters (.117/.194/.133), it qualifies as blazing. The fifth overall pick in the 2007 draft has shown power and the ability to hit for average, but has never really put it all together in any one season — while managing to stay off the DL, that is. Wieters has been healthier this season, so his counting cat numbers are better, but he’s really struggled to get on base. A big finish would be just what the doctor ordered and it’s worth scooping him up to see if it’ll happen — especially since he’s never been so widely available on the wire.

Still on the theme of catchers we’ve been waiting to put everything together, Washington’s Wilson Ramos sure has broken through this season. He’s hit safely in four straight games, driving in three runs to reach 70 for the first time in his career. Of course, Ramos has enjoyed a lot of firsts this year — 20 homers, 50 runs, 125 hits, a BA over .300 — so you can just add it to the list. He’s actually cooled off after a ridiculously good first half, and despite his recent production, August has been his worst month of the season. But Ramos’ overall power and production have made him a Fantasy darling this year, and it’s great to see the recently turned 29-year-old Venezuelan finally achieve his potential.

To wrap up our look at catchers, a dude that’s received no Fantasy love at all is Tampa Bay’s Luke Maile, but he spanked a huge homer Tuesday and has now hit safely in four straight and seven of his last eight games. Better yet, he’s seeing more action (a .545 BA over the last week will buy you PT) and has been red hot all month, batting .295 with an 826 OPS in August. Maile saw a bit of action last year, but is hitting much better in his second taste of the majors, while showing more extra-base sock. He’s never really been viewed as much of a prospect, but he wouldn’t be the first kid to grab his opportunity and run with it, so give him a look in deep AL-only leagues if you need catching help.

Now it’s your turn. Let us know in the comments below what you’re expecting out of Matt Wieters down the stretch.

By RotoRob
Tags: MLB
This entry was posted on Wednesday, August 31st, 2016 at 5:36 pm and is filed under BASEBALL, MLB Today, RotoRob. You can follow any responses to this entry through the RSS 2.0 feed. Both comments and pings are currently closed.