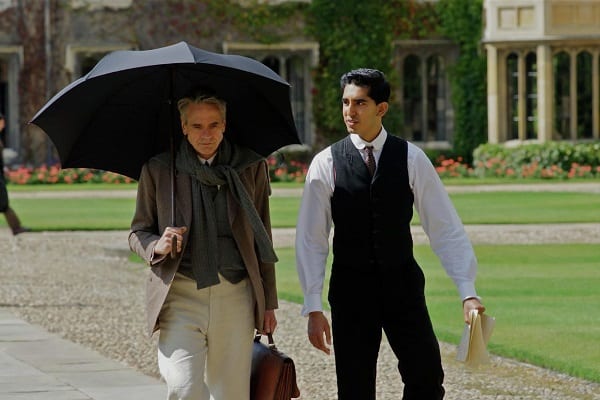 Based on the book of the same name, The Man Who Knew Infinity centres on the life of Srinivasa Ramanujan, an Indian mathematician that created many important theorems without benefit of formal education on the subject. Now let’s see if a film deeply rooted in mathematical minutia can add up to an interesting viewing experience.

Srinivasa Ramanujan (Dev Patel; Slumdog Millionaire) is a mathematical genius living in poverty because the British aristocracy in India believes he can’t be a valuable employee due to a lack of formal education. Eventually, he lands a position under Sir Francis Spring, who facilitates an introduction between Ramanujan and G.H. Hardy (Jeremy Irons), a professor at Cambridge University.

Upon receiving the letter and accompanying equations, Hardy extends an invitation to Ramanujan to come to the campus and have his work published. After accepting the invite and arriving in Cambridge, Ramanujan and Hardy routinely clash over the former’s work with Hardy wanting extensive proofs before publishing and Ramanujan simply wanting to get his formulas circulating.

Their relationship is strained due to the differing opinions on publication, as well as Hardy’s prickly personality that tends to rub many people the wrong way. However, they share an unquestioned love for mathematics, along with an understanding of the importance of Ramanujan’s work, but now they must persevere with the onset of World War I.

While by no means an exciting topic, The Man Who Knew Infinity tells a reasonably interesting story about the coming together of Ramanujan and Hardy. That it takes place in a time period you don’t often see in film helps as well, though the scenes in which World War I intrudes on academic life feel a little bit forced (i.e., the jealous student beat down).

When we say this isn’t an exciting topic, we mean this isn’t an exciting topic. Although the film tries to make it about the passion and the wonder of discovery, it’s still ultimately rooted in mathematics and can be rather dull. Making matters worse, the film’s attempts to add conflict — Ramanujan with one of the professors, a London bombing, etc. — don’t really work.

Outside of the main two actors, the only performance that rises above passable is Toby Jones as Hardy’s confidant that ends up getting called into action in the war. Everyone else seems to be a collection of tired archetypes, such as the crusty dean, the pompous professor insulted by Ramanujan’s presence and lack of formal education, the controlling mother, the doting wife, and so on.

Despite taking place on two continents, The Man Who Knew Infinity still feels small in a limited-budget sort of way. There’s no real exploration of London or Ramanujan’s home in India, and the addition of the bombing scene in which a woman is killed yet no explosions are present really stood out. It was like adding action without actually adding action.

The Man Who Knew Infinity can feel a bit ponderous even while wrapping up in around 100 minutes, and only those with historical or mathematical interests are likely to find it worthwhile.

By HC Green
Tags: Blu-ray reviews, Dev Patel, Jeremy Irons, The Man Who Knew Infinity
This entry was posted on Thursday, September 1st, 2016 at 5:39 pm and is filed under Herija Green, Movie Reviews. You can follow any responses to this entry through the RSS 2.0 feed. Both comments and pings are currently closed.