The Wire Troll: Chris Colabello on a Roll 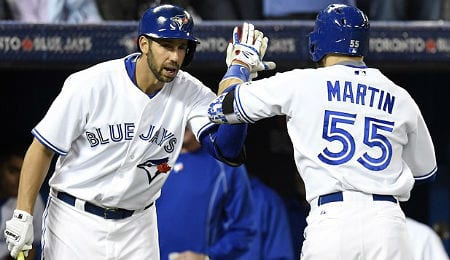 Another week, another batch of fresh faces that could help your Fantasy team in a pinch. Here are this week’s Fantasy baseball waiver wire recommendations.

Chris Colabello, 1B/OF, Toronto Blue Jays (ESPN: 0.7 per cent owned; CBS: 3 per cent): Remember what a crazy hot start Colabello had last year for the Twins before he disappeared in May? He seems to have perfected that, tearing things up early for the Blue Jays in the run production department and recording his first career four-hit game along the way (see video below). Colabello figures to keep getting consistent at-bats at this rate.

Peter Bourjos, OF, St. Louis Cardinals (ESPN: 0.3 per cent owned; CBS: 1 per cent): Bourjos is deserving of more playing time given his speed and defensive abilities, and he’s been taking advantage of his recent chances, especially with Randal Grichuk still on the shelf. Bourjos already has three multi-hit games this month and can get you stolen bases too, even if he’s not starting every day.

Chase Whitley, SP, New York Yankees (ESPN: 19 per cent; CBS: 26 per cent): Whitley is vying for Masahiro Tanaka’s rotation spot and has been doing a pretty solid job so far. Whitley finally gave up some long balls on Saturday, but came into that start with an ERA under one.

Carlos Peguero, LF, Texas Rangers (ESPN: 0.2 per cent; CBS: 3 per cent): Peguero is worth a look after he drilled three home runs in two games against Houston, as the Rangers have finally showed some life in 2015. Just remember that Josh Hamilton will soon be joining the Rangers.

Danny Espinosa, 2B, Washington Nationals (ESPN: 0.5 per cent; CBS: 6 per cent): Gone is Espinosa’s epic ’70s-cop-type facial hair, but his power may be slowly returning, as he launched a pair of bombs Friday against Atlanta. He had 21 homers in 2011 and has socked four this year.

Jose Pirela, 2B/SS, New York Yankees (ESPN: 0.4 per cent; CBS: 3 per cent): Pirela picked up a pair of hits in Toronto and two more Saturday against Baltimore and the Yankees are looking for more production from their middle infielders, so he could get a few extra looks in an otherwise deep New York lineup.

Michael Lorenzen, SP, Cincinnati Reds (ESPN: 4.8 per cent; CBS: 10 per cent): Lorenzen had a decent first start before busting out with a stellar performance on Tuesday against Pittsburgh. Homer Bailey is done for the year so Lorenzen is the first youngster to get an extended look as his replacement.

Will Venable, OF, San Diego Padres (ESPN: unowned; CBS: 2 per cent): It’s hard to believe Venable is completely unowned in the ESPN universe. It isn’t easy for him to get playing time but when he does, he can have games like Friday, when he came up a double shy of the cycle.

J.J. Hardy, SS, Baltimore Orioles (ESPN: 9.6 per cent; CBS: 45 per cent): Hardy came off the disabled list and made his season debut Thursday and is starting to show signs of life, recording two hits including a solo homer on Sunday.

Coco Crisp, OF, Oakland Athletics (ESPN: 21.4 per cent; CBS: 20 per cent): Crisp (right elbow surgery) is another veteran that came off the DL last week, so scoop him up now while you can.

By Michael Seff
Tags: Chris Colabello, Fantasy Baseball, Minnesota Twins, Toronto Blue Jays
This entry was posted on Sunday, May 10th, 2015 at 11:17 pm and is filed under BASEBALL, Michael Seff, The Wire Troll. You can follow any responses to this entry through the RSS 2.0 feed. Both comments and pings are currently closed.