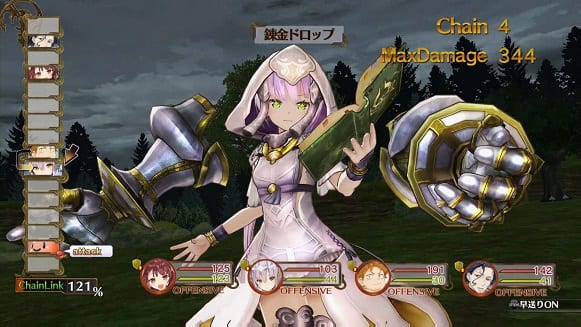 As the 17th installment of the Atelier series by Gust Co. Ltd., Atelier Sophie: The Alchemist of the Mysterious Book puts you into the shoes of Sophie. She’s a young alchemist out to prove herself, and with the help of a mystifying book named Plachta she’ll be on a unique ride in her quest for knowledge.

As with the standard set by previous entrants in the series, Atelier Sophie has easy, spot-on controls. While exploring the world map, you’ll guide Sophie around with the left stick. Interacting with characters, doors and other objects is done with “X,” which also serves to select or skip dialogue sequences.

Navigating the menus is an easy feat, as the inventory and character management screens have received a bit of fine tuning. You don’t really ever have to worry about inputs not triggering correctly or registering at all because of the deliberate combat system that is turn-based and generally clearly labeled.

Typically, the Atelier series has excelled visually when it comes to character design but featured pretty bland scenery and backgrounds. Unfortunately, the backgrounds in Atelier Sophie aren’t much better, though they do indeed feature more in the way of things like patches of grass, more detailed rocks and the like.

Where the game really excels is in character model design, which isn’t unusual for the series. Gust has always figured out unique ways to make breasts as prominent as possible, and Sophie is no different.

Bouncing of said breasts is much more apparent this time, too. Whether the flesh boulders are suppressed by a thin leather strap, or cooped up into a metallic corset, they’re definitely there. Heaving and jiggling.

Breasts aside (and up front, and behind you), the character design is actually quite wonderful; everyone’s outfit (revealing or not) is eye-catching and interesting — especially the character Oskar, whose tubby self has the absolute best taste in hats, ever.

The audio department is bloody fantastic as usual. Almost all of the dialogue in the game has a voice over and is delivered quite wonderfully, and the soundtrack swells and sweeps at all the right times to really bring a sense of wonder to the world around you.

As with most of these games, a fair amount of your time is spent sifting through dialogue and exploration. Your adventure will take Sophie to strange places, often in search of rare ingredients in order to make more powerful attacks and support spells to take into battle with you.

As you explore, you’ll inevitably run into creatures that need killing. Once you engage in battle, you’re presented with a look at your party and their individual skills. In battle you’ll select an ability of one character and confirm it, and then you’ll select the actions of the next character and so on down the line.

When each action has been confirmed, you’ll be prompted to end your turn and watch your decisions play out. You may also set Stances for your characters, too, which will help them either defend one another, themselves, or boost each other’s attack.

On the alchemy side of things, creating an item is done by combining various ingredients together in a puzzle game. You’ll select your ingredients, which are then placed in varying shapes on a grid. Arranging these shapes into the correct patterns is made easier by small hints in dialogue sequences, but it’s largely a trial-and-error process.

If you happen to arrange all of the ingredients perfectly, an item with additional bonuses will be the result, so there’s quite a bit of incentive to “git gud” at the crafting. You’ll also be able to tailor items to your companion Plachta, who (without giving too much away) is actually a transformation/manifestation of an old book that Sophie was once in possession of.

Let it be known that, as per series norm, there’s a ton of dialogue in the game. For example, it’s a solid 20 minutes or so before you see the opening credits. That could be a big problem for most people, but it’s unsurprising for fans of the Atelier series.

We already mentioned that the dialogue is all delivered extremely well, and the voice actors’ dedication to the characters and expressions makes the troves of dialogue much easier to digest than you might expect.

The world actually feels quite a bit more alive than past Atelier games because of a few new mechanics, like the passage of time and changing of weather. Certain ingredients might be easier to find at night, and some quests might only be available to you during a rainstorm.

It’s also a neat way to introduce more things to do without feeling too forced or repetitive, which was an issue that a few of the past games suffered from.

Atelier Sophie: The Alchemist of the Mysterious Book is certainly not for everyone, but it’s another strong entry in an old series with an established fan base. They won’t love it just because of its name, but rather because of the quality, time and dedication that developer Gust gives to its fans and projects.