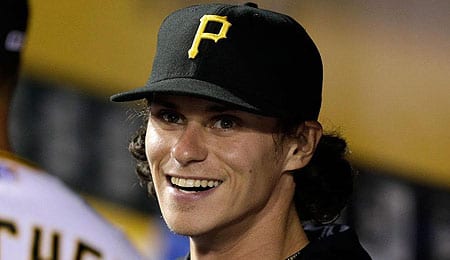 Jeff Locke hasn’t had much to smile about this year. (AP/File)

The Pittsburgh Pirates continue to flounder, falling 13.5 games back of the NL Central-leading Cubs and suddenly finding themselves just 6.5 games up on the fourth-place Brewers, so it’s no surprise that things are in flux in Steel City.

To wit, the Pirates have shaken up the rotation a tad, sending struggling starter Jeff Locke to the bullpen. Now that Ryan Vogelsong is healthy (see video below) and Ivan Nova was acquired, Pittsburgh has more options, leaving Locke as the odd man out.

That was the third straight start that Locke has surrendered five earned runs, so now any chance he has of equaling or passing the career high in IP he set last season is pretty much toast.

His ERA is at a career high, and other than May (3.98 ERA), he’s been consistently and progressively rancid (5.03 in April; 6.75 in June; 7.16 in July; and 10.38 for his lone August outing). Locke being removed from the rotation probably elicited plenty of applause among Pirate Nation.

He follows fellow deposed starter Juan Nicasio to the bullpen as the Pirates’ recent penchant for reclamation projects really missed the boat on that one.

Judging by his FIP, Locke hasn’t pitched quite as bad as his ERA would indicate, but the real issue here is his groundball rate is down significantly and that’s killing him. The homer rate is way up and his strikeout rate is way down, and that’s a deadly combination.

When Locke was at his best, he was benefiting from a lower than normal BABIP, but that trend has reversed itself the last two years to the point where his results are becoming unacceptable.

In 2013 and 2014 — and even to an extent in 2015 — he was a somewhat useful back of the rotation type, but clearly, that’s not the case this season. The emergence of Jameson Taillon as a consistent starter has rendered Locke even more expendable.

If for some reason, you’ve been rostering Locke in a very deep NL-only league, feel free to cut bait.

Now it’s your turn. If you owned Locke, let us know in the comments below what were you thinking.

By RotoRob
Tags: Chicago Cubs, Jeff Locke, Milwaukee Brewers, NL Central, Pittsburgh Pirates
This entry was posted on Tuesday, August 9th, 2016 at 1:42 pm and is filed under BASEBALL, Daily Dump, RotoRob. You can follow any responses to this entry through the RSS 2.0 feed. Both comments and pings are currently closed.