The Wire Troll: Scott Schebler Gets His Shot 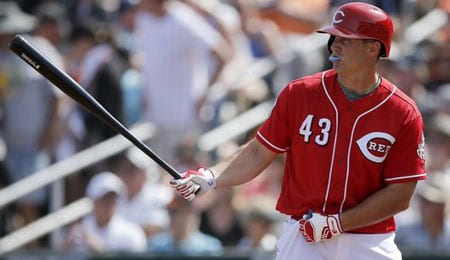 Scott Schebler is getting the job done since being recalled from Triple-A. (The Enquirer/Sam Greene)

Welcome back to another week of Fantasy baseball. We’re into August now, so if you’re in the running in your league, you can’t let your foot off the peddle. Take advantage of your league mates being distracted by the Olympics and raid your waiver wire!

This week, the A’s suspended their strength and conditioning coach after discovering he had hidden a camera in the team’s weight room (creepy!); Jorge Soler is back for the Cubs and wasted no time flexing his muscles; and 36-year-old Mark Teixeira, who is struggling to hit this year, has decided to pack it in after the season.

Scott Schebler, OF, Cincinnati Reds (ESPN: 1.7 per cent; CBS: 5 per cent): Schebler has been recalled now that Jay Bruce was finally dealt away from Cincy. Heading into the season, Schebler was expected to compete for playing time in LF with several other candidates, but was kind of lost in the shuffle thanks to the emergence of Adam Duvall as a legitimate power source. Still, Schebler has seen more PT than he did with the Dodgers, but he’s going to have to hit better to continue to see daily reps. He spanked a serious dinger — a walk-off shot, no less (see video below) — as part of a three-hit effort in his first game back, and has hits in three of four games since the trade, so is definitely worth a look in NL-only formats.

Josh Bell, 1B, Pittsburgh Pirates (ESPN: 4.7 per cent; CBS: 27 per cent): Yes, we’ve been ringing Josh’s Bell for some time now and we still can’t understand why he’s being denied a longer look in the bigs. Sure, since his brief recall, he’s struggled somewhat at Triple-A, but with multi-hit efforts in two of the last three games, he’s showing signs of moving past that. We still believe Bell makes for a perfect stash given the ability to rack up counting cats he’s shown at Triple-A. His time will come… soon, hopefully.

Nick Goody, RP, New York Yankees (ESPN: unowned; CBS: unowned): Goody has bounced back and forth between the Yankees and Triple-A this season, most recently being recalled last week. With a couple of key bullpen pieces moved at the deadline, there’s an opportunity for this youngster to carve out a more important role and the fact that he hasn’t been scored on since late-June is encouraging. Goody’s hit rates are solid, his strikeout rate is excellent and his command is superb. He still tends to get himself in trouble sometimes, but if he can limit those instances, there’s potential here, so at the very least key an eye on him in extremely deep AL-only leagues.

Pedro Alvarez, 1B/3B, Baltimore Orioles (ESPN: 13.5 per cent; CBS: 29 per cent): Alvarez is all about the power, and recently he’s reminding us what a Fantasy asset he can be, bashing five homers in the last three games and six over the last five. He’s not going to approach the counting cats he accumulated in Pittsburgh last year, but if you need some dingers down the stretch, you’d be wise to add him to your roster.

Cesar Hernandez, 2B, Philadelphia Phillies (ESPN: 9.1 per cent; CBS: 17 per cent): This Venezuelan infielder doesn’t tend to hit for power, but sure can help you with his speed. He’s hit safely in 11 of the last 13 games, building on what was a very fine July. Hernandez should top his run total from last year, and a few of his doubles have turned into triples or even the rare homer this season. He’s a very good on-base man, and if he was on a better offensive team, he’d be scoring a goodly amount of runs given his speed. Hernandez makes for a solid NL-only asset or perhaps a decent bench option in larger mixed formats.

Eddie Rosario, OF, Minnesota Twins (ESPN: 3.6 per cent; CBS: 11 per cent): Minnesota’s fourth rounder from 2010 has had his share of issues on the way to the bigs, but it’s clear from his production at Triple-A this season that he’s ready for prime time. Since the calendar turned to August, Rosario’s been on fire for the Twins, recording three multi-hit games in four tries with a double, two homers, six RBI, a walk and a steal. Suddenly, he’s taking PT away from Byron Buxton, so give Rosario a long look.

Matt Andriese, RP/SP, Tampa Bay Rays (ESPN: 17.4 per cent; CBS: 26 per cent): This righty racked up some impressive strikeout totals at Triple-A, and now that he’s moved back into the rotation for the Rays, he’s a hurler you must pick up immediately.

Alex Wilson, RP, Detroit Tigers (ESPN: 0.2 per cent; CBS: unowned): We slotted Wilson 91st in our Relief Pitcher Rankings heading into the season and although he hasn’t quite achieved our expectations based on a higher ERA and more walks, he’s still been a better source of holds — and that has value in certain formats.

Logan Ondrusek, RP, Baltimore Orioles (ESPN: unowned; CBS: unowned): The Reds cut this dude two years, off he went to Japan, and only now has he returned the bigs. So far, so good as Ondrusek has quickly worked his way into a setup role in B-More, making him worth tracking in very deep AL-only leagues.

Yulieski Gurriel, 3B, Houston Astros (ESPN: NA; CBS: 34 per cent): Three weeks ago, Houston signed a five-year, $47.5 million deal with Cuban infielder Gurriel, and he’s now working his way through the system. Based on the frequency of which he’s racking up total bases at High-A, his minor league apprenticeship will not be long.

By RotoRob
Tags: Cincinnati Reds, Scott Schebler
This entry was posted on Sunday, August 7th, 2016 at 4:16 pm and is filed under BASEBALL, RotoRob, The Wire Troll. You can follow any responses to this entry through the RSS 2.0 feed. Both comments and pings are currently closed.