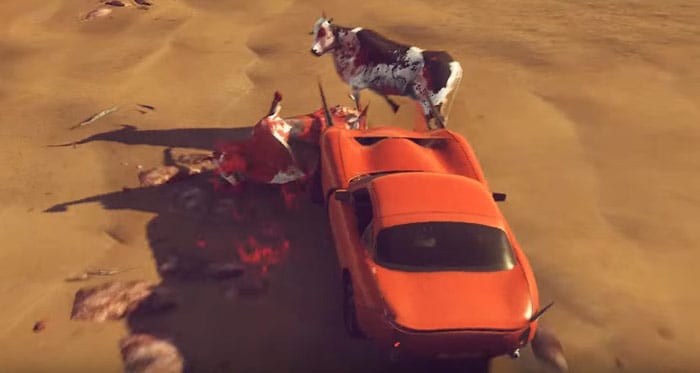 This is the highlight of the game.

Fast-forward to 2016 and we’ve just had Carmageddon: Max Damage arrive on consoles. Does this reincarnation do justice to Carmageddon’s lineage? Let’s fire up our engines and find out.

Wow! It’s been a long time since we’ve played a game that actively seems to fight user inputs. No matter what you’re doing, it seems like the car is resisting every step of the way. Yeah, the game controls mostly like any racing game you’ve played before, but for some reason turning seems to be an afterthought in design.

In fact, turning a car is a joke, as it feels like someone has slid dinner trays under the front wheels. You might have a pedestrian dead in front of you, waiting to get smeared, but there’s a hand-rail from a stairway in the way, so you tap the stick to avoid it but end up careening out of the way of the railing and the pedestrian just because the incredibly oversensitive controls.

Well, there are indeed graphics — graphic-y graphics at that! In short, it’s the best looking PlayStation 2 game available on the PlayStation 4. Pedestrians are laughably low-poly, textures are flat and lifeless, and all-around level design feels sloppy.

We wish there was more to say about this, but it’s just a poor looking game and there’s no other way to slice it. The frame-rate decides to take a nosedive at weird times as well, probably because your PS4 or Xbox One is trying to figure out what the hell this game from 2002 is doing on its hard drive.

On the audio front, the soundtrack is also nothing to write home about and is immediately forgettable.

Man, Carmageddon: Max Damage so closely approaches fun it’s sinful. How does one screw up a game about running people over and crashing others to death so badly? Sadly, the game feels like no one really gave a damn while making it.

Does anyone remember Bleem, the old PlayStation emulator for PC? Remember how no matter what you did, something just didn’t feel right while playing a game through it? Maybe some issues with the control translations?
Perhaps some proprietary tech features were used that my PC wasn’t ready for?

Well, the entirety of Max Damage feels like a poorly emulated game. As mentioned above, the controls are perpetually frustrating and feel like they’re constantly trying to spite you. Cars control like crap in the first place, but then add over-sensitive physics that send you flying off a two-inch curb and fields of grass that sap all friction from your tires on top of it.

Achieving victory in any of the six game modes you’ll come across in the campaign is never easy and rarely fun due to the wonky physics. The AI is atrocious as well as if they’re trying to kill you and manage to hit you, they don’t back up and try to ram you again. Instead, they simply keep pushing you until you slide off or get stuck (or they get stuck). It’s like having several people out there with the menacing task of gently pushing you out of the way.

Victory is generally achieved by wrecking your opponents’ cars, killing all of the pedestrians on the map or completing a number of checkpoints before your opponents do. The trouble about completing any of those objectives is that unfortunately none of them are very fun due to the game’s shoddy overall design.

With its poor graphics, almost no observable optimization and terrible controls, Carmageddon: Max Damage is a truly dismal representation of what can be done with Kickstarter funds.

By Jeff Cater
Tags: Carmageddon: Max Damage, Video Game Review
This entry was posted on Thursday, July 28th, 2016 at 2:23 am and is filed under Jeff Cater, Video Game Reviews. You can follow any responses to this entry through the RSS 2.0 feed. You can skip to the end and leave a response. Pinging is currently not allowed.