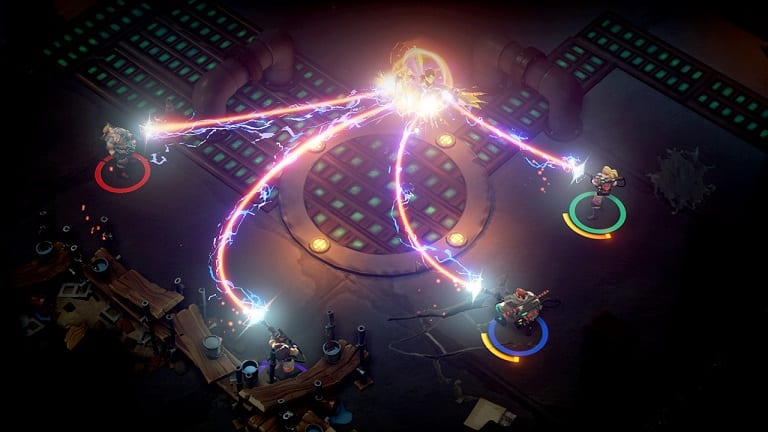 Go ahead, cross the streams.

It hasn’t been a smooth ride for the Ghostbusters reboot. The film initially drew the ire of fans for its decision to employ all female characters in the lead roles, its trailer was down voted almost a million times on YouTube and there was all kinds of ugliness with Leslie Jones’ Twitter account. While the film itself has garnered at least decent reviews, the franchise will still be forced to suffer more indignation with the release of the Ghostbusters video game.

If we may paraphrase Jay-Z, Ghostbusters has 99 problems but bad controls ain’t one. All the basics are covered: shoot, vent your weapon (a stand in for reloading), do an evasive roll, toss grenades and switch between your character-specific gun and the series’ signature proton projector. It adheres to genre norms and functions capably.

Of course, other than the moments when you have to capture ghosts it doesn’t feel like it has anything to do with Ghostbusters. The act of corralling a specter is OK — lasso it with the projector, hold the right stick to reel it in and hit the left trigger to slam it down to weaken it — but the button-mashing mini game for actually trapping the ghost gets tiring.

Shooting lacks precision as well. Part of it is that rotating your character feels a little sluggish, but it seems that your weapon fire is spraying in more a small cone than a concentrated straight line. There’s no visual feedback of your accuracy outside of minuscule heath bars above the ghosts, either, so it’s easy to switch targets before one is eliminated.

Rounding out your abilities is the P.K.E. meter, which is activated by pressing up on the d-pad. This is used to identify elements in the spirit realm and bring them into reality. Usually finding them will trigger some reward-heavy skirmish or directly result in collecting ectoplasm, the game’s currency.

Although this isn’t an ugly game, it’s as vanilla as they come. Generic levels stretch on and on across its six locations, and environmental interaction is non-existent for practical purposes — some objects can be shot and destroyed, but there’s never anything to detonate to hurt enemies. Character models are OK, but it’s easy to lose track of them when there’s a lot going on.

Enemy design and variety are areas in whcih Ghostbusters really struggles, though, with a cast that seems more at home in Fantasia. Yep, instead of pesky poltergeists you’ll spend much of your time shooting books, skulls and candlesticks. Oh, and zombies, too. There are a couple of familiar faces, such as Slimer and the dogs from the first film, but overall it’s a procession of uninspired foes.

Ray Parker Jr.’s famed theme song plays when you’re on the title screen, and it’s all downhill from there. Voice acting channels age-old stereotypes, and neither the music nor sound effects during gameplay will even register.

Set after the events of the recent film — and, full disclosure, we haven’t seen it — the stars of the movie are off fighting ghosts elsewhere. That leaves a foursome of generic archetypes to select from based on their weapon of choice: assault rifle, pistols, shotgun and Gatling gun. They’ll answer calls and eliminate ghosts, but there’s little story.

Each character has their own set of stats along with abilities that can be added or augmented by spending upgrade points. These are earned each time you level up, which is done by collecting ectoplasm. It’s a fine system, and there’s a noticeable difference as you upgrade things like weapon range and amount of time you can fire before needing to vent.

If you wanted to make a case for Ghostbusters, it would be that it’s accessible and is something you could play with younger kids via couch co-op. Unfortunately, what should be a bargain digital-only title is somehow a full-blown retail release, complete with the corresponding price tag. Considering how stretched it feels at around five hours, though, that’s grossly overpriced.

With its repetitive gameplay, uninspired enemies and shocking price point, Ghostbusters is the exact kind of movie-based cash-in that gamers rail against. Once it hits bargain bins those with younger kids might want to take a look. Until then, keep away.

By HC Green
Tags: Ghostbusters, Video Game Review
This entry was posted on Friday, July 22nd, 2016 at 12:44 am and is filed under Herija Green, Video Game Reviews. You can follow any responses to this entry through the RSS 2.0 feed. Both comments and pings are currently closed.