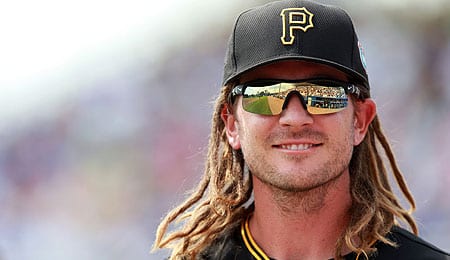 Are John Jaso and his dreads really going to block Josh Bell for leaving his mark? (ftw.usatoday.com)

Why the hell is Pittsburgh Pirates first base prospect Josh Bell still toiling away at Triple-A?

The Pirates are playing better lately, but losing ground on the Cardinals and still quite a bit back from threatening the NL Central-leading Cubs. However, at first base they continue to trot out the likes of unproductive John Jaso (who excels at looking like a fool trying to steal bases as you can see in the video below), punchless Sean Rodriguez and uninspiring David Freese (who, in fairness, has actually showed some power this year) while all Bell does down on the farm is rake.

In late-June, we recommended Bell as a waiver wire pick, and sure enough, he was recalled a couple of weeks later, but was sent back down after about five minutes despite going 2-for-2 with a grand salami, two walks and three runs scored.
His OPS through four plate appearances? Um, 3500.

It’ll do for a start.

Suddenly, the Pirates now want him to shift to the outfield down at Triple-A. Uh, okay. Apparently, Pittsburgh believes that Bell will not provide better glovework than Jaso. But surely a team near the bottom of the majors in home runs and middling at best in every other major hitting category could use the type of offensive infusion that Bell is capable of providing.

He ranked 29th in MLB’s Mid-Season prospect list, and why not? The dude’s an on-base machine with budding power.

Sure, Bell hasn’t been great in July (.264 BA, .358 slugging), but seems to be snapping out of it (3-for-6 with two RBI and two walks in the last two games) and has a 919 OPS for the season after recording a 946 mark in 35 games at Triple-A last year. Clearly, he’s mastered this level despite the fact his K rate is up this season.

The Pirates have plenty of young talent on the way that they need to clear space for. Could Jaso be moved at the deadline to add help in another area and open the door for Bell? That sounds like a win-win move.

Bell can hit. Just give him a damn chance to prove it, Pittsburgh!

If we have to wait until September to see Bell again, maybe the Pirates’ streak of three straight years as a postseason team deserves to be snapped.

Now it’s your turn. Let us know in the comments below what kind of impact you think Bell will have for Fantasy owners.

By RotoRob
Tags: John Jaso, Josh Bell
This entry was posted on Friday, July 29th, 2016 at 12:34 pm and is filed under BASEBALL, Player profile, Prospects, RotoRob. You can follow any responses to this entry through the RSS 2.0 feed. Both comments and pings are currently closed.